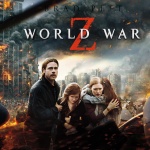 Where does one begin with such a convoluted movie? Especially when said reviewer swore he’d never watch it, or at least refused to watch it in theaters. Be that as it may, I knew i’d eventually screen the DVD once it was released to Red-box or some other rental avenue; I wasn’t going to purchase the thing, and thank Valhalla for that. As it seems, the criticisms I had before watching the movie (only seeing the previews) were replaced with other criticisms. But not everything regarding World War Z is horrible, while watching this popcorn flick, there were moments of real enjoyment. So, lets get to the nitty-gritty and find what made WWZ good, and what made WWZ not so good.

Ignoring the traditional chronological review format, lets tackle this beast one issue at a time. First, the overwhelming reason I swore up and down i’d never spend my hard earned dough on seeing this “zombie” movie in theaters: Zombie Ants and CGI. CGI, as we’ve discussed on this site before, has its place in cinema. Sci-fi movies are a good place to put good moments of CGI action; not horror movies. Horror, in my humble opinion, should remain traditional, but then again, is WWZ a horror movie? The PG-13 rating bothers me. Granted, some really good horror can be done on a PG-13 MPAA rating, consider: Insidious, Drag Me to Hell, 1408, The Sixth Sense, and The Possession as just a few examples. But this is a zombie movie. Can you name one zombie movie with a PG-13 rating?

The fact that no one else has made a PG-13 zombie movie isn’t the point. The point is that we’re talking about a zombie movie, plain and simple, and zombie movies require a certain quantity of gore. There were plenty of moment where I found myself expecting for something bloody to happen, such as: the entire movie…and also anytime someone was bitten or how about when Gerry chops (more like swipes, though) off Segen’s hand. Did you notice how she didn’t even bleed!! I’m sorry, you hack someones appendage with a bayonet, there will be blood…lots and lots of blood. Prime-time television has more blood and guts then this movie did. Consider the Walking Dead; granted, The Walking Dead is rated (somehow) PG-14, but still. The point is, couldn’t producers muster up a little more gore without tripping into a R-rating? And the even more pressing point: Zombie movies shouldn’t even be done on a PG-13 rating. All you get is disappointment. Sure, there might be something wrong with us zombie horror fans, but we’ve been messed up for a long time, no need in changing the formula now.

As for CGI, my opinion on the matter has changed somewhat. It would seem near impossible, budget wise, to have scenes showing the zombie apocalypse on a global scale without the use of some CGI clips. Notice the two highlighted words there? Some and clips are key components on keeping CGI from going King Kong. Not that i’m a huge fan of the whole zombie ants thing, but those moments could have been better if only they had cut the screen times short a little. And since we’re on the subject of zombie ants: what genius marketed this movie based solely on those moments from the movie? Igits! Had they shown some of the other scenes without the mindless rage monsters piling on top of each other and knocking over buses, then maybe (big maybe) I would have seen the movie in theaters. There is an actual chance I might see the sequel (whenever that comes out!) because WWZ wasn’t all that bad. Here are some of the parts that I found to be good:

Bottom Line: The movie wasn’t as horrible as I originally thought. But, for a movie claiming to be a zombie flick, there was still a lot of let down. It’d be hard to pull off a good zombie movie on a PG-13 rating, though its not impossible. I’m not sure how the MPAA works, but i’m curious if they can up the ante by pushing for a PG-14 rating like The Walking Dead? Just saying, the whole severed hand and zero blood is still bugging me. And then again, the big issue with WWZ is that we cannot approach it with a Romero lens. WWZ is more akin to 28 Days Later and if looked at in that respect, it was a decent “zombie” plague movie, especially from a global perspective. If you missed WWZ in theaters, like me, go out and rent it; I still wouldn’t recommend buying it.