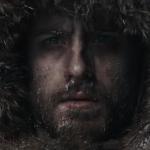 And here we are. We made it through yet another 31 days of Fright Fest. This was our third year running, and with each I think we’ve gotten better, adding more and more really cool movies. We could not have done this without the amazing writing from some stellar contributors. And we certainly appreciate readers such as yourself, taking time from your day to read our thoughts and ramblings on dark and twisted movies. So, without further ado, let’s get into this final review for 2018’s Fright Fest. As for vampire films, in the early to late 2000s, it seemed as if they had lost their bite (pun totally intended). The vampire as a monster had somewhere along the way from Dracula to Edward lost its sensibility of being in fact a monster. For me, 30 Days of Night was an answer to my lament for the return of scary vampires.  END_OF_DOCUMENT_TOKEN_TO_BE_REPLACED 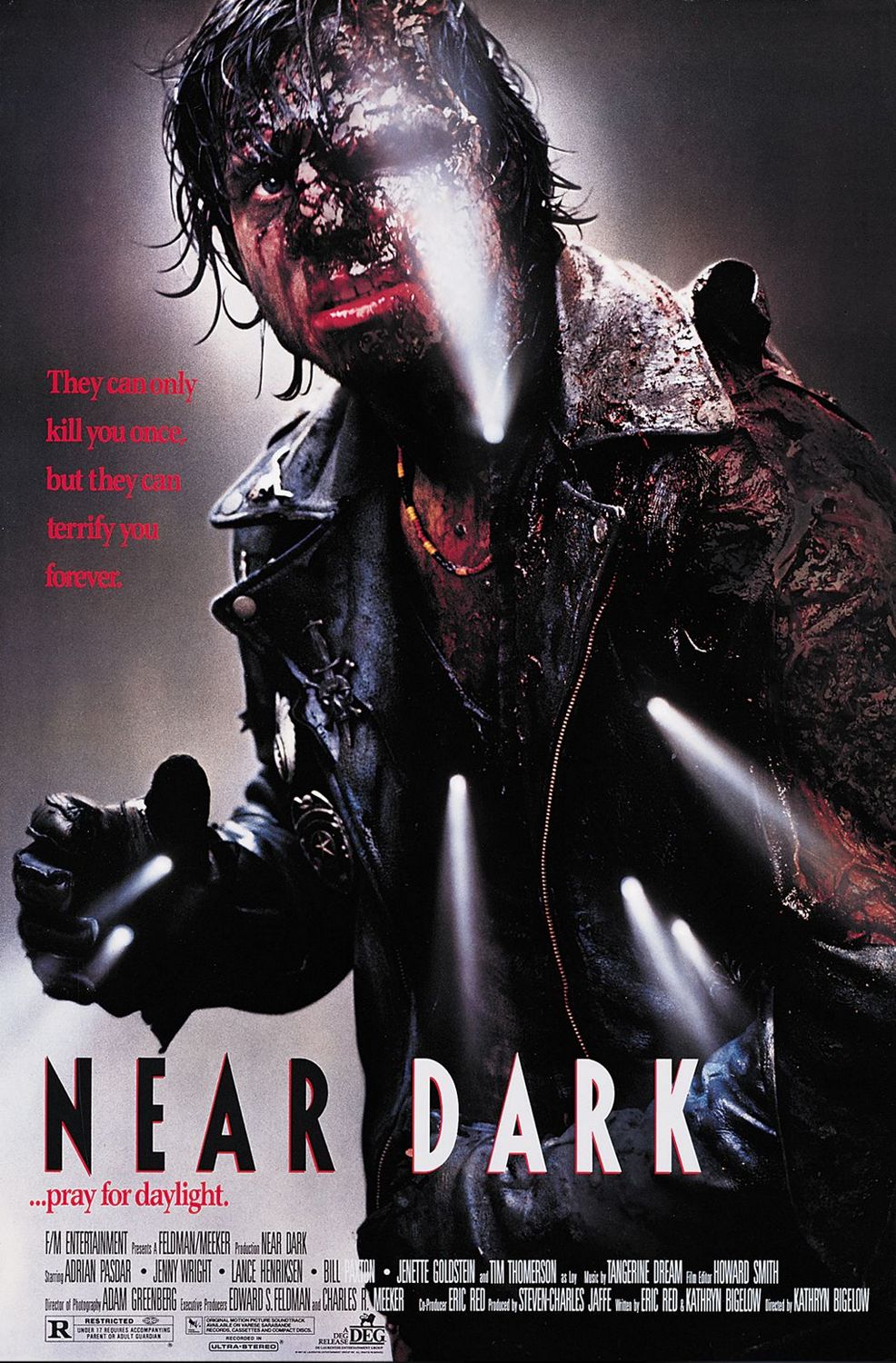 Growing up, my dad and I didn’t agree on many films. It might surprise one to know, but a preacher and his horror loving son aren’t going to have a lot in common when it comes to cinematic tastes, or much of anything really. Also, if you spell “Horror” a little different, that sentence takes on a whole new meaning, someone hit the rimshot sound effect for me. Despite the gulf between us, we did manage to connect on a handful of movies, The Last Starfighter¸ Enemy Mine, Predator, and the one you happen to be reading about right now, Near Dark. Maybe it was because the vampires didn’t act like the typical, supernatural vampires, maybe it’s because the western style distracted him from the fact he was watching a horror movie, or maybe he just liked it and I should stop analyzing why to better appreciate that we had one more movie to add to our very short list.  END_OF_DOCUMENT_TOKEN_TO_BE_REPLACED 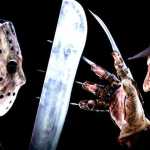 Well, heck-a-doodle-doo-doo-muh-bob-a-reeni—let’s find out what I thought, shall we?  END_OF_DOCUMENT_TOKEN_TO_BE_REPLACED

The Jigsaw killer strikes again a decade after his death, setting up several traps for five people who need to atone for their sins. This film follows a male and a female forensic pathologist as they help uncover clues as to how the Jigsaw killer has returned from the dead. Meanwhile, a team of detectives suspect that these two are the copycat killers. Find out for yourself whether or not Jigsaw faked his death! I mean… he is the only one able to do something like this, right? Or did he set up enough secret traps before his death to last a lifetime?

First, let’s discuss a little bit about the films prior to Jigsaw. The original film, Saw, was the most unique out of the lot. The budget wasn’t extremely high, and in comparison to the following films it did not nearly have the amount of gore that this series is so famous for. Most of the films follow an ongoing detective investigation trying to find the Jigsaw killer and rescue those still alive while we watch them try to escape the traps that the Jigsaw killer and his accomplices set up for them.  END_OF_DOCUMENT_TOKEN_TO_BE_REPLACED

Reviews in the Machine: The Ridge by Jeffery X Martin

For those who know me understand, I will never win awards for the worlds fastest reader. I see other bibliophiles and their Goodreads accomplishments and marvel. My own wife can sit down and consume a 800 page mega-novel in the span of a few days. Its insane. I don’t get how its even possible. But hey, to each their own pace, right? So, when a fast read, and I mean a good fast read, comes along, its worth celebrating. Such was the case when I started Jeffery X Martin’s new book, The Ridge on a Saturday morning and finished that night.  END_OF_DOCUMENT_TOKEN_TO_BE_REPLACED

This film opens with a scene somewhat mirroring the original opening scene from the very first Scream movie, but with a twist — the whole “Wanna play a game?” scenario with everything starting off somewhat flirty and harmless. This time, though, the killer calls Cotton Weary (Liev Schreiber) saying that he’s outside of his girlfriend’s bathroom. Of course, when Cotton hears this he rushes home to his girlfriend’s rescue… only to find her hiding, and, unknowingly, with the killer still in the house. Shortly after, they are both attacked, and neither make it out alive.  END_OF_DOCUMENT_TOKEN_TO_BE_REPLACED

While slasher films can be gritty they mostly stay within the realm of hokey, not in a bad way, but in a fun and enduring way. Slashers are those movies we watch when we want to turn our brains off for a while and watch some masked burnt mysterious whatever maniac do horrible things to teenagers. Serial killer movies however, while can be equally hokey, normally tend to lean towards the more serious of the two. Most serial killer movies that I’ve seen are dark and intrinsically layered films that force me to keep my brain working, to watch out for the clues, and to digest whatever metaphor or symbolism packed in bloody imagery that the director is intending for me to swallow. We’re talking Silence of the Lambs, Zodiac, Identity, American Psycho, Henry, and the list goes on. Se7en is no different.  END_OF_DOCUMENT_TOKEN_TO_BE_REPLACED

“The Legend of Lizzie Borden” from 1975, directed by Paul Wendkos, was a movie I had been dying to watch, both because I like to stomach anything Lizzie Borden-related and due to actress Elizabeth Montgomery. I’ve always been a fan of hers from growing up watching re-runs of “Bewitched” and she starred in the lead role as Lizzie Borden. “The Legend of Lizzie Borden” came out when I was just one-year-old, so I wasn’t one of those crowded around the TV watching it on ABC Movie of the Week when it aired, but I had read just how much it would have been controversial at the time for how much violence it showed. Violence, by the way, that doesn’t hold a candle to what we watch now, or would back then as the ‘80s approached, in terms of slasher films. If I had a been a bit older, we would have never been allowed to watch it in my house anyway. END_OF_DOCUMENT_TOKEN_TO_BE_REPLACED 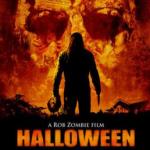 Imitation is often seen as a tribute to an artist; other times it is seen as a mockery and a laughable attempt to establish, oneself, in a world of other artists.  A question that should be asked, what separates the good imitations from the worst?

The answer is a little more underlying.

A work of imitation can branch off and become something different, something appreciated by others.  The difference is—Appreciation for the original work and artist—nothing more.

In 1978, John Carpenter set out and defined the slasher genre.  Many fans were introduced to their first masked serial killers: Michael Myers.  The original story was enough to send millions of fans into a terror filled adventure, murder and mayhem a-plenty.  Man escapes mental institution after murdering his sister twenty years prior and begins slashing and stabbing his way through Haddonfield, IL.  END_OF_DOCUMENT_TOKEN_TO_BE_REPLACED

WELCOME friends to a new year of “In Review.” As you no doubt have guessed, this year we’re running the gauntlet with Slashers & Serial Killers. To say we’ve got our work cut out for us would be an understatement. Thus far the review count looks to be well over 150 different movie reviews all spread throughout 2018 with our usual break in observance of the holiest of horror holidays, Freight Fest. Why such a high review count? There’s the love of course…the utter romanticism of this particular horror sub-genre–knowing the killer in us all by living vicariously through onscreen murderers and villains. Beginning as early as Psycho in 1960 and continuing on all the way into 2018, slasher and serial killer movies are alive then as they are today with hundreds of different movies to choice from. To kick things off, my movie of choice may seem a bit odd…allow me to explain.  END_OF_DOCUMENT_TOKEN_TO_BE_REPLACED