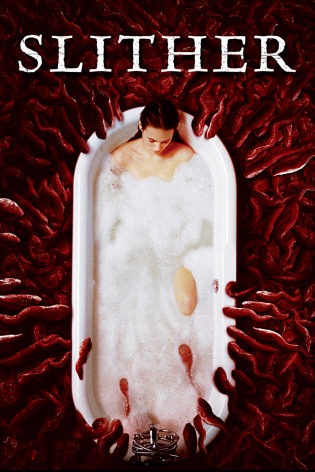 Again I find myself mesmerized by the complexity of the creature features subgenre. And as a first, thus far in our little series, we find ourselves in the midst of a horror-comedy within the creature feature mythology. The gory ridiculous atmosphere of Slither (2006) is no doubt the responsibility of its creator, directed no less than by Guardian of the Galaxy symphonist James Gunn. Now, as most already probably know but I’ll mention it here again, Gunn has an interesting repertoire of cinematic exploits. He was the director who took on the remake to Dawn of the Dead (1978), keeping certain elements whilst still maintaining itself as a stand alone movie ALL THE WHILE pleasing not just audiences, but fans of George A. Romero’s beloved classic. But Gunn is not without question…he did have a hand in those live-action Scooby-Doo movies and the not so cult-classic Tales from the Crapper. This weekend, apparently The Belko Experiment, in which Gunn wrote the screenplay, will finally be released to theaters, having started playing trailers off and on as far back as November of 2016, has already come under fire from critics. So where does that leave Slither? Well…I think I’ll leave that explanation on the shoulders of our esteemed guest contributor, Jonny Numb.

Universal’s decision to let James Gunn direct Slither was an act of faith that spoke to the studio’s appreciation of how his Dawn of the Dead screenplay – coupled with Zack Snyder’s direction – led that film to box-office success.

The result – a 1950s-styled creature feature that combined practical FX with CGI – was a pastiche with a disparate cast (including cult favorites Nathan Fillion and Michael Rooker, and rising star Elizabeth Banks) that had a mercilessly short theatrical run.

I get it because I wasn’t a fan of Slither when I first saw it on DVD. I can’t remember why it didn’t click for me – maybe because it leaned on “backwoods redneck” character types too much (and that specific type of humor); maybe because my taste in sci-fi is maddeningly specific; and maybe – just maybe – it was because I had yet to be exposed to the wonders of Captain Mal on Firefly.

In any event, I revisited the film last year (for the first time in a decade) and was surprised that my feelings toward it had improved. While problematic in places (mostly in the wobbly, tone-setting early going), Slither grows into a bizarre and sneakily subversive take on the sci-fi it’s paying loving homage to:

The Blob (either version). The Thing (Carpenter version). Invasion of the Body Snatchers (mostly the ‘50s version).

There are also subtle-to-obvious references to the works of David Cronenberg and Roman Polanski, as well as Gunn’s former tenure as a screenwriter for Troma (including a Lloyd Kaufman cameo); and keep an eye on the Main Street storefronts during the opening credits for more sly Easter Eggs.

Grant Grant (Rooker) is a macho sleazeball in cheesy glasses who’s married to trophy wife (and elementary-school teacher) Starla (Banks). Spurned by his wife’s refusal to fulfill her duty as willing sex object one night, Grant meets up with local bar girl Brenda (Brenda James). In a bit of cosmic irony, they find themselves in the woods, and Grant has feelings of remorse before he can consummate any carnal desires. More ironic still, this leads Grant to the discovery of a translucent egg-sac with a symbolically vaginal opening, one from which something shoots out, infecting him with an extraterrestrial parasite. After the transformed, meat-craving Grant impregnates Brenda, she becomes the “mother” to the alien invasion.

Once the parasites explode (literally), Slither really kicks into gear. Gleefully grotesque practical effects – and some CGI that hasn’t aged as well – ensue.

To make a hard right turn: does anyone really talk about Kylie (Tania Saulnier), and how she’s probably the smartest, most resourceful character in the movie?

Only on my most recent viewing did it occur to me that we see her not once (in the high-school classroom), but twice (in the crowd at the town’s “Deer Cheer” event) before being properly introduced around the family dinner table (where she makes reference to the “Japanese” design of her painted fingernails (tentacles much?). Her character is at the center of a great setpiece midway through, during which she’s taking a bath with her earbuds in, and winds up fending off a parasite with a curling iron. Even more so than the scene’s well-taken stylistic nods to A Nightmare on Elm Street and Shivers, notice how Gunn allows Kylie to react as rationally as the situation will allow, without turning it into an excuse for T&A or a gory money shot. When the tub parasite nearly shoots down her throat, Kylie briefly taps into the aliens’ shared consciousness – and the glimpses of havoc on an unnamed planet far, far away certainly foreshadows Gunn’s eventual segue into the world of high-budget comic-book blockbusters.

Rather ingeniously, the DVD cover for Slither – that of Kylie in the tub, being descended upon by thousands of squirming parasites – represents the film more accurately than most video-art concepts (which tend toward hyperbole). It’s unsubtle without really giving anything away, and Gunn subverts expectations for the scene itself by guiding it to a surprising conclusion. The sequence of events that follows the tub encounter is brilliantly rendered, and reminded me of Barbara’s full-moon escape from the farmhouse in Night of the Living Dead (yes, the 1990 remake).

There are other things, as well:

The comic relief of Mayor Jack MacReady (played by Brian De Palma regular Gregg Henry), who – in look and demeanor – bears an eerie resemblance to a certain boorish ex-reality-TV star. He’s paranoid, perpetually angry, casually misogynistic, and at one point asks if the town’s being “invaded by the Russkies.” Gunn’s smart handling ensures that we’re always laughing at this clown, and Henry is definitely in on the joke.

Meanwhile, Starla transitions from Grant’s doormat to a model of marriage to, eventually, a woman who wakes up to the fact that her husband’s internal ugliness has manifested on the outside in a way that’s rather poetic. Their final confrontation is a fine demonstration of Beauty no longer tolerating the Beast’s shit.

So maybe, finally, the film resembles Bride of the Monster (but in title only. Thank God).

One nagging question, though: even with the padlock on the basement door, how did the stench of all those dead pets not make its way through the vents in the Grant household?

Jon Weidler, aka Jonny Numb, is no stranger here on Machine Mean. He has contributed for us Abbott and Costello Meet The Mummy (1955) AND Clean, Shaven for our Fright Fest month back in October. Mr. Weidler works for the Commonwealth of Pennsylvania by day but is a podcast superhero by night. He co-hosts THE LAST KNOCK horror podcast under the moniker “Jonny Numb,” and is a regular contributor to the Crash Palace Productions and Loud Green Bird websites. His archived movie reviews can be found at numbviews.livejournal.com, and his social media handle is @JonnyNumb (Twitter & Letterboxd). You can read his review of A&C Meet Mummyhere.