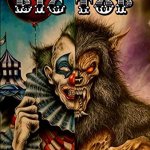 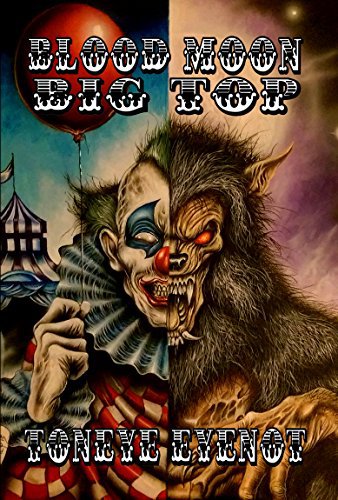 When Kendrick the drifter joins a circus and becomes Marbles the Clown, he discovers the art of transformation; an escape from the woes of his everyday life. An unfortunate encounter with a feral child in the woods, as the Full Moon prepares to meet the approaching dawn, sets off a gradual transformation beyond anything Marbles could imagine. His deterioration over the following two weeks leads to his apparent death and the circus moves on. Waking up in the morgue a few days later, the slow transformation of Marbles the Clown begins. In a desperate bid to catch up with the circus as it travels from town to town, city to city, Marbles embarks on a two-week journey of nightmare carnage and unconquerable insanity, finally reaching his destination in time for the real and terrifying transformation to take hold.

“…a fast-paced, engaging werewolf novella recounting the story of Marbles the Clown, a loner who finally finds a place for himself performing in a family circus. One of the fascinations of the book is the emphasis on the transformation itself and the sensations that Marbles undergoes. It is not at all a smooth ride, involving both physical suffering and psychological trauma. Marbles tries to resist the increasingly compelling drive to hunt, kill and eat human victims, even trying to limit his diet to creatures of the forest. Slowly his resistance is overwhelmed as he evolves from a human afflicted with lycanthropic urges to a soulless ravening beast. Another intriguing element is the care and attention provided to him by the members of his circus family. Marbles himself was a loner before he joined the circus and he stuck to himself, but he still gained the friendship and allegiance of the circus fraternity. Even in the depths of his transformation into a werewolf, there are touching scenes of support and camaraderie. The one human instinct that remains with Marbles is his desire to rejoin the circus that left him behind during the depths of his illness. And that, in fact, is where the book’s tumultuous climax occurs – inside the Big Top. Don’t get me wrong, Blood Moon Big Top is a rip-roaring page-turner, but it also finds time to explore the human side of the horrific transformation from a man into a beast. The writing is rich and lush, with just the right amount of description to establish atmosphere. Toneye Eyenot possesses strong narrative storytelling skills, which are very much in evidence in this classic werewolf tale. Highly recommended!”

“What a bloody good read, I received this book for an honest review. And I gotta say Toneye does not disappoint, it had everything , clowns, werewolves , murder , and cannibalism, I recommend to all fan’s of modern horror”

“Eyenot weaves a brutal lycanthropic tale about a man who becomes a beast. The mingling of clown horror with some truly epic werewolf savagery makes this a unique horror read. I read this in one sitting because I couldn’t put it down. This writer is one of my favorites.”

“Most people are terrified of clowns, and werewolves is old legends. This was a very interesting twist on the 2 combined.”

You can purchase YOUR copy of Blood Moon Big Top…………..

Toneye Eyenot hails from The Blue Mountains in Australia. Although writing horrible tales for the better part of 25 years, 2014 has seen his first published work in REJECTED For Content – Splattergore, through J. Ellington Ashton Press, an anthology showcasing alongside many other esteemed authors of the bloodsoaked word. BLOOD MOON BIG TOP is his latest release (Oct. 7, 2016) from J. Ellington Ashton Press. A werewolf/clown Horror novella. His first extended story, in the form of a Dark Fantasy/Horror novella, THE SCARLETT CURSE is book one in the Sacred Blade Of Profanity series, released through J. Ellington Ashton Press and available now in print and on Kindle. Book II in the series- JOSHUA’S FOLLY has also just been released through JEA Mar.13, 2016. Book III in the Sacred Blade Of Profanity series is currently being conjured. With more anthology appearances in both, REJECTED FOR CONTENT 2-Aberrant Menagerie and REJECTED FOR CONTENT 3-Vicious Vengeance, also Doorway To Death, Jeapers Creepers and Lost Gods And Forgotten Cities, and more in Cellar Door III – Animals/Hell II – Citizens by James Ward Kirk Fiction, as well as The Grays by James Ward Kirk fiction and more anthologies awaiting publication. Eyenot is also the editor for a werewolf themed anthology-FULL MOON SLAUGHTER.

Have you seen Late Phases? Finally! A new werewolf movie to keep my strange fascination were the lycanthrope myth sated, or for at least the time being. Hopefully maybe soon we’ll see some quality Mummy movies grace the silver screen…doubtful at that one. But we can always hope. Its no secret, I’ve got a special place in my heart for the classic Universal Monsters. I’m not at the age to have grown up watching the films. I found them in my adult years, and its probably better that I did. I don’t think most of the kids in my late phased (pun intended) Gen-X generation would have appreciated the classics…not as much as an adult would. Maybe I’m wrong, I’m sure there are a few out there that could, but overall, it is my opinion that the classics are appreciated more by a more mature audience. My appreciation stems from my studies in history thru film. Looking back at society thru the looking glass of cinema is a fascinating way of deciphering prevalent thoughts and themes and attitudes of the day in which the movie was made. The original Universal classics, as such, can be both an entertaining as hell movie and a look into the concerns of the past. Werewolf movies are one of my favorite forms of metaphor. Much how I gravitate toward Romero-esk zombie tales, likewise, I gravitate toward the tradition of werewolf created by Curt Siodmak. Curt wrote the original Universal tale, The Wolf Man (1941) and portrayed the bipedal beast as more of a Greek tragedy, where the monster is also the victim, having no control over his inner demon, per say. Late Phases seems to keep to this tradition whilst also moving the mythos a step farther.

Ambrose McKinley; a fiercely independent, yet blind Vietnam War veteran and his seeing eye dog are moved into a retirement community at the edge of a forest. Willful and adamant that he can live on his own, he and his son Will are clearly not on the best of terms. He meets three neighbor women; Gloria, Anna and Victoria, who; while at first admiring Ambrose, are quickly put off by his rough attitude toward them. He meets his neighbor Delores, who shares the duplex with him. That night, during a full moon, something breaks into Delores’ kitchen and brutally slashes her to death. Ambrose hears the commotion and is also attacked by a massive werewolf. His dog comes to his defense as Ambrose struggles to find his gun, he manages to deter the creature, but his dog is mortally wounded. The next day, the police find him cradling his dog, and despite the destruction and his claims of the attack, it is shrugged off as a home invasion. With no one to believe his tale, Ambrose quickly works at preparing for the next full moon and soon discovers the threat is not from outside, but rather from inside this seemingly quiet retiree community.

The Meaning of it All…

And there you go. Plenty of symbolism to keep even the most jaded film graduate student satisfied, while also giving us horror nerds another allegorical tale to place on the shelf of werewolf lore. Ambrose verses the werewolf is an obvious story about how old bones can find purpose and keeps to the Curt Siodmak tradition…with one step farther. The monster here, while struggling at first, in the end accepts his plight and goes about turning other would-be victims into beasts themselves. Religion and faith find their way into the story too, as the priest, Father Roger is summed and cast way and ultimately killed (oops, SPOILERS!). There is also a redemption story between Ambrose and his son, Will. The movie has plenty of heart and even some humor to balance the drama and terror. But is it entertaining? 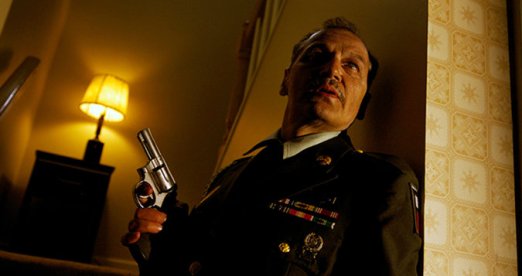 Late Phases was very entertaining. There are certainly some bumps in the road. While the use of practical effects should be applauded, there were a few moments where the effects came across as silly. And I’m mostly talking about the werewolf costume. The transformation scenes are respectable, though does not overshadow Rick Baker’s fantastic work in An American Werewolf in London. I’d say, the transformation effects here were more close to Rob Bottin’s work in The Howling. Other then the effects, the pace was steady. There was an absence of exposition, which I found refreshing. Ambrose, played by Nick Damici, was fantastic. I love seeing crusty veteran movies, especially in horror flicks as it is something I tend to gravitate toward in my own writings. If you haven’t seen Late Phases yet, it’s still on Netflix. Make it a night. Pop some popcorn and enjoy a rather fury tale of a blind Vietnam veteran verses the monotony of retirement.