Is Robocop (2014) a political movie? This is my question that I want you to consider as we discuss certain reoccurring themes throughout the film. For starters, yes I know I’m way behind the curve here for a movie review. What can I say? I missed Robocop in theaters and was only able to finally sit down and watch it over this past weekend. And to my surprise, this was not the 1987 version of Robocop. Sometimes remakes go to far to re-imagine or recreate the nostalgic feel of the original, and while this Robocop has certain 80’s-esk qualities, it is in itself, its own movie. The 1987 Robocop was…well..to put it bluntly a 1970’s grindhouse picture filmed in the 1980’s. Grindhouse (or savage cinema) is all about random acts of violence, but not any ole violence; grindhouse overexposes the audience to violence in order to send a cultural/political message about the time in which the movie was made. In the 1970’s, it was about Vietnam and Watergate and all that mess and disillusionment. The 1987 Robocop was giving a magnificent nod toward the over-consumption, over-consumerism, over-cooperated culture America had entwined herself during the 1980’s with over the top, albeit grotesque, hyper-violence. As film historian William Latham has noted, “seeing a corporation as the ultimate savior and the villain at the same time, where a man becomes a product, gave [Robocop] a special meaning in the 1980’s.” If we boil it down, the message of a grindhouse picture during the 70’s is the same as it is during the 1980’s, which is to say: Does the end justify the means? My question before you today is if Robocop (2014) is still a political movie? We’ve left behind the 20th century, some fourteen years now. Does the same message of justifiable means linger on in the 21st century? Do our ends justify our means? Instead of going through the entire film (which would take a while to digest), we’ll discuss two of the most powerful themes dominate in this new Robo-endeavor.

Robocop starts off with Samuel L. Jackson, not a bad way to start a film, playing the part of Pat Novak, a television talk show host (something similar to what you can find on Fox’s Bill O’Reilly Factor) giving a discussion over the use of a unmanned police robots in the United States. His stance is very clear, stating: “Omnicorp law enforcement robots are being used in every country of the world, except our own….why are we [Americans] so robophobic?”  To prove his point, Jackson’s character, Novak, cuts from his monologue to a film crew broadcasting from a Iran-esk country where Omnicorp “peacekeepers” are demonstrating a live-action sweep of a recently pacified neighborhood. Novak’s positive position is juxtaposed with close ups of the neighborhood population whose faces are a combination of fear, resentment, confusion, violation, and anger. As the film crew continues their broadcast, we discover that not everyone has accepted pacification. There is a small group of suicide bombers that are planning to strike back. Their attempt fails, obviously, but just when we’re thinking the end justifies the means, the young son of one of the suicide bombers runs out into the street to join his father carrying a kitchen knife. One of the larger bipedal tank-like drones warns the boy “to drop his weapon.” Out of fear, no doubt, the boy refuses and as the camera pans away, we hear gun fire in the background. Pat Novak will tell you, very bluntly that the ends justify the means, because “those droids just saved my coworker,” but did they? His comment about the safety of the film crew is another juxtaposition, this time against the death of the young boy with the kitchen knife. This scene may have a different ambience for you; for me the message is about our current use of unmanned drones in foreign operations and the current debate on drone use over U.S. soil. The beginning scene here begs the question: does the use of drones to keep soldiers safe a justifiable end to the means of using drones in foreign and domestic operations were the loss of innocence could have been avoided?

We cut away from Pat Novak’s lingering lament for our robophobic culture and arrive in a near-future Detroit. Corruption abounds and sets the main catalysts in motion setting up the creation of Robocop. Raymond Sellars’ argument before a legislative committee, that drones do not feel anger or resentment or prejudice, but act according to the limits of the law. And on the other end of the pendulum is Senator Hubert Dreyfuss whose sole purpose throughout the film is to defend the legislation in place that prevents the use of unmanned drones in police duties because, according to Sen. Dreyfuss, machines cannot experience what it is like to kill. They have no feeling toward killing and as such cannot conduct themselves in a manner in which life has value. This back and forth is somewhat of a dual allegorical picture of our current political situation and the “means justifying the ends” question throughout the film.

While all this is contemporary and interesting, it does not compare to the second most powerful scene in Robocop (2014). Ignore Alex Murphy’s  flat superhero-esk character for a moment and focus on his resurrection as Robocop. There is really a lot to chew on here, lots of ethical questions and metaphysical ones to be sure, such as the meaning of free will and the illusion of it and all that jazz, but what I want to look at is the imagery of amputees, especially wartime amputees, that becomes a bigger more meaningful part of the movie. When we get to the “lets put a man in a machine” part we’ve all seen in the trailers and Keaton’s spectacular acting, we open up in one of the research and development/rehabilitation areas within Omnicorp. We know its Omnicorp because of the technicians and doctors and the fancy sign on the door, right? But take all that away and limit this to single image and we get the feeling we’re in an army rehabilitation hospital. This could be a familiar scene at Walter Reed Medical Center or Brooke Army Medical who provide rehabilitation for OIF/OEF casualties who have sustained amputation or burns. The “man becoming a product” message William Latham commented on for the 1987 movie is still there, but for me it is not the most dominant message. This also is a major disconnect from the original film. In the 1987 version Alex dies from his wounds and is brought back to life via Omnicorp salvaging his brain and transplanting, along with his face, into a machine. No one knows about the operation until everyone knows about the operation. In the 2014 version, the transformation between man and machine is liken to extreme prosthetics. Alex Murphy did not die, he was saved with the operation. Now, the “saved” part comes under question when his wife (who must sign permission for Omnicorp to do this operation on Alex) asks “what kind of life will he have? You say you can save him, [but] what does that mean?” This, in my opinion, is a very power question, especially when it becomes juxtaposed with the image of the dissembled Murphy. In order for Murphy to face the reality of his situation, Dr. Dennett Norton, with the use of a mirror, begins to take away the robotic parts of Murphy, leaving only his organic self, which is basically only his face, brain, one hand (no arm, just the hand and nerves), and his heart and lungs that are contained in a sac like substance. And at the end, in a very horrific moment, Murphy cries out, “Jesus…there’s nothing left…there’s nothing left of me….”

The extreme amputation and prosthetic becomes a major issue throughout the remainder of the film. Even the vengeance quest is extremely short compared to the longevity of how Murphy deals with, or badly deals with, his new life as a man with prosthetics. Instead of a vengeance as justifiable means to an end, Murphy is put through the ringer of a post-Iraq/Afghanistan world. In many ways, Robocop (2014) becomes one of the first movies to actually question and illuminate PTSD, amputation, post-war family dynamic, legislation, political talk-show mongrels, and corruption. The piecing together of man and machine is a classic horror motif that draws all the way back to Frankenstein (1931) a movie that dealt with similar issues for a different post-war generation. As film historian David Skal has commented on the form of Frankenstein, the symbolization of the monster that represents “displaced, suppressed, and reshaped humans to conform with the machine world. Whale’s film depicted a monster squarely in the grip of this confusion, a pathetic figure caught, as it were, on the barbed wire between humanism and mechanism.” The “pathetic” tug we feel in the new Robocop is Alex’s self image or how he sees himself. After being shown what remains of his organic form, he demands never to be shown himself again, especially not to his wife. This self-loathing in a post-war image is another throwback to an earlier horror monster from another time, consider The Phantom of the Opera (1911), when Gaston Leroux writes, “Look! You want to see! See! Feast your eyes, glut your soul on my cursed ugliness!”

Assume the credits roll here. What did you think of the movie? Was it political? And most importantly, did the ends justify the means? Answers are never clear-cut. However, movies like Robocop help us deal with the mental processes we continue to struggle with, even though we may never arrive at same agreed upon destination. Its worth pondering and coming to our own conclusions. 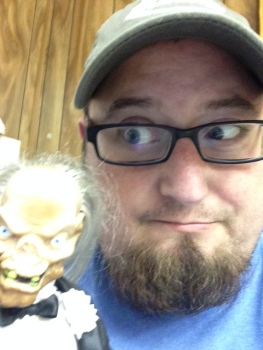