Swooping down from the Carpathian Mountains comes…Senior Drácula…. HOLD UP! You may be wondering, “But Thomas, haven’t you already published a review on Dracula?” Oh yes. I certainly have. If you’re brave enough to search the catacombs of Machine Mean, you’d be likely to stumble across a few. From memory, I’m fairly certain I’ve written a review on the Roxy Theater initial release of Dracula. I’ve written a post on Dwight Frye who played Renfield. And I’m pretty sure I’ve written a post celebrating Bela Lugosi, who we all know and was in fact buried as Dracula. But now comes the time, my friends, when we finally get to review the Spanish version of Dracula. According to film historians and most of everyone else in the biz, it was not uncommon for Universal Studios and most of Hollywood to produce Spanish or French or even German adaptations of their films. The unique thing about Drácula is that the Spanish version was filmed during the night on the same set and during the same time as the one we’ve all come to love and adore. That’s right folks, Dracula and Drácula were filmed at the same time, the American Todd Browning directed version during the day, and the Spanish George Melford during the night. The only real difference being the director, the cast, and subtle differences in wardrobe. In fact, according to Lupita Tovar, the Mexican-American actress who played Eva (love interest of both Harkin and Drácula), in the new introduction offered in the Universal Classic Monsters: Complete 30-Film Collection, said that because the Spanish film was done on the same set as the American version, the actors used the same markings on the floor that directed them where to stand while being filmed. In this way, Drácula is a near perfect shot-for-shot version of the original. 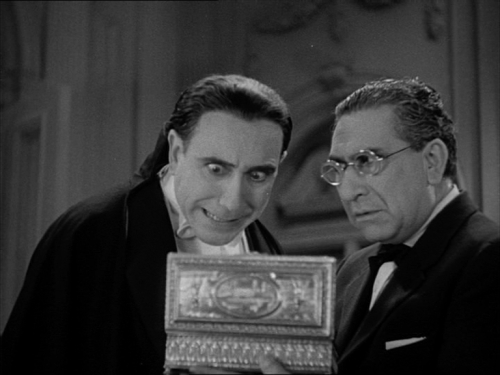 Now, given the near perfect similarities between the two films, there’s been a rumor among horror fanatics and run-of-the-mill fans alike. The rumor is that the Spanish directed Dracula is better than the American shot version. There is no secret of the troubles Todd Browning’s version faced. Watching the movie even now, one can see how it seems pieced together with more than a few mishaps on stage. The one saving grace was the powerful magnetism of the cast of actors, mostly Bela Lugosi and Dwight Frye (if you ask me). In transparency, I must confess, last night as I inserted the DVD, my thoughts went back to those rumors, of how the Spanish version was superior to the original. And after watching the wonderful Lupita Tovar give the introduction, one would think certainly the rumors were true. Well…I’m sure you’re asking by now, “Was it? Was the Spanish version better than the American?” Before we get into that, let’s back things up for a moment and fill in some gaps for those readers who have not yet watched Dracula or even read the Bram Stroker novelisation (poor souls).

Here is a synopsis of the American film:

The dashing, mysterious Count Dracula (Bela Lugosi), after hypnotizing clerk Renfield (Dwight Frye) into his mindless slave, travels to London and takes up residence in an old castle. Soon Dracula begins to wreak havoc, sucking the blood of young women and turning them into vampires. When he sets his sights on Mina (Helen Chandler), the daughter of a prominent doctor, vampire-hunter Van Helsing (Edward Van Sloan) is enlisted to put a stop to the count’s never-ending bloodlust.

And here is the synopsis of the Spanish film:

Soon after beginning work for Conde Dracula (Carlos Villarias), the clerk Renfield (Pablo Alvarez Rubio) learns that his employer is, in fact, a vampire who lives on human blood. Now under Dracula’s spell, Renfield helps his master travel to London, where the vampire takes another victim (Carmen Guerrero). Dracula also has eyes on the lovely Eva (Lupita Tovar), but her fiancé, Juan Harker (Barry Norton), and a wise professor named Van Helsing (Eduardo Arozamena) seek to stop him. 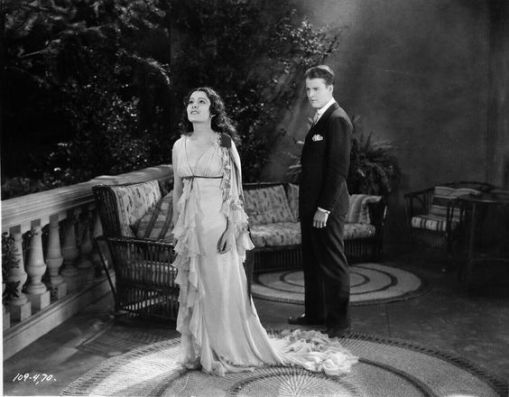 Some slight differences but otherwise pretty much the same. As it should be, given they’re both working with the same script. One of the biggest differences that I noticed right away was how much more easily it was to follow along with the plot of the Spanish version of Dracula. If that was more of my familiarity with the subject or not, I cannot say for certain, but I did find it easier this time around. And even though the Spanish crew was using the same sets as the American one, those sets seemed to have better lighting, maybe this has to do with them filming at night rather than during the day, but the mountains and rooms and villages looked brighter and I enjoyed getting another perspective of the uniqueness and craftsmanship of those designs. The costumes looked mirror image to those of the American version of the film, the one difference (that I noticed) was the design of dresses Eva and her friend wore, which is to say, a little more low cut in the breast region. Lupita Tovar comments on the same during her introduction of the film, quoting that the director had told her the dresses made them look sexy. Watching the film today, the design feels on point to what we normally see in more classy movies, however, I can imagine watching this back in 1931 during a more conservative film era. 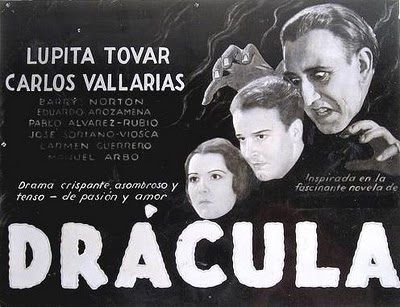 The real nitty-gritty for me boils down, not to stages or costumes or scripts or lighting, but the actors themselves. Did the Spanish-American actors outdo the originals? Perhaps I’m bias, seeing how I’m a huge fan of the original…that being said, I had some qualms with some of the performances in the Spanish version. The biggest star of Dracula will inevitably be Dracula. In the original, we were introduced to Bela Lugosi, a very exotic actor (at the time). With Drácula we were introduced to Carlos Villarias. Both actors were largely unknown, and both were recent immigrants to California, Lugosi hailing from Belguim and Carlos from Spain. Despite Carlos’s advantage of being able to act while speaking his native tongue, Bela to me was the better of the two Draculas. It is even more amazing when we consider how Bela was not yet proficient with the English language during the time when Dracula was being filmed and recited the script phonetically from memory. Now, I’m not saying Carlos was a bad actor. He was good, it just…his portrayal as Dracula felt very comedic to me. His facial expressions were, to be frank, hilarious, and thus it was hard to take him seriously.

Secondly, both versions of the lawyer/clerk Renfield were played marvelously by both Dwight Frye and Pablo Alvaerez Rubio. They both felt very empathetic and loathsome…however, again perhaps due to my bias as a fan of the original, Dwight Frye gave the role the extra added creepiness that brought the movie to a whole other level. I was completely fine with Pablo as Renfield until the boat scene with the dock crews searching for survivors and discover the poor clerk below deck. That image of Fyre looking up from the staircase and his maniacal giggle still gives me chills. All Pablo offered was laugh like some loon. And there were a few other scenes, like when Renfield crawled on the ground toward the fainted nurse, Dwight seemed to me like a spider, Pablo…well, I don’t know what he was doing.

Third, the only other really important character to get right would be Professor Van Helsing. In the American version, we are treated to the likes of Edward Van Sloan. In the Spanish version, we get Eduardo Arozamena. Both performances were pretty much the same, in fact, both actors even looked a lot alike. The only difference being the subtle charismatic acting of Van Sloan versus a more pragmatic acting by Arozamena. For me, personally, again perhaps due to my bias, I prefer the American version of Van Helsing. As for the damsel, a truism for most Universal Monster movies during this era, again both Mina (Helen Chandler) and Eva (Lupita Tovar) were very well done. But, looking closer, a think I prefer Lupita Tovar’s performance over Helen Chandler’s. She was not only more exotic, but she was also more sympathetic, in my opinion.

So…who was better? Dracula or Drácula. Were the rumors true? No, and yes. There were many aspects of the Spanish version that I enjoyed. The sets. The more developed story structure. Even some of the acting. But, I think, there is more to love with the original Dracula. Bela and Frye, for starters. And despite the issues with filming, Todd Browning brought a sort of stylization and his own strange vision to the quality of direction in Dracula that George Melford did not have. That’s not saying Drácula is not good. It certainly is and ought to be screened by any fan of horror or fan of the Universal monsters. I’m actually really happy the creators of the 30-movie boxset included this version. Otherwise, I may have never given the movie a chance. But when compared to the Dracula filmed during the day, there just are no substitutes.

Thomas S. Flowers is the published author of several character driven stories of dark fiction. He resides in Houston, Texas, with his wife and daughter. He is published with The Sinister Horror Company’s horror anthology The Black Room Manuscripts. His debut novel,Reinheit, is published with Shadow Work Publishing, along with The Incredible Zilch Von Whitstein and Lanmò His new Subdue Series, including both Dwelling and Emerging, are published with Limitless Publishing, LLC. In 2008, he was honorably discharged from the U.S. Army where he served for seven years, with three tours serving in Operation Iraqi Freedom. In 2014, Thomas graduated from University of Houston Clear Lake with a BA in History. He blogs at machinemean[dot]org, where he does author interviews and reviews on a wide range of strange yet oddly related topics.

Did you like what you read here? Be sure to subscribe to our SPAM FREE newsletter. Keep in the loop with new book releases, sales, giveaways, future articles, guest posts, and of course…a free eBook copy of Strange Authors, an anthology that includes some of the weirdest and vilest writers in the horror community. (click below).