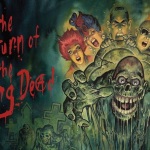 Kicking off Fright Fest 2016, we’ve got a fresh review for you to chew on. Creeping from the grave we’re going to talk a bit about Dan O’Bannon’s Return of the Living Dead. Now, it is important for us to distinguish who the director of the film is, versus who it had been and the writers involved with the project as well. Believe it or not, Return of Living Dead has a sort of complicated history. What started out as a sequel to Night of the Living Dead by legendary George A. Romero co-creator John Russo, when Russo and Romero parted ways after 1968 , according to the documentary provided in the newly released Shout! Factory Return of The Living Dead [Blu-Ray], Russo was able to retain the rights to use “Living Dead,” while Romero was free to work on his sequels to the original film.

However, when slotted director Tobe Hooper backed out to work on Lifeforce, producers brought on Dan “The Man” O’Bannon to not only polish the script but also to assume the directorial seat. O’Bannon agreed to the job under the condition he could radically alter the original Russo script. I’m not sure what Russo’s script was exactly, but given that he had written the story coming off of Night of the Living Dead, it was probably more serious in tone and akin to the work of George A. Romero. When O’Bannon took the reins, he did not want to produce something that resembled anything Romero had done or was working on. Understandable considering Romero’s zombie trilogy (Night, Dawn, Day) was all released before Return hit theaters in August 1985. He wanted something his own and completely unique. While Russo remained credited, I do not think much of his original story remained in the final product. Hense all the “Dan O’Bannon’s Return of the Living Dead” bit. This film was very much his own, written and directed and a living legacy to the late great director.

Before we continue with this review. How about a synopsis?

When foreman Frank (James Karen) shows new employee Freddy (Thom Mathews) a secret military experiment in a supply warehouse, the two klutzes accidentally release a gas that reanimates corpses into flesh-eating zombies.  Frank and Freddy seek the help of their boss (Clu Gulager) and a mysterious mortician (Don Calfa) to dispose of the remains of a still twitching cadaver. When the smoke from the crematoria rolls over the nearby cemetery, the undead wake and mayhem ensues and a group of punk rocker friends hanging out in the graveyard for their buddy Freddy must fight to survive the growing shambling horde of undead fiends.

Admittedly, growing up, I was very much a Romero-purist. My first horror love was Night of the Living Dead which my older sister introduced me to during one of our customary Friday night movie binges. I think I recall hearing about Return of the Living Dead, but never really gave it much interest in watching. I did watch Return of the Living Dead III back in the 90s when I was working at Blockbuster and rented the sucker on VHS. I was not impressed with that one in the least and assumed at that point that all Returns were just as dumb. I’m not one to shy away admitting when I’m wrong. And I was certainly wrong about the original Return of the Living Dead (1985). For the life of me, I cannot remember when I first watchedReturn of the Living Dead…but it had to have been within the last few years. Regardless, I was wrong. You heard it here first, folks. I WAS WRONG.

Despite the horror-comedy hijinks versus the very serious undertones of Romero’s work, Return of the Living Dead was a wonderfully fangtastic flick. While Romero may have the social commentary in the bag with his films, we cannot discredit the cultural significance of Return. The movie is bleak and ironic on a massive scale. The most obvious moment, of course, is the end (SPOILERS). Those characters fight and struggle and deal with so much bullshit and so much death to finally contact the Army for help and then get nuked only to see the same contaminated smoke rolling over new graves is laughably nihilistic.

In the end, we’re left to ask, “What was the point?” Much as what any decent horror does, it doesn’t answer questions to how we should go about doing things or solving difficult problems. Good horror movies force us to face our deepest darkest questions about ourselves. And that it what Return of the Living Dead precisely did, though not in the serious way most people are used to, but in an over-the-top parody of itself. My favorite scene, though, in the entire movie was when Frank, realizes that he’s about to go, full zombie, decides to sneak past his friends and climb inside the crematoria, immolating himself. Rumor us, James Karen didn’t want to join the other zombies outside in the cold ass prop-rain and asked if he could “go out” this way instead. Whatever really happened as to the reason, the addition of that scene adds to the wonderful bleakness of the movie.

Since the film’s original August 16, 1985, release, Return of the Living Dead has spread into a huuuuuge cult following. Most of the zombie-culture today gives thanks to this film over Romero’s work. Whenever you hear someone moan, “Braiiiinnnsss,” it’s thanks to this horror-comedy flick. There’s even a Simpson’s TreeHouse of Horror episode dedicated to Return of the Living Dead, the parody being when the zombies are hunting for brains, they pass over Homer Simpson. And domestically, the evidence is clear on which film audiences preferred. Releasing just a month or so ahead, Romero’s Day of the Dead grossed around $5.8 million, while Return of the Living Dead grossed around $14 million. And don’t get me started on the soundtrack. As far as movie soundtracks go, Return has one of the more memorable and fun lists of bands to jive to while trick-or-treaters are ringing your bell.  If you haven’t seen this movie yet, you need to. If not for the cultural significance, then for the fun, over-the-top zombie gags and punker hilariousness.

Thomas S. Flowers has a passion to create character-driven stories of dark fiction ranging from Shakespearean gore feasts to paranormal thrillers. Residing in the swamps of Houston, Texas, with his wife and daughter, his debut novel, Reinheit, was published with Shadow Work Publishing, along with The Incredible Zilch Von Whitstein, Apocalypse Meow, Lanmò, The Hobbsburg Horror, and FEAST. His veteran focused paranormal thriller series, The Subdue Series, including Dwelling, Emerging, Conceiving, and Converging, are published with Limitless Publishing, LLC. In 2008, he was honorably discharged from the U.S. Army where he served three tours in Operation Iraqi Freedom. In 2014, Thomas graduated from University of Houston-Clear Lake with a Bachelors in History. He blogs at machinemean[dot]org, where he reviews movies and books and hosts a gambit of guest writers who discuss a wide range of strange yet oddly related topics. You can follow Thomas at a safe distance by joining his author newsletter at http://goo.gl/2CozdE.