Universal Monsters in Review: The Creature Walks Among Us (1956) 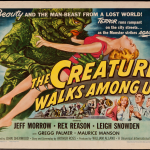 Welcome, ladies and gentlemen, to the last of Universal’s classic monsters. The Creature Walks Among Us, released in 1956 in 3D, was the final movie showcasing one of the original pillars of horror and the end to a rather lengthy franchise. All things considered, it is a very sad farewell. To say goodbye to an era of film now entombed in cinematic history, discussed only by historians and the most dedicated of film noir nerdom. But sometimes its okay to say goodbye. There’s a famous saying, stop me if you’ve heard this before, “You either die a hero, or you live long enough to see yourself become the villain.” In many respects, for whatever dollar bill reason, producers keep certain franchises going, long past their prime. I think the classic Universal Monsters could have probably ended with The Creature from the Black Lagoon back in 1954, but as it would seem, there was still a little life left in the series. The 1950s, the Atomic Age, the Red Scare Days, were breeding a different type of monster. For horror in America, there was either radiated beasts and scientific blunders OR invaders from space. There was no fear for the gothic tales of old anymore. Mythology wasn’t scary anymore, not knowing who your neighbors might be, not knowing if someone was going to invade your town, or not knowing if some mutated creature created from mankind’s atomic mistakes was going to come and bite them on the ass, that was scary. Times were changing, and The Creature Walks Among Us debuted at the curtain call, giving the long loved characters of Dracula, Frankenstein, The Wolfman, and The Mummy a somewhat provocative end. There is some interesting dualities at play in this film. Man verses nature. Regression verses progression (symbolized in this movie with the return to the jungle verses the coming space age). And of course, domestication and women’s suffrage (represented here between Dr. Barton and his wife, Marcia). All seemingly packed in tight inside an 80 min movie. Did it work? Was The Creature Walks Among Us a proper goodbye to a franchise spanning three decades? Lets see what our esteemed guest has to say.

THE CREATURE WALKS AMONG US

Today franchise film making is in vogue, no studio likes to just release a standalone solo film but rather pin their hopes on each installment being part of a wider cinematic universe. It’s therefore easy to grow weary of sequel after sequel and remakes of films barely a decade old. But way back in the 1950’s it was a much different story, horror films didn’t really get directly connected sequels.

While the Universal Monsters films were all painted on the same loose tapestry they didn’t really share any meaningful connections and the studio’s need for more meat for the grinder meant the later films suffered in terms of quality and consistency. Indeed in 1954, when The Creature From the Black Lagoon first crawled from the depths, Universal’s fortunes were already in decline and had been for many years. So when the titular Creature struck box office gold the studio wasted no time in green lighting a sequel – Revenge of the Creature (Clint Eastwood’s first film!). The film was a success for Universal’s coffers and so, once again, they craved more meat for the grinder. And so, in 1956, The Creature Walks Among Us hit multiplexes in the hopes of scaring cinema-goers out of their hard earned dollars.

As with Revenge, little to no explanation is given why the Creature is once again among us. In Revenge the monster is mercilessly gunned down by Policeman on a beach but reports of its death is (of course) greatly exaggerated so a team of scientists pursue the Creature from the Florida aquarium where it was captured in the prior film to the swampy Everglades. So douchebag scientist William Barton (Jeff Morrow) and his beautiful wife Marcia (Leigh Snowden) head out with professional hunter Jed Grant (Gregg Palmer), geneticist Thomas Morgan (Rex Reason), and biologists Borg (Maurice Manson) and Johnson (James Rawley). The relationship between Marcia (presumably here as bait given the Creature’s predilection for hot women in swimsuits), William and Jed is an overwrought love triangle that even has Jed attempting to rape Marcia not once but twice. Add to the mix her asshole of a husband and the rest of the cookie cutter cast soon become annoying distractions leading you to actually root for the Creature. In fact for the majority of the film’s run time the Creature is arguably the most human character and does little to live up to his monstrous reputation until the film’s climactic ending.

But I’m getting ahead of myself. The group track the monster down in the Everglades, recycling a lot of the underwater footage from the first film in the process, and during a clumsy fight the Creature inadvertently sets itself on fire and is hit by two shots of Grant’s tranquilizer gun causing it to collapse and be captured. When aboard the ship surgery on the monster’s body reveals that the fire has damaged the skin of the Creature and, as they investigate further, they soon realize that the outer layer of skin hid a layer of human-like skin beneath the surface, and as a result of this discovery the creature morphs and loses its gills and begins to breathe using humanoid lungs.

It’s here that Barton goes full mad scientist and in the grounds of his mansion begins to experiment with the Creature’s mind as well as his body, but the Creature has become rather enamoured with Barton’s wife (as you’d expect) and soon becomes the patsy for Barton’s jealous rage.  Barton catches Marcia and Grant swimming, and attempts to throw the hunter out but in a heated exchange Barton pistol-whips the hunter to death. He drags the body to the pen where the Creature lies captive in an attempt to shift the blame to the aquatic beast, but he has switch off the power to the pen’s electrified fence, and in a moment of predictable stupidity doesn’t have time to turn it back on. This gives the Creature an opportunity to escape and he storms after Barton, giving him his comeuppance when he catches up before lumbering off to the seaside, wading into the water. What’s important to note about this sequence is that the creature can no longer breathe underwater so, effectively, the monster is committing suicide. You can draw some deep meaning out of this sequence if you so wish, and indeed again the Creature is the most sympathetic character within the whole film. The whole ‘man is the real monster’ concept is something that litters genre media today but this film was one of the first to have a completely unlikable cast other than the monster, whether that was intentional on the part of the filmmakers or not is unclear but I like to think this subtext is there on purpose.

I’m sad to say that  the creature FX is sorely lacking in this installment, the prosthetics and make-up look distinctly cheap and the lithe athletic beast from the first film is, after it’s skin shedding, a distinctly larger and hulking behemoth by comparison. Giving some of the complexity mentioned above it’s a shame that the FX can’t equally match the opportunity for emotion a few story beats provide.

While the film has a lot of interesting ideas none are fully developed and are thrown out in preference of script brevity and cheap production values. Universal had an opportunity with this third chapter to broaden the mythology, expand and develop the world in which the beloved Creature inhabits but due to their desperate longing for their golden age with Dracula and Frankenstein they didn’t give the Creature adequate room to breathe.

Indeed there’s a metaphorical comparison with the Creature and Universal’s fortunes at the time, both formerly larger than life but now struggling to find their place in a world they no longer understand and therefore having to react quickly, and aggressively, at their change in circumstances. This misguided passion unfortunately means The Creature Walks Among Us falls significantly short of its lofty forebear but remains an important stepping stone in the journey of Universal’s hallowed monster canon.

Daniel Marc Chant is the published author of several terrifying tales, including: Maldicion, Burning House, and his newest venture, Mr. Robespierre.  Daniel is also one of the founders of The Sinister Horror Company, the publishing team that brought us such frights as, The Black Room Manuscripts and God Bomb!. You can follow Daniel on his blog, here.