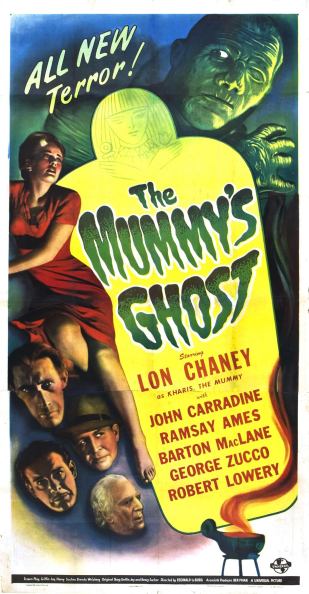 Just looking at Lon Chaney, one can easily imagine how much of a pain in the ass those prosthetics were. Countless hours in Jack Pierce’s chair. Being sculpted and wrapped in gauze. Unable to speak, really. Mostly immobile, except for those infamous lurching motionless typical for a mummy caricature. Starting before the break of dawn and by the end of the day, you’re ripping off the mask just to allow your skin to taste fresh air once more. The same for most icons who donned the monster grab, Boris Karloff being one of the first and most notable of Jack’s creations in Frankenstein and the original The Mummy. Glenn Strange also suffered as Frank. And not forgetting Bela Lugosi, who underwent hours on the slab as Frankenstein and Igor (I don’t think Dracula required any amount of pain, at least not cosmetically). What does all this have to do with The Mummy’s Ghost? Well, its no secret that Lon Chaney did not care for the role as Kharis, in either of the three time he played the role. However, there is a slight difference in his acting, I think, with this movie then with the predecessor, The Mummy’s Curse, also filmed in 1944. In Curse, Chaney seemed too constrictive. And the plot…well…phoned in, mostly. The mummy’s motivations did not make much sense to me in Curse; however, in Ghost, the motivations are made a little more clear and we can understand now why the mummy is so murderous. I’m not saying there are not any plot-holes. By George, there are plenty of those. But at least with Ghost, we can relate to the monster a little more, and you can also tell that Chaney was having more fun with the role, being able to act more than any other time he wore the rags, which says a lot for a character that cannot speak and is partially immobile. And the ending… Well, I think you’ve heard enough of me rambling. Lets see what our special guest has to say regarding The Mummy’s Ghost.

An ancient curse that has survived for 3,000 years is coming to America! In ancient Egypt, the princess Ananka and lowly commoner Kharis fell in love and pledged themselves eternally to each other. Although buried together, Kharis is given a sacred potion that grants him eternal life – and an eternity to search for his lost love. Lon Chaney, Jr. as Kharis and John Carradine as an Egyptian priest star in this engaging story of a couple’s true love that survives the centuries and the unending curse that haunts them. The Mummy’s Ghost unearths hope for romantics everywhere with its surprising finale!

As a kid, I loved the classic monster movies: Dracula. The Mummy. Creature From The Black Lagoon. Frankenstein. The Wolf Man. I eagerly devoured them all, along with reading the classic literature some of them were based on. I especially remember watching “Creature From the Black Lagoon” in 3-D sometime around 1983 when I lived in a suburb of Detroit. The technology wasn’t quite what we enjoy now, but as a 10-year-old boy, it was pretty cool.

However, I never delved deeper into the Universal Movies monster movies and watched the many sequels they created to capitalize on the originals’ successes (sound familiar?). Until Thomas so kindly invited me to take part in this series and sent me a list of movies to choose from, I had never even heard of many of them. So I sort of randomly chose one from the list of movies that were remaining on his list at that time. I’d always liked The Mummy so I chose one of its sequels, “The Mummy’s Ghost.”

From the opening scene set in an ancient Egyptian tomb, I was transported back to my childhood, remembering those black & white films from long ago, telling the tales of vampires, mad scientists, hirsute men and ancient Egyptians. Yet somehow, what was fun and enthralling as a kid has a different impact as an adult.

It was still a fun way to spend an hour, watching this 70-something year old film, but it didn’t capture my imagination quite the same way. Maybe I’ve just seen too many movies now. Or my expectations are higher. Or they just make better films now. Hmmm. Whatever the reason, I wished I could go back and feel that same sense of joy I felt when watching the original Universal films 30 years ago. 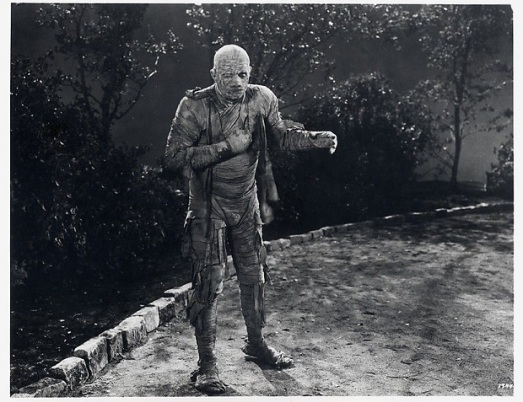 The story of “The Mummy’s Ghost” is nothing groundbreaking, as a princess falls in love with a commoner, and the pair end up cursed to eternally search for each other. Of course in this case, the princess is an ancient Egyptian princess reincarnated in a 1940s co-ed, and the commoner is a 3,000-year-old mummy brought back to life through a ritual performed by a mysterious priest.

Eventually the mummy is reunited with his long-lost love, but there is no happy ending for these two.

I did not watch the previous film in the Mummy series, but from things I read, it seems as though there were some continuity changes/issues with this film. Luckily, those weren’t an issue for me. That being said, here is what I did and didn’t like about “The Mummy’s Ghost.”

Lon Chaney, Jr., turns in a strong performance as the title character. In some scenes, he manages to bring a lot of emotion and character to a dead creature, or undead if you like. His mummy was not some mindless death machine, hell-bent on destruction. He was a star-crossed lover, searching for his beloved. Yes, he killed because, well this is a horror movie. But beyond that, he had a real motivation, a reason for his actions.

John Carradine, another legend of the Universal Monsters series, adds just the right supporting touch as Yusef Bay, who originally is helping unite the lovers, until he realizes his true feelings for Ananka, leading to his betrayal of Kharis. 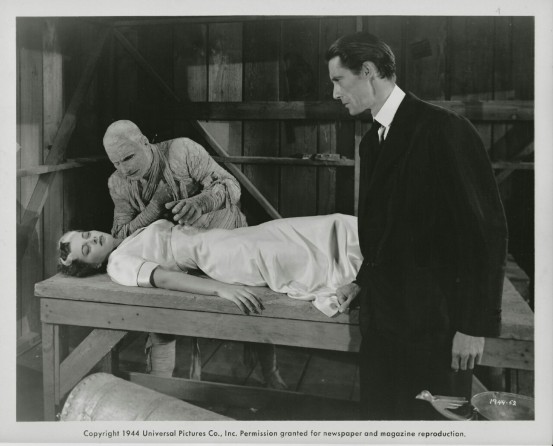 And the ending. Oh the ending. How can you not help but feel for the mummy. He finds his beloved, reborn in the body of a beautiful young woman, only to have her turn into a 3,000-year-old corpse at the end of the movie. It’s the ultimate story of lovers who are destined to be together, yet fate also seems to be against them. The story has been used in many a modern film, just usually without mummies and priests.

There was a little too much aimless shuffling/wandering by the mummy. And at times, the way they had him shuffle was just comical. At one point, he was shuffling sideways. Why would a mummy need to shuffle sideways? But that’s a pretty nitpicky point, to be honest.

When he’s not shuffling, he’s killing. But they are some of the most boring, lifeless (pun intended) deaths ever seen on-screen.

Even though I hadn’t seen the previous mummy films, the continuity lover in me wishes they would have kept the previous stories as part of this movie so it would make sense to longtime viewers.

The script does the veteran actors no favors, leaving them at times struggling to bring life to their characters and make you feel anything for them at all.

Luckily, there was only one more movie in the Mummy series after this. It was included on the same DVD with “The Mummy’s Ghost” but I haven’t dared to watch it yet. I probably will sometime when I’m desperate for something to watch, or just feel the need to watch a really bad movie.

Tim Busbey is an award-winning editor and journalist who currently is the Assistant Editor at Richland Source (www.RichlandSource.com) and Ashland Source (www.AshlandSource.com). Tim also does freelance book editing and is a partner with Erin Al-Mehairi in Hook of A Book Media and Publicity. When he’s not editing other people’s stories or reporting on all the happenings in Ashland, Ohio, Tim writes sci-fi, thrillers and horror.