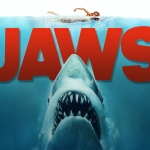 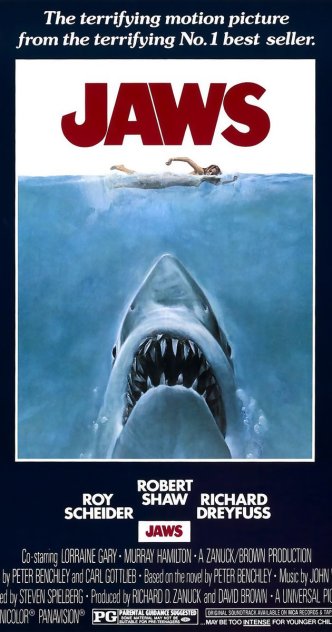 What is your greatest fear? Everyone is afraid of something, everyone. Some people are skittish about insects, usually particular ones like roaches or spiders. I for one get bugged out, forgive the pun, over roaches. I don’t know why there’s just something about those six-legged bugs that freak me the hell out. Maybe it’s because they are so intrusive. Maybe it’s something on an instinctual level, something to do with the fact that roaches have been on the earth far longer than humans have. They’ve survived greater tests, while we humans, on the other hand, have fundamentally just begun our evolutionary journey. To be perfectly honest, roaches are not my greatest fear. I’m not really afraid of roaches. I get freaked out by them, sure. But to say they conjure from me that primitive nonsensical non-rational feeling of terror, they do not. Do you know what does? The ocean. More particular, sharks. Have been since I was young. And I blame two things for my unconditional dread of the deep blue, the Discovery Channel’s Shark Week program…and Jaws. Why? Why not! Have you seen a shark? They are the apex predators in the water. And me, personally, I’m rather fond of land. Irrational or not, sharks are bloody huge with jagged rows of sharp teeth, the quintessential image of horror. And I’ll leave it to our guest author to tell you why Jaws is probably one of the most terrifying of all Creature Features.

By: Chad A. Clark

In the history of cinematic scoring, there has been a ton of legendary work. The landscape is about as rich and varied as the movies themselves. However, one theme stands out above all the rest as one of the most evocative, one that, whenever you hear it, you’re going to have a reaction. And the composer, John Williams, managed to accomplish it with two notes. Daaaaa-dum.

Seriously, chances are you already know what I’m referring to, just by reading it. It’s a movie theme that will stay with us until the end of time. And if you are roughly of my generation and disposition, it is a movie that has forever scarred you whenever you dare to swim in open water.

The irony about Jaws is that many people likely don’t even consider it to be a horror movie. Maybe because, instead of serial killers or vampires or zombie clown nazis, it’s about a fish.

And yes. Sharks are fish, not mammals.

Don’t lie, you were thinking it.

Anyway, while Jaws might not be a film that people would classify as horror, there has been no other film that has had such a long-lasting effect on my psyche. I wasn’t lying or being sarcastic at the outset. I have never been comfortable swimming in anything other than a pool. Even in fresh water ponds and lakes, I’m usually convinced that a twenty-five-foot shark is poised to drag me to a watery grave.

The shark in Jaws is no different than any other horror movie monster, it just happens to be based on a real world animal. But real sharks don’t act like that. Real sharks don’t have those kinds of proportions. Or at least, they’re very rare. The shots in the film of Richard Dreyfuss’ character underwater in the shark cage? They did that by putting a tiny person in a miniaturized cage to make the sharks look bigger than they really are. The shark in Jaws is a caricature.

It’s a monster. Of the worst kind.

Jaw’s (I’m just going to start using that as if it’s the shark’s name) is unrelenting. Jaw’s don’t give a damn who you are, what your hopes and dreams are. Jaw’s looks at you and he sees a warm-blooded, walking and talking snack. He sees you when you’re blissfully unaware, paddling away until those teeth clamp down and that’s all she wrote. Jaw’s comes along as a massive metaphor for our own mortality and takes anyone in its path and turns them into digestive material.

Well, unless you’re Roy Scheider. Then you can beat him. I guess.

I think part of what makes Jaws brilliant as a creature is how little we see of him in the film. Other than some images of his face and head, some teeth gnashing and blood and gurgling, we don’t really see him until the very end of the film. Otherwise, he is mostly an ominous presence in the water, something that can show up at any time.

One of my favorite moments in the film is so terrifying and graphic but at the same time is so straight forward, you almost miss it. It’s the shot of the boy being attacked while on his inflatable raft. It happens far off from shore and all you see, through the crowd of other swimmers is something come up out of the water. He’s knocked off the raft and as he rolls, there is this fountain of blood up into the air. It happens in a few seconds and almost goes unnoticed. There is this moment of shocked silence before the whole beach becomes bedlam as everyone scrambles for shore. That moment in the film has stayed with me for so long. Just seeing a casual, relaxing environment turned instantly into a killing field is classic and brilliantly done. The speed and viciousness of the kill is still chilling to watch for me, even after so many years.

I have been scared plenty of times by movies. The slasher movies of the eighties scared the crap out of me and there have been plenty of supernatural based films that have had me up at night. But for the most part, the effect of those films is temporary and fades with time. I have never lost the inherent, fundamental fear that was planted into my root programming by seeing Jaws. It is a movie that forever changed me, as well as my ability to ever comfortably swim again.

Chad A. Clark is a frequent flyer here on Machine Mean. He has reviewed for us before with commentary on House of Dracula (1945) and House of 1000 Corpses and Jeepers Creepers. Mr. Clark is a midwestern author of horror and science fiction. His artistic roots can be traced back to the golden era of horror literature, Stephen King and Robert McCammon being large influences. His love for horror began as well in the classic horror franchises of the eighties. He resides in Iowa with his wife and two sons. Clark’s debut novel, Borrowed Time, was published in 2014. His second novel, A Shade for Every Season was released in 2015, and in 2016 Clark published Behind Our Walls, a dark look at the human condition set in a post-apocalyptic world. You can keep up with all of Mr. Clark’s works by following him on Amazon here.