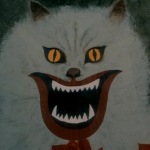 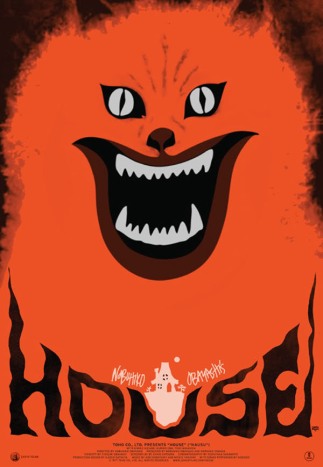 Some films you watch because you want to, they’re your usual type of fare. Be it horror, action or zombie films, we all have a certain type of film that irrespective of what we’ve heard from other people, we’ll watch. Then there are the ones that you get from recommendations, they’re not that frequent, and usually go one of two ways. You either love them, or hate them, and cut the aforementioned person from your life. Cos, let’s face it, no one needs that kind of person in their lives.

Then…and there is a point to my rambling, honest, there are the films that offer you a glimpse of something a little different. This is where HOUSE, or HAUSU steps through the doorway, and waves at you, whilst brandishing a bloodied cartoon knife.

I was first alerted to its existence whilst looking through a list of bizarro horror films. From the two paragraph synopsis, I knew that I had to see it. For the avoidance of doubt, this is the Japanese film, called HOUSE, not the 1986 American version. If you’re expecting something on that, well…yeah, you’re in for a number of WTF moments.

See, there is another type of film you watch, and these are the rarest of all, they’re the ones where they are an ‘experience’. Horror films, in the main, don’t really appeal to me. I find that they tend to be filled with tropes, and just aren’t really my bag. But you watch zombie films I hear you cry! 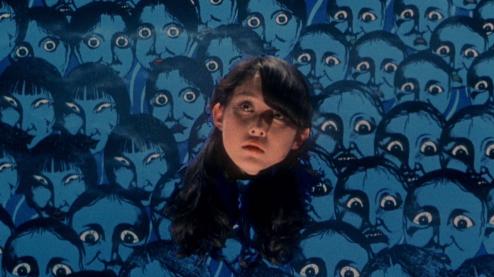 Yes, yes I do, but see rule number 1. They are my bag, I love them, and I don’t care that you have to watch three or four to see something even remotely different, because of well…zombies.

HAUSU though, well, nothing can quite prepare you for the spectacle you’re about to witness. Reading about it, the film itself was greenlit by Toho studios for TWO YEARS, before it was made. A whole assortment of directors severed it, mainly because they thought it would be their death knoll. This is in part due to the fact that a lot of the film came about as a result of the writer’s daughter.

And to be honest, it shows.

Let’s get the bad out of the way now, lest it cling to the hull of our already heavily barnacled rowboat, and capsize us. The acting is so wooden, it makes enough to form a whole fleet of rowboats. The plot, if you can call it that, is utter BS. The animation, terrible, effects in general, utter shonky, yet none of that matters one jot. 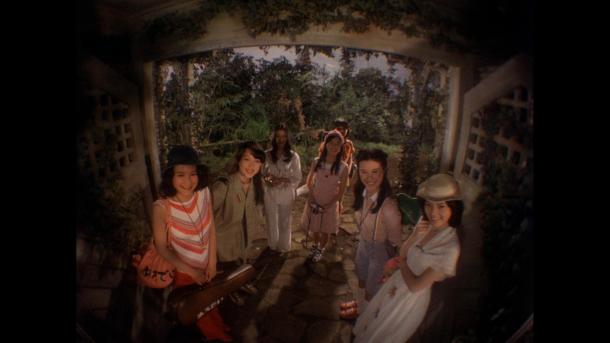 HAUSU is one helluva odd film to watch, one that you need to switch off that little piece of your brain, which tries to ground what you’re seeing into any semblance of ‘normal’.

So what the hell is it about? A bunch of school girls prepare for a summer way, except one, Angel, who is looking forward to some time away with her father, who has been working in Italy on film scores. He returns, with joyous news! They will be going with his new squeeze, Ryoko, who has a permanently waving scarf, and a penchant for stiff handshakes. Well, this does not please Angel, who scurries off to her room and reminisces about her dead mum. In the process, is reminded of her auntie, who, as luck would have it, lives in a big house all by herself.

Casually inviting herself and her mates for the summer, she waits eagerly by the post-box, with a white fluffy cat, that turns up out of nowhere. Her aunt replies and says she would love to see them all. So off they go…

What follows is the girls disappearing one at a time. Conveniently, they are all called things like Prof (wears glasses), Mac (eats a lot), Fantasy ( a bit of a daydreamer) and Kung Fu, which I bet you’ll never work out what she does. 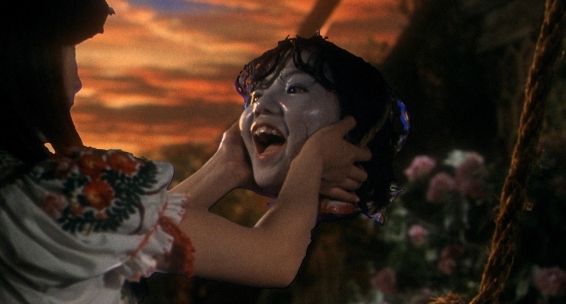 The way they go missing is just so comical, that you’re not sure if it actually happened. Obviously, with it being nigh on forty years old, it looks dated, but the director intentionally made the effects bad. I mean, that’s taking pride in your work to a whole new level. I don’t even know that I would still have a job if I applied that logic to my own vocation:

WORK: “So…Duncan, we called you into this meeting today, as we asked you to do this urgent database update.

WORK: “One which was necessary to stop us losing our entire book of business.”

ME: “Oh yes, I felt really humbled that you asked me to do that, pretty big honour, I have to admit.”

WORK: “So, why did you debone a swordfish and play a medley of Ska songs on its skeleton?”

It just wouldn’t work, would it?

Or would it…I’ll save that for another day. 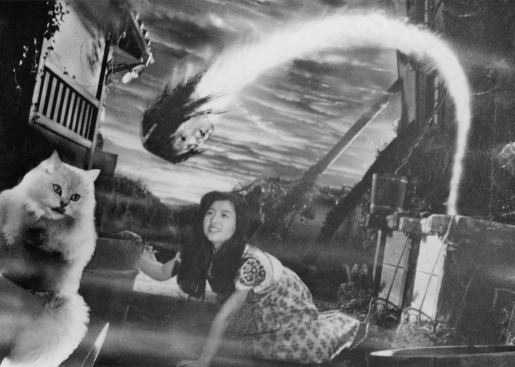 Anyway, it is an unusual approach, and in any other film, it would have made it ridiculous. But HAUSU, is already light years ahead of you, presiding in the Ridiculous nebula, part of the Ridiculous galaxy. How might you ask? Well, you have a man fall down stairs, slide around on the floor, stop-motion style, before having a bucket stuck on his arse. This serves as his reason as to why he can’t drive the girls to the house.

How the hell can you try and make that shit legitimate?

You just can’t, so the only thing you can do, embrace it, know what you’re doing is so utterly mental, that all you can do, is push the envelope some more until it ruddy well works.

THAT is the beauty of this film. So many scenes are just filled with my internal monologue going, “What the actual fuck is going on?” I’m not gonna list them, as you really do need to spend some time and watch it for yourself, even if it’s just the once. 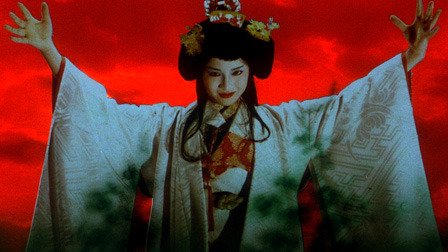 As for horror, the effects kybosh any real chance of building up suspense or dread, and the sharp left turns, which make little sense, also remove any shock value. Again, though, it doesn’t matter. If you come into this film expecting a tight narrative, kickass effects and gasping shocks and turns, you chose poorly.

So why the hell should you watch it? I get ya, your time is precious, you have a million and one other things you could be doing. There are pigs to scrub down, flame wars to ignite on social media, Machiavellian plans to hatch. I will ask you but one question…do you want to watch something which is genuinely different than 95% of the other films you will watch during your life? If you do, then give it a crack. Revel in its awfulness, laugh at the effects, but most of all, just enjoy a film that will live long in your head.

HAUSU is like that one person you know, who you see only fleetingly, but for the brief time you do, you see how wonderful true strangeness can be. 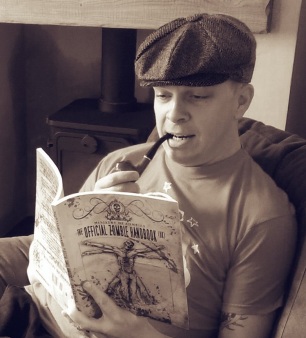 Living in a hollowed out pumpkin, Duncan P. Bradshaw finds October the most troublesome of months, as people become intent on sticking flaming candles into the midst of his happy abode. In fact, the only good thing to come about from it is the copious amount of candy that he steals from passers-by. When they have all sodded right off, he retires to the tip of the stalk, which affords him excellent views of the neighbourhood. As the rest of the street slumbers, he writes down the weird and wonderful thoughts that have built up during the day, like the plaque. Find out what he writes down, by checking out his website http://duncanpbradshaw.co.uk/ or follow him on Facebook, where he does all manner of things https://www.facebook.com/duncanpbradshaw/