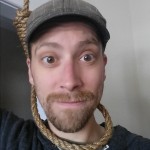 Greetings Boils and Ghouls, on this episode of Opus Questions we’ll be hearing from the fiendishly talented Duncan Ralston. If you’ve been following this chain of segments on Machine Mean, Opus Questions is all about finding out what horror writers enjoy reading, what books tickle their fancy, what novelizations have terrified them, haunted them, forced them to turn on the light. Opus Questions is also about discovering what books have inspired up and coming wordsmiths of macabre. For every writer has their favorites, the ones they hold dear. Because part of being a good writer, you have to be a good reader. You have to read — prolifically (grammar?).  So, to keep things interesting and to be a bit villainess on my part, I’ve asked my guests to tell us what their favorite books are and why. And they can pick only two. You heard me. Just two!!! (laughs manically) So, without further ado, here is…

When someone asks “What’s your favorite (book, movie, TV series, song)?” I find the answer about as difficult as choosing what to order when everything on the menu looks good and I haven’t eaten since breakfast. For the sake of Thomas’s request, I’ve narrowed it down to the two books that influenced me to start writing. Stephen King’s Night Shift, and Clive Barker’s Books of Blood were my first journeys into their terrifying minds, and still resonate with me long after reading. They aren’t necessarily my all-time “favorites,” but they’ve inspired me to achieve similar heights in my own writing.

Night Shift was on the shelf at the old cottage, and its creepy cover called to me… You may know the one: the hand covered in eyeballs and wrapped in gauze (this was the double cover, with the eyes peeking out from holes in the flap). It refers to the story “I Am the Doorway,” where an astronaut brings home an alien stowaway that uses him to peek into our world. Night Shift effectively blends science fiction, horror, terror (if you don’t know the difference, pick up his seminal non-fiction book, Danse Macabre), and gross-outs. Most may not be the best King shorts, nor the most chilling, but they are memorable for the far-outness of their concepts, and the sheer amount of adaptations they produced. 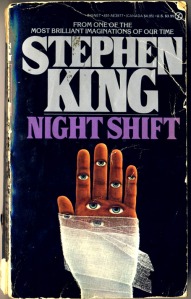 “Jerusalem’s Lot” and “One for the Road” serve as a sort of prologue and epilogue to the novel, ‘Salem’s Lot. “Children of the Corn,” about a couple who stumble into a creepy religious town where there are no adults, was made into more sequels than it deserved. “Trucks” became King’s directorial debut, Maximum Overdrive, with Emilio Estevez and an AC/DC soundtrack King probably listened to while he wrote the script. My favorite of the bunch when I was a kid, “Battleground” (which I copied from memory for a school assignment on my dad’s Tandy laptop), was adapted well in the Nightmares & Dreamscapes miniseries, with John Hurt as the hitman besieged by the toymaker’s box of animated soldiers.

In a recent reread, I found two decidedly non-horror stories work very well for their surprising level of emotion and honesty. “The Last Rung on the Ladder” is a haunting story about siblings, trust, and suicide. “The Woman in the Room,” the first short film by Frank Darabont (The Shawshank Redemption, The Walking Dead), is a sad tale of a man’s inner demons and remorse as he prepares to pull the plug on his dying mother. I have a feeling King, whose mother had recently passed, wrote the story to purge his own demons, and those feelings shine through (darkly) on the page.

The book also stands out in my mind for two quotes about writing that have stuck with me, one from John D. MacDonald, and the other from King himself. In the Introduction, MacDonald wrote that when he met people at parties, someone would always said, “You know, I’ve always wanted to write,” to which he began gleefully replying, “You know, I’ve always wanted to be a brain surgeon.” In the Foreword, Stephen King answers a question in a similar fashion: when asked “Why do you choose to write about such gruesome subjects?” King responds, “Why do you think I have a choice?”

I think he was on to something.

“I have seen the future of horror… and his name is Clive Barker.” This quote by Stephen King was splashed across the covers of Clive Barker’s Books of Blood omnibuses that I happened across at my local library. (For a small town, the Millbrook Public Library seemed to have just about everything a young horror fan required to keep himself sane.) Barker’s short stories are still some of the most visceral and imaginative I’ve ever read. His prose is often spare, but always vivid. It was Barker’s work that inspired me to try my hand at writing fiction outside of school assignments. My first few short stories as a teen were very Barker-esque, featuring sado-masochism and love-starved demons. 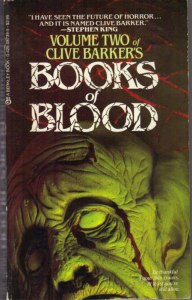 The omnibuses open with the eponymous frame story, in which we learn the Books have been carved into the flesh of a phony psychic by the ghosts of a haunted house. From there we take a ride on “The Midnight Meat Train,” following serial killer Mahogany into the depths of depravity. “In the Hills, the Cities” contains some incredible imagery and heavy metaphor, and introduced me to openly gay protagonists, which is significant mostly because I almost chose Barker’s 1996 novel, Sacrament, as my favorite, a book often criticized by cretins for a handful of explicit gay sex scenes.

There are other stories that return to my imagination like the animated dead from time to time: “The Body Politic,” in which our hands revolt, lopping each other from the oppressive shackles of our bodies and skittering off to conquer the world. In “Down, Satan!” a man seeks the attention of God by building a Hell on Earth. “The Age of Desire” is a chemical aphrodisiac experiment gone wrong. “The Forbidden,” a story about the power of legends, became the basis for one of my favorite horror movies, Candyman. It was Barker’s collection, filled with gruesome imagery, insane twists, poetic style, and in-your-face sex and violence, that made me decide to publish a short story collection of my own.

Stephen King once wrote that short stories are becoming a dying art. Everybody wants longer novels, series, sequels. I believe there will always be a place for them. Anthologies are becoming increasingly popular, particularly in the horror genre. Short stories have the benefit of being read in one sitting. For a writer, there is no better spark for the imagination. Both Barker’s and King’s short stories have been and continue to be a huge inspiration for me and my writing. 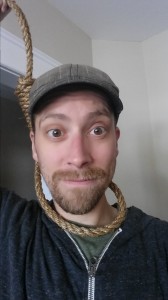 I want to thank Duncan Ralston for taking the time and telling us a bit about his two favorite books and how they’ve inspired him in his our disturbed quests. Duncan Ralston is the author of Gristle & Bone, a collection of fantastic and terrifying short stories. His debut novel, SALVAGE, will hit eBooks and paperback shelves this summer. You can find and keep up with Duncan via his website The Fold and/or you can follow him on Twitter and/or Facebook.