Posts tagged “Night of the Comet” 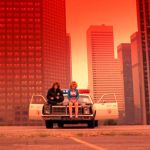 The film is basically a 50s/60s B-Movie, made in the eighties. It has a cheesy voice-over at the beginning which would not be out of place in Invasion of the Bodysnatchers or War of the Worlds. The setup is remarkably similar to Day of the Triffids. A once in a lifetime meteor shower promises an amazing light display, so the entire world and their dog hold street parties to have a few beers and take in the sights. Unfortunately, thanks to the heavy handed introduction, we learn that this very comet also made an appearance just as the dinosaurs disappeared.  END_OF_DOCUMENT_TOKEN_TO_BE_REPLACED