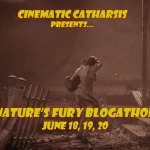 Narrator: For centuries, the prayers of Mexico’s peasants have been their only shield against the devastating furies that have wrecked their homes and destroyed their lives. And so today, again they kneel, terrified and helpless, as a new volcano is created by the mysterious and rebellious forces of nature. The Earth has split a thousand times. Whole acres of rich farmlands have cracked and dropped from sight. And millions of tons of molten lava are roaring down the slopes, in a quake recorded on the seismograph of the University of Mexico as the most violent of modern times. To the benighted citizenry of this remote countryside, the most alarming aspect of the phenomenon is the fact that its unabated hourly growth is without precedence, having reached a towering height of nine thousand feet within a few days. And with each added foot, it spreads its evil onslaught into a wider circumference. But what is now most feared is that rescue work will be severely hampered by the hazardous inaccessibility of the terrain.

As we enter into The Black Scorpion, we’re greeted with the above narration, giving no clues to the future horror in which we will soon behold. The premise is basic, and strangely different from a majority of sci-fi movies during this very Cold era. A volcano erupts in a little hamlet near Mexico City and the local villagers and animals, mostly cattle, are vanishing. The corpses that have been found are inflected with a strange wound and a puzzling poison, biological, natural, and otherworldly, found within their bloodstream.

As the story progresses, American geologist Hank Scott, played by well-known sci-fi actor Richard Denning (who looks a hell-of-a-lot like Kenneth Tobey from The Thing from Another World), and his local partner Dr. Artur Ramos (Carlos Rivas), travel to the sight of the temperamental volcano to conduct research and investigate why the sleeping giant has decided to wake. Their investigations lead them into an odd series of findings that eventually reveal the true source of the disappearances of locals and cattle. On their initial venture, they stumble upon a small pueblo that has been completely decimated. They find only one survivor, an infant. The only other person the duo happen upon is the missing constable, eyes frozen in terror and an eerie puncture wound on the back of his neck.

Team Hank then travel to San Lorenzo, which seems nearly overrun with panicked villagers who believe the disappearances and the destruction of their homes are the cause of a demon bull. Hank and Artur seem un-phased by the frenzy or by Major Cosio’s pleading for them to remain in San Lorenzo, not for the safety of the scientists, but so that if something were to happen to them, the Mexican army would not be forced to waste their time in a rescue mission instead of working where they are needed more, with the scared and frightened villagers. Hank simply laughs and continues on with his expedition, which to me seemed odd. They haven’t specified if he was there to investigate the vanishing people and cattle, only that they were there to survey and study the volcano.

Well, this wouldn’t be a quasi-American 1950s sci-fi movie without at least one damsel in distress. For this role were are given the lovely Sunset Boulevard showgirl, Playboy Playmate (1958) Mara Corday who plays cattle ranch owner Teresa Alvarez. No stranger to cult sci-fi movies, Mara has been in a few well known classics, including Tarantula, The Giant Claw, and a number of spaghetti westerns, such as, A Day of Fury and The Man from Bitter Ridge, to name a few. Teresa is thrown from her white horse and as one might expect, Hank comes to her rescue. The two seem to fall in love at first sight (barf) and are invited back to her ranch for…well, more than tea I imagine. Before venturing off, Dr. Artur discovers a strange volcanic rock and takes it back with them to the ranch.

At this point, if you’re watching the film, you might be wondering, where are the giant bugs? And I would agree with you because this is what I was gripping about when I screened the movie late last night. Everything thus far has been “setup, setup, setup,” with little to no release. We’re given a little tease at the beginning, an eerie ringing off screen, but nothing satiable. Don’t worry. The movie is about to pick up the pace.

At the ranch, while Hank and Teresa nauseously flirt, Dr. Artur, after splitting open the rock, discovers what he originally thought to be a fossilized scorpion, is actually alive and scurrying about on the pool table. Here we can almost feel the mood of the film change, slightly. How can a scorpion survive being encapsulated in a rock inside a volcano? It doesn’t make sense. It breaks the laws of nature as we know it. Soon after, Teresa makes contact with her phone repair men who are suddenly attacked by the true villains of all these bizarre disappearances of people and cattle. Giant black scorpions strike and kill the repair men. Special effects guru Willis O’Brien, who created the stop-motion effects for the original King Kong, gave his talents to the creature of these creatures. And let me say, here and now, without his work, this movie would have absolutely flopped.

Well, for many reasons actually. The script was the oddest mod podge of traditional ‘50s sci-fi (think Atomic-age, mad science), western, horror, and a mix (rip off) of Them! and The Creature from the Black Lagoon.  Most of the acting was great, but there were cringe worthy moments when you’re going, “Did they really just say that?” Case in point, when Hank and Artur are with a local laboratory scientist, Dr. Velazco, the very “mad” looking fellow asks his assistant for alcohol, distilled water, salt solution, and tequila before conducting his experiment on the poison he found in the blood system of one of the found victims of the scorpions. Hank asks, “Well, the alcohol, the distilled water, the salt solution – I can understand that, but what’s the tequila for?” And, right on cue, the good doctor says, “Well, in your country I believe they call it a coffee break” (enter drum roll here). 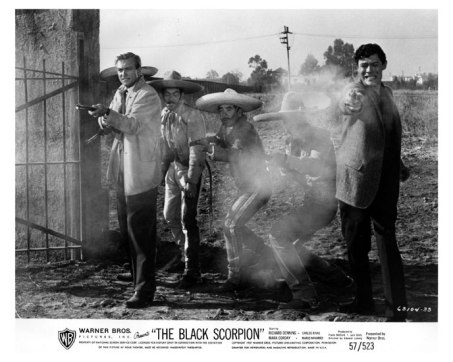 The mood of the movie is hard to place. Something strange is going on in the story. People are being horrifyingly eaten alive by giant freaking scorpions. Whole towns are vanishing. Cattle are being devoured. And when you see the scorpions on screen, it is insanely terrifying. O’Brien really did a phenomenal job. Stop-motion has a certain qualia about it that get under my skin, especially when used with horror. But the cast seem nonchalant about it all. Hank and Artur venture into the subterranean realm of these beasts, discovering a variety of forgotten species, a very Jules Verne Journey to the Center of the Earth type place, made up mostly of only insects, making it even creepier. But still, these scientists don’t seem all that scared. They’re cool. Too cool.

The ending was even more scandalous. After discovering that the all the creatures were not destroyed with the cave-in, they watch as the “granddaddy” scorpion straight up murders the smaller scorpions, making him king scorpion, as if he wasn’t already. The witty humans lure the uber-giant scorpion into an arena, away from civilians. While the Mexican army batters the beast with tanks and gunfire, Hank manages to finish it off by using an electric cable attached to a spear, of which he somehow was able to thrust into the scorpion’s throat, it’s only vulnerable spot. Finally, electrocuted, the monster is slain. 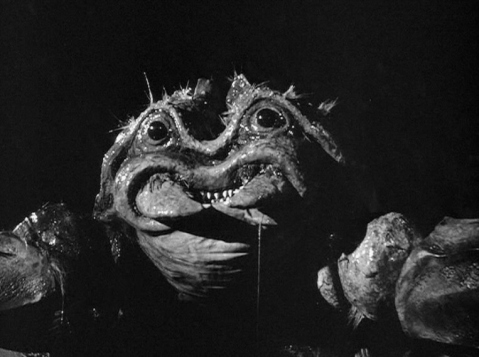 As the scorpion lays there, smoldering, Hank begins to walk away. Artur and Velasco beacons him to stop so that they can conduct research on the creature. And, I shit you not, in more or less words, Hank takes the voluptuous Teresa across her hips and smiles, “I’ve got my own research to do,” or something like that, and the two rush away for what we assume to be…well…you know, while the remaining cast and crew grin in that stupid way people did back in the day when something funny was said.

Okay, my tone is probably giving away more of my feeling of the film then needs warranting. And yes, mentioning again the fantastic work of special effects master Willis O’Brien, and how the scorpions on screen really were disturbing, especially that scene with the phone repair men, truly horrifying. The rest of the movie though seemed short on talent. I’m not saying it was the fault of the actors, most were really good, despite laughing to myself as it seems a habit of Hollywood to cast Anglo-American in roles that ought to belong to someone else. Also, the use of the ringing effect with the scorpions was (lets no dance around it) a total rip off of Them! Not to mention the whole idea of a prehistoric species surviving and returning to present day is very reminiscent of The Gillman movies.

The upside to all these failings eventually lead the movie to being featured on Mystery Science Theater 3000 back in the early 1990s. So…there’s that. Overall, The Black Scorpion is mildly entertaining. Not the best of what the ‘50s had to offer in sci-fi; not the worst either.

Thomas S. Flowers is the published author of several character driven stories of dark fiction. He resides in Houston, Texas, with his wife and daughter. He is published with The Sinister Horror Company’s horror anthology The Black Room Manuscripts. His debut novel, Reinheit, is published with Shadow Work Publishing, along with The Incredible Zilch Von Whitstein. His new series, The Subdue Series, both Dwelling and Emerging, are published with Limitless Publishing, LLC. In 2008, he was honorably discharged from the U.S. Army where he served for seven years, with three tours serving in Operation Iraqi Freedom. In 2014, Thomas graduated from University of Houston Clear Lake with a BA in History. He blogs at machinemean[dot]org, where he does author interviews and reviews on a wide range of strange yet oddly related topics.