Book Review: “I’ve Got The Light of Freedom: the organizing tradition and the Mississippi Freedom Struggle.” 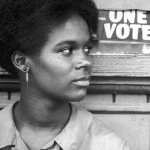 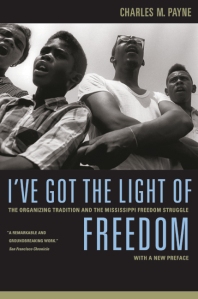 One of the greatest pursuits in social history is understanding the peoples narrative. Social history looks at the collective memory of ordinary people and their contributions while living “everyday lives.” Social history is precarious to be sure. The evidence is collective in buck shot and is tedious. There is too little scholarly research done in understanding ordinary people and their history from the bottom up. Mainstream historians focus on prominent persons; singular people or in small groups made famous or infamous by some popular or well-known event. Consider the Civil Rights Movement and how schools are teaching kids about famous leaders within the movement or famous people from the movement who may have not been leaders per say, such as: MLK, Rosa Parks, Malcolm X…and…and that other guy! There is another popular misconception that the Civil Rights Movement was lead by the southern Christian church. Rev. Aaron Johnson, a WWII vet, in 1962 was among the first of a few churches (First Christian Church) in Greenwood, Mississippi who actually showed interest in the voter registration and citizenship movement. Rev. Johnson has often pointed out in interviews that people give too much credit to churches during the Civil Rights Movement than was actuality; people saw leaders who were ministers and assumed churches were at the root. During the Birmingham, Alabama campaign, no more than 10% of the churches were involved. Although difficult, and especially time consuming when collecting evidence and testimony, social history, history from the bottom up, is an important perspective when looking at historical events, such as: the Civil Rights Movement, and in elevating truth over popular misconception and assumption.

Historian and sociologist Charles Payne, in his work, “I’ve got the light of freedom: the organizing tradition and the Mississippi freedom struggle,” has accumulated countless first person testimonies of ordinary people who lived and breathed the Black Freedom movement in the southern delta and the particular history from which the Freedom struggle grew out of. Charles Payne reconstructs historical truth and gives a more accurate depiction of the Civil Rights Movement as it was for regular everyday people living in the rural south. The working class become illuminated as the leadership responsible for giving the movement vitality. Payne steers away from popular mythology regarding popular figureheads of the movement and instead focuses on the organizing process in Mississippi spanning thirty years or more, from the 1940’s through the 60’s.

Honestly, this is one of my favorite books for the Civil Rights Movement. Don’t get me wrong, charismatic leaders are an important qualia for any movement, be it for equality, labor, or otherwise; however, the life and blood of movement are in the ordinary people (the you and I’s of the world) who in the course of their everyday lives play a critical role in moving a movement. And Payne tells the story as a true social historian, from the lives of regular people. My favorite family from his book was the McGhee’s. Laura McGhee (or mama) seem to have had a reputation for personal fearlessness, demonstrated in her first attempted to register to vote in 1962 before the big groups and big support from organizations like CORE and SNCC. Mama also encouraged her friends and neighbors to follow suit. She own her own farm outside of Greenwood, Miss. where she taught citizenship classes, and hosted meetings and rallies. Mama also encouraged and supported her three sons, who were all active during the 1964 Freedom Summer Project era. Silas McGhee, her youngest thought the 1964 Civil Rights Bill was a sham because it only offered rights he thought were already legislated in the Constitution and Bill of Rights. Silas tested the new bill to see if anything actually changed because of it. In July 1964, Silas walked into the Leflore Theater (whites only) and sat down to “watch a movie.” He was asked to leave by the management. The following day, Jake McGhee went to the same theater, but had to fight his way out of an angry crowd after being asked to leave. A few days later, both Jake and Silas returned to the same theater and when asked to leave they scarcely made it out of a mob that had formed outside. In August 1964, after shuttling SNCC workers all day, Silas was shot in the head while waiting out a storm in his car. He survived and in the span between June and December 1964, Silas and Jake were arrested seven times between them. The courage of the McGhee’s inspired those around them to take more direct action in testing the limits of legislation and in traditional mainstream history, their story would simply be a footnote, easily and sadly overlooked.

If you are interested in digging deeper into the Civil Rights Movement and reform, check out Dr. Payne’s book, “I’ve got the light of freedom.” You will not be disappointed.

Charles Payne, “I’ve got the light of freedom,” five out of five stars!!!