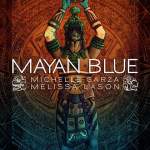 Xibalba, home of torture and sacrifice, is the kingdom of the lord of death. He stalked the night in the guise of a putrefied corpse, with the head of an owl and adorned with a necklace of disembodied eyes that hung from nerve cords. He commanded legions of shapeshifting creatures, spectral shamans, and corpses hungry for the flesh of the living. The Mayans feared him and his realm of horror. He sat atop his pyramid temple surrounded by his demon kings and demanded sacrifices of blood and beating hearts as a tribute to him and his ghostly world. These legends, along with those that lived in fear of them, have been dead and gone for centuries. Yet now, a doorway has been opened in Georgia. A group of college students seek their missing professor, a man who has secretly uncovered the answer to one of history’s greatest mysteries. However, what they find is more than the evidence of a hidden civilization. It’s also a gateway to a world of living nightmares.

Mayan Blue according to reviewers:

“Mayan Blue is my first exposure the authors, who seem to have built up their reputation far prior to my reading of this. Frankly, I’m kicking myself in the butt for it. I’m not sure if anyone has seen the Fred Olen Ray film SCALPS, but if that film had been made with some artistic ability, 20 times the budget and production value…I am pretty sure we would have Mayan Blue. This is a very, very good thing. I love the hell out of this book, and if you’re a fan of the gorier, faster-paced stuff, I’m pretty sure you will too. Subtle and gentle horror? It’s not for you. For me, MAYAN BLUE has me anxiously awaiting the sister’s next book!” -Brandon St. Pierre

“I thoroughly enjoyed Mayan Blue, the debut novel from sisters Michelle Garza and Melissa Lason. This fast-paced, action-packed thrill ride is guaranteed to entertain and scare readers. The characters are well-developed and relatable, especially Wes. His desire to protect Alissa is heartfelt and compelling. I loved the detail and effort put into creating the mythos and creatures. The gory details are what make horror lovers like me smile. I can’t wait for their next release” -Amazon Reviewer.

“Let me start off by saying, this book is bonkers. And I mean that in the best possible way. Quick synopsis: A small group of students search for their missing professor, who has opened a portal to the Mayan Underworld somewhere in Georgia. Mayan Blue is a lot of things. It’s horror, dark fantasy, and adventure all rolled into one kick-ass, balls-to-the-wall action story. It’s like if Tomb Raider and The Ruins got frisky with Nightbreed and the three of them had a baby. If there’s one thing you need to know going in, note that it’s a bloodbath. You’d think the Sisters of Slaughter would be a dead giveaway, but just when you think there can’t possibly be more blood to spill, these authors find away to cut and slice, rip and mutilate. While the story borrows some cheesy 80’s slasher cliches (which I love), the book manages to stay fresh and imaginative, and that’s due to the writers’ keen eye for world-building. I loved the way they painted the Mayan underworld, Xibalba, with such detail. Rich descriptive narratives and beautiful dark prose elevate what could have been a very routine, gore-reliant killfest into one of the most impressive debut novels I’ve read in quite some time. Debut novels often sport flaws, and while Mayan Blue isn’t perfect, it’s a damn fine story with great pacing, perfect for killing off an afternoon or two. I enjoyed Mayan Blue and recommend it to anyone who’s a fan of old-school Brian Keene novels, horror that goes for the throat instead of chills. There’s not many lulls between the action. Bloody entertaining. I can’t wait to see what the Sisters of Slaughter come up with next. So, in all – READ THIS BOOK. Just remember to bring a barf bag. You might need it. This book is metal” -Tim Meyer.

You can purchase your copy of Mayan Blue for the low price of $2.99.

Michelle is from Arizona. She writes alongside her twin sister, Melissa Lason. They have been dubbed The Sisters of Slaughter. They write horror, science fiction and dark fantasy. Their work has been featured in FRESH MEAT by Sinister Grin Press, WISHFUL THINKING by fireside press, WIDOWMAKERS a benefit anthology of dark fiction and Michelle had a poem included in the POETRY SHOWCASE VOLUME ONE put out by the HWA. They have stories soon to be released in anthologies by JEA, including REJECTED FOR CONTENT 3, FATA ARCANA and MALES VS FEMALES.