If you’re subscribed to my newsletter or have been following my feed on Facebook, then you’ve probably already heard the news. The next installment in my growing Subdue Books Series will release next week with Limitless Publishing LLC. This new title is called Conceiving, and in this post, I’d like to tell you a little bit about the new story. Before that, though, maybe I should recap what happened in the previous books…without giving away any spoilers for anyone who has not read either Dwelling (Subdue Book 1) or Emerging (Subdue Book 2).  What I’ll be giving then is general information while avoiding major twists and such. And let it be made know, to follow along in Conceiving, you do not have to have read the other books. Okay…let’s begin.

A long time ago in a galaxy far far away….

At the beginning of Dwelling, we are introduced to Johnathan and Ricky who are both in the U.S. Army serving in Iraq during the 2006-ish years, basically Operation Iraqi Freedom era. While on guard, Johnathan thinks he sees something…unnatural during a sandstorm. The event is juxtaposed with an actual attack on the Iraqi Police station they were guarding. Johnathan and Ricky’s trunk is hit with an RPG. And…no spoilers here as it is made very abundant in the beginning, Ricky is killed instantly, while Johnathan suffers the loss of a limb. This is how Dwelling opens. From here, we fast forward one year from the attack that claimed Ricky Smith and we are introduced to some other major characters.

Bobby Weeks (one of my favorite characters), who also served in the U.S. Army during the Iraq War, is now a homeless veteran. He wanders the streets out of necessity, or so he imagines. Bobby believes, due to a particular curse, he has to keep away from those he loves, his family and his friends. He doesn’t want to hurt anyone. Bobby has a secret, a curse he contracted in Kurdistan when the moon is full he blacks out and wakes the next morning either naked or nearly, and covered in blood and grime. A strange woman finds him in a field and tells Bobby what he is and offers him a place of safety, to keep the beast within him away from the public at large.

Jake Williams is another character we meet. He is a Presbyterian minister with a dark conscience. Like Johnathan, Ricky, and Bobby, Jake also served in the U.S. Army, but not as a combatant. Due to his strict religious observance, Jake was a chaplain’s assistant. Something happened over there, something Jake had witnessed, something strong enough to weigh heavy on his guilt, powerful enough to fracture his faith in God. In the book, Jake struggles with his faith as he fills his religious void with sex. Eventually, his guilt manifests in haunting ways and a soldier he believed dead returned.

Maggie Smith is our last of the group of childhood friends known as Suicide Squad (I know, the name was picked before the movie made the comic popular again!). Maggie is the widow of Ricky Smith and we get to know her one year following the death of her husband. She’s still on base housing but will be forced to relocate. During her house hunt, she is reminded of one of the summers her childhood friends (Johnathan, Bobby, Jake, and Ricky) had come across an odd old farm house in Jotham, TX. Said house, she discovers, is for sale. Maggie quickly buys the house and moves in almost immediately. This wouldn’t be much of a thriller book if the house was normal, would it? And as such, the House on Oak Lee is anything but normal. She begins to hear things at night, crawling, scratching behind the walls. Then she begins hearing sounds, like footsteps, coming down the hall. Haunting or hallucinations, we do not know, but they are escalating. Fearing she is losing her mind, Maggie writes to her childhood friends, hoping to bring them back together, to visit her at the House on Oak Lee.

The House could certainly be another character. It has a strange history, which is revealed through the chapters with Augustus Westfield. If you enjoy historical fiction, I’ve been told these chapters were the favorite for some. But, most of what happens in the House happens in the next book, Emerging. Since Dwelling and Emerging are so closely related, there is no need for new character introductions. Emerging picks up where Dwelling left off. The once childhood friends, Johnathan (and his wife and step-daughter), Jake, and Bobby reunite in Jotham, Texas at Maggie’s house. Adding to Jake’s fear, Maggie looks…different, strained almost…sickly. Johnathan is struggling to keep his marriage together. Seeing one’s dead best friend talk to you in a public restroom can change a man. 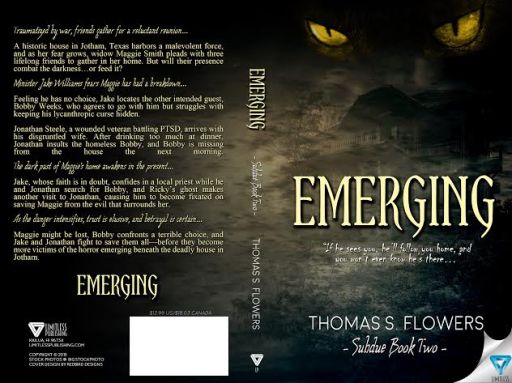 Bobby agrees to go, but only if Jake promises to take him back to Houston before the next night. There’s a full moon coming and Bobby has no intention of putting his friends in danger. However, none of the others know about Bobby’s curse, and thus, especially with Johnathan, treat him as an eccentric selfish recluse. It has been years since the childhood friends were together. And things don’t smooth over that first night. The next morning, Bobby goes missing. The gang attempts to find him in town.

Unable to locate Bobby, and after being visited again by Ricky’s rotting specter, Johnathan and Jake become desperate to get Maggie out of the house. They don’t really know what’s really going on or what the house really is. All they know is that their friend is in danger. Her body seems to be wasting away before their very eyes. As the danger intensifies, trust is elusive, and betrayal is certain…

So…that’s a pretty good sum up of both Dwelling and Emerging.

Now for the “good stuff.”

Conceiving…if you’ve read the ending to Emerging…you may be wondering “how the hell do you go from there?” While keeping to my nihilistic style, Emerging still had some very finite conclusions. Things happened that you cannot write around or walk away from. However, that being said, I felt that there was still more to be told. Me? I’m a fan of developing characters. Sometimes they start out as minor and vaguely important. And sometimes they can grow and become much more influential to the story. Luna Blanche is one of those characters. She was in Dwelling and Emerging, but only in a minor role, attached to Bobby’s arch.  In Conceiving, her role is much bigger. Though separated from Bobby, she can still “see” him telepathically due to her unique gifts. But the Mississippi Delta woods are limiting her visions, isolating her even farther from what she loves. Her garden. Her grandfather’s house in Hitchcock. And Bobby. 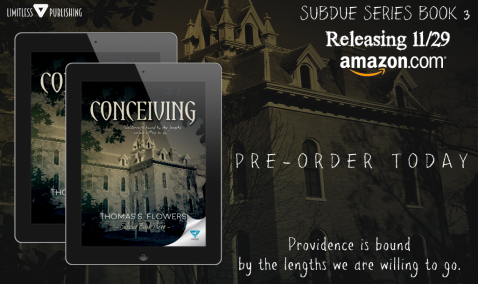 The cabin in the Mississippi woods is quiet. There are no other family members to help Luna take care of her ailing grandmother. No friends. Nothing but the sound of the trees swaying in the wind and a dark presence she can feel hiding in the woods. To add to the strangeness, her grandmother seems disconcerted by her prognosis and instead seems both urgent and hesitate to share with her some sort of secret, some family sin Luna will eventually inherit. If you recognize the name Blanche, especially the name Ronna Blanche, your suspicions are true. Ronna Blanche, now Memaw, is a holdover character from another story of mine called Lanmo. Lanmo was based in the 1960s when Ronna was a young voodoo priestess. Now she is aged and sick. And feels compelled to warn Luna, that she must get her granddaughter to understand why she did the things she did before she dies because her sin, the family sin, has not gone away but remains, hiding in the woods. I don’t really want to spoil anything here, but if you have read Lanmo, you can pretty much guess what that “sin” is.

The only major holdover from Dwelling and Emerging is Bobby Weeks. I don’t want to say too much about Bobby, as it may inadvertently give away something from the previous book. However, I will say that Bobby is attempting to move on with his life. He gets a job. Makes a real go at being normal, despite his curse. Poor Bobbs. Nothing ever seems to pan out for the guy. Eventually, he will spiral and be consumed with revenge, set on a trajectory back to Jotham. 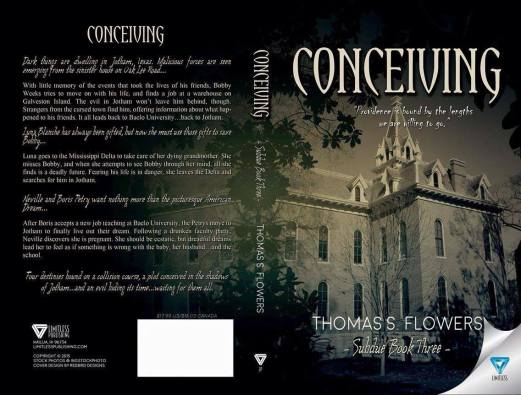 There are a lot of new characters, but the most important ones are Boris and Neville Petry. And yes, Neville is a girl. And I love these two people. I know I wrote them, but that doesn’t make them mandatory to love. And yet, I do. They represent, for me, a young American couple seeking a piece of the American Dream. Boris is a history professor who is offered a job teaching at Baelo University, an obscure little school on the outskirts of Jotham, Texas. Neville, while reluctant to leave behind their life at Ole Miss, agrees, hoping in part that the change will maybe help cultivate the family, the child, she so desperately desires. Weeks following a faculty party, it seems her wish has come true. But dark nightmares plague the happy pregnancy…as does her husband’s strangely distant behavior towards her.

I could say more…but why spoil the fun!

And there you have it, folks. The low and dirty of Conceiving. Plenty of dark twists and history and story to unraveled. And again, you do not need to have read Dwelling and/or Emerging to follow the plot in Conceiving. It certainly helps, especially in understanding Bobby, but the guilt he carries is made pretty clear within the pages of this new story. I am really excited about this one. When I wrote it and turned it into my publisher, I immediately started working on Book 4…which is finished and contracted with Limitless. News on that one to follow soon. In the meantime, I hope you enjoy this new book. Lots of horror to devour. Voodoo priestess. Werewolves. Cults. Extra-dimensional insectoid creatures. Strange pregnancy. And my own personally take on the Frankenstein monster. Plus all the human drama and humor we love to feed on.

Conceiving is now available for preorder. Due to release on November 29, 2016.  You can get your copy here. Or if you fancy getting a paperback, you can order that here. And if you are curious about my other books, you can find them on Amazon by following this link here. And as always, you can connect with me on Facebook here, where I post new book info and other horror related topics. Thanks for reading everyone!