Vaudeville comedy has a certain kind of charm. An allure that brings in audiences for a quick laugh. An appeal developed by legendary talents, such as The Three Stooges, Buster Keaton, Charlie Chaplin, and Harold Lloyd, to name a few of the pillars that made up the vaudeville slap-stick house. For Abbot & Costello, their era of fame started in 1940, with One Night in the Tropics, and ended with Dance with Me, Henry, in 1956. Lou Costello, the bumbling “dim-wit” of the duo, would eventually pass away in 1959, leaving Bud Abbot, the “straight man” of the pair, searching for a new partner in Candy Candido, but eventually calling it quits because, “No one could ever live up to Lou.” Bud passed away in 1974. For me, I think the 1940s is really when the duo shinned the brightest. It was an era of heighten stress due to the war in the Pacific and in Europe.  War time audiences were looking for distractions from the woes of loved ones deployed and of uncertain outcomes in the development of world powers. Our featured film for this review is Lou and Buds second to last Universal Monster flick, released in 1951, and you can begin to see the struggle of defining their roles in a new era. The movie itself plays out as part mad science, part detective/noir, part boxing, and part loony tunes. As our honor guest reviewer has pointed out in his review below, there moments of genuine entertainment, but for the most part, the film was dragged out and ultimately boring.  Well, I shall not delay any longer, lets see what our guest writer has to say.

I have to admit, the Abbot and Costello films were never something I went out of my way to watch or indeed find copies of in recent years. They linger in my memory, part of my childhood, part of growing up and watching whatever the grown-ups were watching. In our house, it was either Westerns or War films, both which I hated until I discovered Clint Eastwood.  Black and white films were to be snubbed as old and boring. It wasn’t until I discovered the genius of the Marx Brothers that I gave black and white a chance. I think it was my Granny’s fault. She used to eat them up. I remember her doing the ironing in the living room with the television blaring on a wet Saturday afternoon. I would be on the sofa reading a Beano or playing with Star Wars figure and these great brays of laughter would echo around the room. It was the television. Something on there had got her going. I was intrigued.

The Marx brothers made me laugh out loud and although it wasn’t until my teens that I appreciated the genius timing of Groucho’s gags and the on-screen chemistry between the brothers,  I still needed to see everything they had done. Thankfully my uncle had just purchased a VHS video recorder and would rent various video tapes at the weekend. One of those tapes was ‘Abbot and Costello Meet Frankenstein’. I can remember enjoying it without knowing what I know now and how it featured some of the greatest names in cinematic history. Looking back, I really enjoyed watching it but don’t ask me to tell you the plot. Kids don’t do plot. They do slapstick and action and Bud Abbot and Lou Costello did it perfectly.

Having been asked to write a review of a film I was given a list of possibles. I chose ‘Abbot and Costello Meet the Invisible Man’ for one reason and one reason only. I had never seen the film. I had heard of it but I had never actually watched the thing. Also, I’ve never reviewed a damn thing in my life apart from a few lines here and there on Amazon about books I’ve read so bare with me.

The title itself suggests horror but we know it’s not going to be an all-out horror flick is it? No, of course not and to be honest there isn’t any horror in the film whatsoever. It’s a comedy, it’s a vehicle for Lou Costello and Bud Abbot to showcase their vaudeville skills and put them on the big screen and they do it perfectly. Don’t they always?

Since agreeing to review this, I’ve sat down with the laptop, loaded up the film and ate some crisps and drank some soft drinks, clear head required and I must say each time I’ve watched the movie it has been as enjoyable as the first. Even that Universal music during the opening credits gets me going. Big old Earth spinning around is a definite cue to go grab some nibbles because you know you’re in for a treat, you’re in for a quality hour and a half’s entertainment. They just do it right.

So here we go, Lou Costello, or Lou Francis as he is called in the movie, is skipping, tripping and dancing up to graduate from Detective School, misses the chair and falls on his arse. The start of it. Lou is informed by his partner, the very brilliant straight guy of the duo, Bud Abbot, that he slipped them twenty bucks to let him graduate. I think this is the first time of many that Lou looks directly at the camera. I have my doubts about that though. It’s a fun thing to do in a film and an fourth wall effect I love but I sometimes wonder if Lou actually relies on prompts from off-screen. I guess we’ll never really know.

Anyway, the unlikely detective duo are in their office when the boxer, Tommy Nelson walks in, all cagey like and makes a phone call. It’s Lou that recognizes who he is. Bud is still in the dark. That old straight guy/fun guy thing really working full speed.

Tommy needs to go to the Doc’s place and ends up getting injected with invisibility serum. He needs the comedy duo to help find out who murdered his manager, a murder in which he has been convicted of. They agree and drive him to meet Dr. Phillip Gray, the posh doc played brilliantly by Gavin Muir. His accent is just sublime. I just wish he was in the film more.

The Doc refuses, the cops arrive, and Tommy takes the serum on his own. It doesn’t work straight away but it eventually does when he is alone with Lou and the handshake scene is priceless. It’s the first glimpse of how the invisibility effects are going to pan out. They work, there is no denying that. I don’t think there is one moment throughout the film that features the invisible man that you think, yeah, I know how they did that or I can see the strings. It doesn’t happen. I won’t list them here but each invisible man sequence is perfectly done and when you watch it you will agree. Be it spaghetti or playing cards. 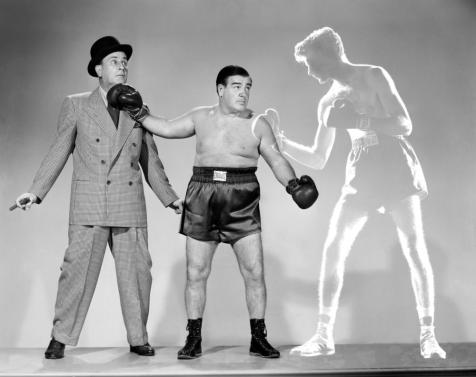 A character that has to be mentioned is the detective played by William Frawley. His lines are sharp, delivered well and his frustration with Lou is just class. He sends him to a psychiatrist and Lou ends up hypnotizing everyone he comes across in a scene which includes a reference to a nursery rhyme about mice running up a clock. Again, I don’t want to give much away but it’s funny as hell.

This is where the film falls into two segments, the build-up to the big fight and the fight itself. We find Lou and Bud in a fancy restaurant with Tommy (invisible) at the table. They order food and the food scenes are the funniest and best scenes in the whole film.  It is also the first time we see that Tommy might be starting to lose his mind a little. He gets this huge ego thing going and Lou and Bud try to keep him cool. It doesn’t work and all hell breaks loose in the restaurant, resulting in Tommy getting knocked out by some revolving doors. They get him back to the Doctors. Tommy is full of remorse, well acted by Arthur Franz who is a constant star throughout the film. A straight talking guy that compliments Lou and Buds slapstick brilliance.

Here we go then, fight night. You know what’s going to happen. Fight scenes will ensue, Lou Costello will camp it up and bounce about the ring like a fool but it will entertain you, it will make you smirk, maybe not laugh, but smirk and the bad guys will get their just reward. I can’t be bothered detailing all the scenes and quotes that matter, there’s no point. If you want to watch it then do so. I recommend that you do.

I’d like to say one final thing about this film, Abbot and Costello Meet The Invisible Man, this is not a horror movie, it’s not even a comedy. It does entertain, it has those old moments, those, ‘Why, I outta…’ moments, but that’s standard with an Abbot and Costello film. You know what to expect. Did I enjoy it? Yeah, of course, I did but I’m not going out of my way to talk it up like a lot of folks do. It is what it is. I’m a fan but if I had the choice of spending my Saturday afternoons watching this or a Marx brothers film, I would go all out Groucho. That’s just me. I like horror and this isn’t. I like comedy and this is dated. Worth a watch on a rainy Saturday afternoon if you have nothing else to be doing but  don’t go out of your way to check it out. It is what it is. Too much film on a really slim plot. 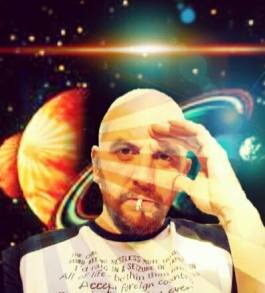 Lewis Duncan is an up and coming writer and graphic artist. You can find his work on numerous book covers recently released this year, including books by Dawn Cano, Duncan Ralston, and myself (Thomas S. Flowers). He also has upcoming projects with the likes of Kit Power and Rich Hawkins. Some of Lewis’s publishing work includes Violent Delights, in which he co-wrote with Dawn Cano. He is an avid reader and supporter of fellow indie writers. His artwork is stylized in a retro, space-age grunge, 70s grindhouse. You can follow Lewis on Facebook to keep up with all his latest work.