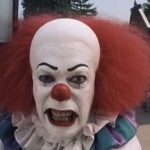 Chad’s take on It.

In 1990, the world of Stephen King expanded even more as ABC aired a miniseries adaptation of his legendary book, IT. The movie would span across two parts and feature a large ensemble cast, the same group of characters, both as children and as adults. The success or failure of the film aside, Tim Curry’s performance as Pennywise has gone down as one of the more brilliant portrayals of a Stephen King character, alongside Jack Nicholson as Jack Torrence and Kathy Bates as Annie Wilkes.

We find ourselves now in the year 2017, on the brink of a new film adaptation, this time set for a theatrical release as opposed to television. And while the original miniseries continues to have legs in terms of the fans, as the years go on, it seems to take more of a turn towards being mocked and criticized as a joke and a failure, a betrayal of source material which I concede is likely King’s greatest book.  END_OF_DOCUMENT_TOKEN_TO_BE_REPLACED