Let me start by saying  that I am a fan of the Invisible Man. The original book by H.G. Wells is a work of utter brilliance, and the original 1933 film, The Invisible Man, starring Claude Rains, is a wonderful screen adaptation and true to the “mad scientist” theme. Its a difficult story to pull off in a movie. The effects have to be decent and the actors have to be good enough for everything not to come off feeling comical. The original with Claude Rains as the invisible man gave us the building blocks of what to expect in later invisible man movies, a scientist driven mad by his own formula and desire for recognition in his field of study. The Invisible Woman has yet to make it on Universal Monsters in Review, so we’ll leave that one out for now, but the rest, The Invisible Man Returns, the Invisible Agent, and Abbot and Costello Meet the Invisible Man, while trying to do things different, end up coming off strangely out of sync. Of these, at least The Invisible Agent was cinematic and entertaining, despite its obvious propagandic agenda. The Invisible Man Returns was kinda of a bore with too many complicated themes going on, and A&C Meet The Invisible Man was entirely way too long. The Invisible Man’s Revenge seemed…well, different then the rest. The Invisible Man is no longer the protagonist, which is fine because he is the monster, right? But with the story of some maniac wanting to get back what’s owed to him (money), blackmailing and murder and what not to achieve his goals, well…I didn’t really see the need for the invisible man aspect of the film. This easily could have been a straightforward noir mystery without the need of the “mad science” of invisibility, in fact, I’d be as bold to say the entire invisible man part was tacked on and not the central theme, as it should have been. We don’t even get “the invisible man” until the second act. And the encounter with the “mad scientist” was utterly coincidental. The one saving grace for me (though the movie was entertaining regardless of non-monsterism) was John Carradine as Doctor Peter Drury and Leon Errol who played bumbling drunk Herbert Higgins. Leon stole the show, in my opinion, and was truly a pleasure watching preform. Okay…as it seems, I’ve again gone on waaay too much. Lets see what our estimated guest author had to say about The Invisible Man’s Revenge.

“The Invisible Man’s Revenge” is the fifth film in the series, and how did that happen? As far as monsters go, the Invisible Man isn’t that impressive. You can’t see him. He’s not even malformed or hideous to look at when he’s visible. Imagine people paying money to go see nothing and being frightened by it.
Historically, this counts as a horror film. It’s not. It’s a pot-boiler, a melodrama with sparse horror elements. A man returns to London only to learn he’s been bilked out of a fortune in diamonds by people he considered friends. He vows revenge, which comes when he meets a mad scientist. Actually, he’s quite friendly, as far as mad scientists go. He even has his hair brushed. 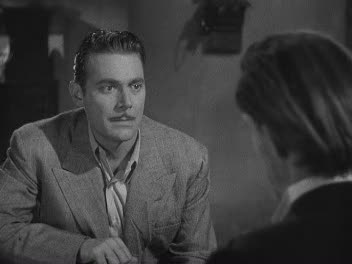 The scientist has created an invisibility formula. It alters the skin pigmentation, changing the way light refracts. Think of the Predator, only thin and with a funny mustache.
Once the good doctor injects our lead with the serum, he goes after his former friends with a see-through vengeance.
The special effects are neat, in the same way that card tricks are neat. You’re not quite sure how they did them, but you’ve got a pretty good idea. There are lots of floating objects and hard-working actors reacting to something attached to fishing line. The scenes where the Invisible Man unwraps the bandages from his head to reveal nothing are still impressive, even if he’s less the Invisible Man and more the Walking Blank Chromakey Weather Map. One expects to see a high-pressure front forming where his forehead should be. 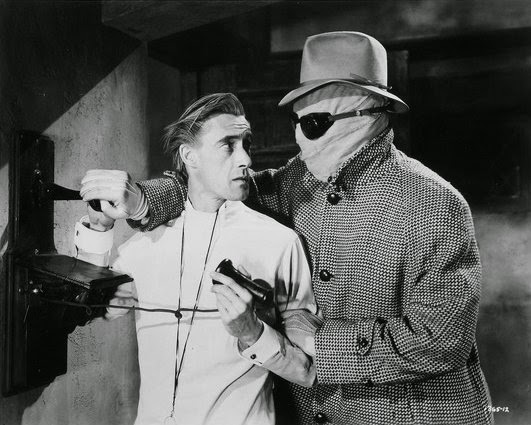 Jon Hall as the unseeable male is passable. It seems like the filmmakers believed they had the next big star on their hands, and he received top billing. And while stalwart B-movie performers infest this movie like bedbugs in a Mississippi motel room, the real standout is John Carradine as the crazed yet urbane Dr. Drury. He gives this programmer an air of elegance it would have otherwise lacked. 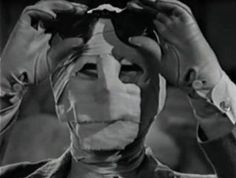 The main problem with “The Invisible Man’s Revenge” is, when you think about it, there was no need for him to be invisible for him to carry out his evil plan. He could have achieved his ends simply through threats of violence. A man will sign almost any self-incriminating piece of paper when he’s staring down the barrel of a .38. It feels like they took a script that was floating around the studio and adapted it to the Invisible Man series. This practice still continues in Hollywood, which you know if you’ve ever watched a “Die Hard” sequel.

Set in London, the main characters all sport American accents. The ending feels tacked on, with a short speech at the end to remind the audience of just how evil it is to be evil. I imagine if this movie had been made pre-Code, it would have been far more enjoyable.
As it stands, this is a decent little feature, light as a cloud. You’ll forget you saw it soon after, but again, you’re five movies into the franchise. Anything is bound to get a bit long in the tooth after that long. “The Invisible Man’s Revenge” is for completists only, and even those who insist on seeing them all are better off watching “Abbott and Costello Meet The Invisible Man” first.

Please call me X. Everyone does. When I was a kid, fourth grade, to be exact, I wrote a horror story for a class assignment. It was so good, they called my mother in to the office for a conference on a day when school was closed for students. The fourth grade teachers and the school principal wanted to have me evaluated by a psychologist. The school staff couldn’t figure out why I would want to write a story that was violent or had frightening images. Why wasn’t it football, puppies and rainbows?I wasn’t that kind of kid. My mother knew that. And she promptly told those teachers, the principal (and that horrible school secretary, the one who looked like a Raggedy Ann doll, possessed by Pazuzu) and anyone else within earshot to go f**k themselves. I still write scary stories. It’s my job. It’s what I do. It’s what I’ve always done.
You can keep in touch with X on his prolific podcast Kiss the Goat and Screen Kings. You can find his work, including his newly minted novel Hunting Witches, on the altar of Amazon by following the link provided here.

Did you enjoy what you read here? Be sure to subscribe to our SPAM FREE newsletter. Be the first to get new book releases, sales, giveaways, future reviews and new series’, guest posts, and of course…a FREE eBook (click below).