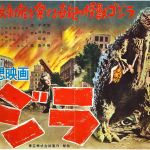 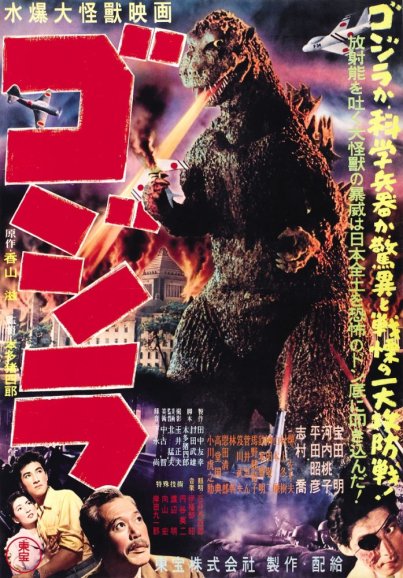 Godzilla is one of the best examples of how science fiction and horror can relate certain fears within society and that they (the movies) are not just kids movies or nonsensical. I mean, sure, there are plenty of nonsensical movies out there, especially within the genre of horror and science fiction, but if I could be so brash as to say that a majority actually do serve a purpose. Storytelling has always been our way of relating concern or passing on wisdom, teaching the new generation our fears and our struggles and what threats, missteps, whatever, to look out for. Watching the original televised trailer for Godzilla (1954), it definitely begs the question of what Godzilla really symbolizes. The very first screenshot shows audiences a “once peaceful city of Tokyo, now laid in ruins…,” but given the historical context, I had to ask myself just what city was I really looking at, a fictional Tokyo, or a literal Hiroshima or maybe a literal Nagasaki? What is it that Japan seems to be afraid of? Thankfully, our guest author is here to help explain some of these things in his review. Please welcome, Kurt Thingvold.

Two notable things stand out in World War II: the bombing of Pearl Harbor and the attacks on Nagasaki and Hiroshima. Why should they stand out? Easy, they were the beginning and the end point in our conflict with the Japanese. Both conflicts ended in multiple deaths, a beginning, and an end to the horrors of war. Millions dead—countries in shambles. America recovered, Japan recovered, but not before having to surrender their military forces in order to prevent Japan from re-arming and starting another war. This marked the end of World War II, the world remained in peace.

When Japan surrendered their forces it made the country feel weak and they feared invasion, while the invasion would never come—the fear remained—only in the last twenty years, or so have the Japanese fought to regain a glimmer of military presence. A second horror remained in the eyes of the Japanese people.  Two Atomic bombs had obliterated their fellow countrymen and woman.  The horrors of the war had never escaped the small country. Even through the decade following the war—the fear of nuclear weapons haunted their dreams—who was to defend their country, now, that a small defense force was in charge of keeping the invaders out, what if, they had to deal with a situation that had never become the small country? 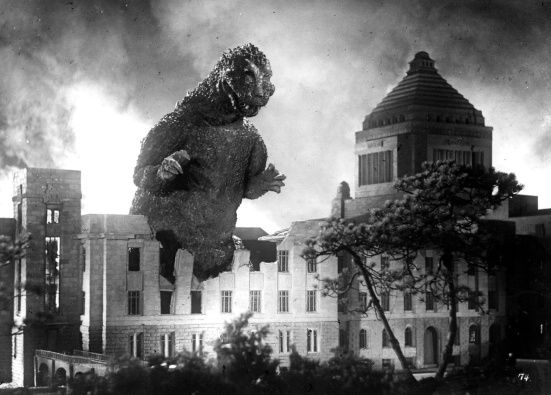 In the1950’s, a Japanese film company wanted to make a film about the horrors of war— the original idea never came to fruition (based on the invasion of Indonesia, the Japanese refused visas).  When producer Tomoyuki Tanaka was flying back to Japan after failed negotiations with the Indonesian government to shoot the film, he looked out at the ocean, and thought about a monster that comes from the sea and attacks the mainland! While the idea seemed to be a ludicrous idea, it would serve the film company well. The film company was known as Toho Studios.  The Film would come to be known as Gojira (Godzilla).

The movie starts out in the ocean, we see a boat,  the crew seems to be having a grand old time, singing, dancing and joking around, suddenly, a flash of lights, the boat begins to sink in a fiery mess, slowly, sinking below the ocean floor.  Shortly after the sinking, a second boat is sent to investigate, the same flashes are seen, and the second boat has a meeting with the ocean floor, with few survivors. A fishing boat from the nearby island is also destroyed, causing the residents of the nearby island to venture into Tokyo to seek aid and relief as the fishing near the island have plummeted down to near threatening levels. Once the locals arrive they describe a large creature destroying their villages, the Japanese concerned they decide to send renowned paleontologist Dr. Kyohei Yamane to investigate the islander’s claims.  Once he and his team arrive on the island– they discover the village in almost ruins—Dr.Yahmane discovers a giant footprint of the massive creature, with a trilobite embedded within the footprint, which turns out to be radioactive. The village bell rings out and the creature finally reveals itself—the villagers dub it Gojira (Godzilla). After this horrifying discovery Yamane returns back to Japan and presents his findings that “Gojira” is a remnant of dinosaurs slumbering beneath the waves and the testing of atomic bombs have disturbed his sleep.  The Japanese government responds by sending a fleet of ships to deploy bombs and try to destroy Godzilla. Which, causes the creature to rise and head towards the mainland. 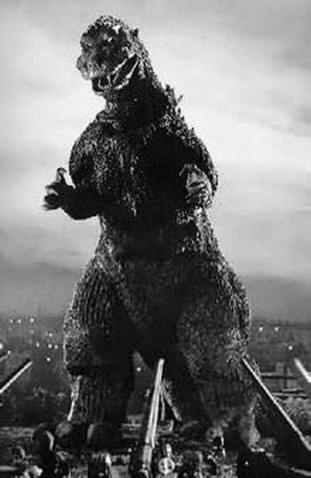 Dr. Yamane’s daughter Emiko, who is engaged to a colleague. Dr. Serizawa, she does not love the man as she loves a young trawler operator Hideto Ogata, a young reporter arrives to interview Serizawa and he refuses.  He does show Emiko, a secret project he is working on. In which, the air is removed from the water, causing fish and sea life to disintegrate.  This Horrifies Emiko.  “Gojira” begins to attacks the mainland, after a few short minutes the attack is over and he returns to the ocean.  After the attack, the government consults with the Japanese Self-Defense Force (JDSF) to build a 100 ft. electrical tower to kill the creature. Dr. Yamane is distraught that they plan to kill the creature rather than studying it. Emiko and Ogata are waiting for her father, so they may have permission to wed. Ogata and Dr. Yamane, engage in a fierce vocal battle about the fate of the creature and Yamane orders Ogata to leave.  “Gojira” Emerges again in Tokyo bay and attacks the city a second time.  Ripping through the trap the JDSF had set, breathing his radioactive, melting the steel like wax. Godzilla continues his rampage destroying and killing thousands of citizens. After, the attack, we are introduced to the horrors of the previous night. The dead and wounded overcrowd the hospitals. Emiko runs to Ogata and tells him of Serizawa’s weapon the “Oxygen Destroyer” Both go to Serizawa and plead with him to use the Oxygen Destroyer on Godzilla and stop him once and for all. Serizawa hesitant to use the weapon, he decides to use the weapon, but not before destroying the documents.  Ogata and Serizawa travel to where Godzilla was last spotted, both of them dive to the bottom of the ocean. Once they spot Godzilla, Serizawa plants the bomb, he motions for Ogata to surface. Serizawa cutting his own oxygen supply detonates the bomb. Destroying Godzilla and the secrets to the weapon with him.

We catch a glimpse of Godzilla rising from the ocean as he melts away.  We are left with a quote from Yamane, as they mourn for their friend, Serizawa.

“I can’t believe that Godzilla was the only surviving member of its species… But if we continue conducting nuclear tests, it’s possible that another Godzilla might appear somewhere in the world again.”

While the plot may seem silly, it portrays its dark tones rather well—Godzilla being an allegory for nuclear threat/invasion, the characters interact with the creature with either horror or admiration. And a key scene that plays into this is where Yamane is describing the creature and its possible origins, and why it is so intent on destroying Tokyo. While, other players in that scene want it destroyed with no question. We see people struggling in awe on how to deal with a threat that seems new, but now have to deal with it at half their normal strength. Another scene that shows a real struggle and emulates of the idea that something of this magnitude (using nuclear technology) is where Emiko tells her father she plans to marry Ogata, and he agrees that Godzilla should be destroyed.  These two scenes show a man struggling to convince others that what he wants is for the best. Knowing the power of what has occurred and what could occur. A nuclear attack was still a possibility in the 1950’s—not by intention, of course. Americans were still close enough to the country to accidentally cause more damage, an incident did occur, The Lucky Dragon No.7 was close enough to Bikini Atoll during a test to receive fallout from the explosion, causing major concern for the Japanese. (The first boat attacked in the movie was based on Lucky Dragon No.7). Another scene, which, we should play close attention to is when Godzilla first starts attacking Tokyo, setting the buildings on fire, destroying everything in his path. The JDSF is useless in stopping him. This plays homage to the attacks on Nagasaki and Hiroshima; there is even a brief mention of the attacks. A mother holder her children and trying to comfort them tells them in sobbing words. “We will be with father soon.” Indicating he was one of the victims of the bomb. Godzilla is a powerful force that relentlessly attacks the people of Japan, and themselves feel useless in stopping him. 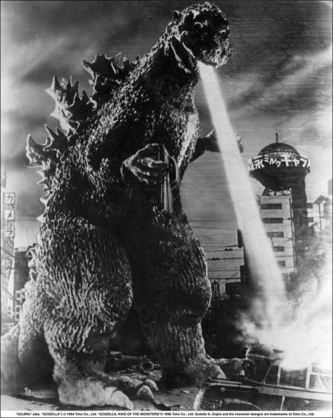 Two years after the first film was made—an Americanized version of the starring Raymond Burr was released. While this version of the film feels is not as dark as the Japanese version. It still shows the horror of the Atomic bombs through the view of an American reporter, while the plot is the same, this version is still rated highly. The American version is a great companion, for a different view of the film. Just two years ago, we released another American Godzilla film, dealing with a different nuclear threat, plants going into meltdowns—this version also plays into the social effect of how we as people are ignorant to the dilemmas and threats that happen across our globe on a single day.

The music also emulated the themes of the film. Heroic and dingy sounds to expand the scenes, and draw you into the moment. While most of the music is accompanied by the monster’s roar, and footsteps it has the rare ability to summon the emotions and fears of the viewer. (Akira Ifukube went on composing for the series up until the mid-90’s).  The scores themselves are memorable and are a joy to listen to on their own.

Godzilla is a movie everyone should see, regardless if you’re a historian or film buff.  The movie portrays a lot of themes dealing with the atomic age and war, in general. While Godzilla has spawned off from the original message and horror of the first film, it still portrays a message of anti-nuclear weapons.  During the sixties and seventies, the Godzilla films took over as a protector of people.  All Godzilla films portray a message whether it’s from one of the sillier movies, or the dark depressing atmosphere of the first: We need to find a way to protect ourselves, we need to take a look at what we do on a daily basis and think about how it is going to affect ourselves, or the land and people around us. Overall, Godzilla may have changed over the last sixty years, but the message itself still remains the same. 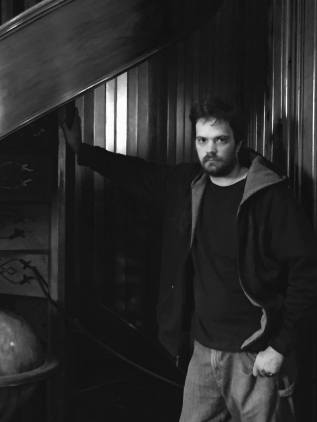 Kurt Thingvold, no stranger to Machine Mean, was born and raised in IL. He finds passion in writing, that helps calm his demons. He grew up in a tough household that encouraged reading and studying. He spends his time writing in multiple of genres. His published short story, Roulette, can be found on Amazon. When not writing he can be found playing games, reading, or attempting to slay the beast known as “Customer Service”, which, he fails at almost every day. As mentioned, Kurt is a frequent flyer here on Machine Mean, you can also check out his previous review on Ridley Scott’s legacy movie Alien here. 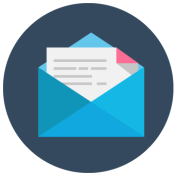