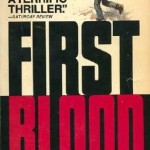 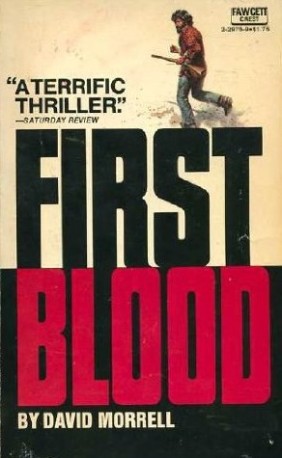 “First came the man: a young wanderer in a fatigue coat and long hair. Then came the legend, as John Rambo sprang from the pages of FIRST BLOOD to take his place in the American cultural landscape. This remarkable novel pits a young Vietnam veteran against a small-town cop who doesn’t know whom he’s dealing with — or how far Rambo will take him into a life-and-death struggle through the woods, hills, and caves of rural Kentucky.

Millions saw the Rambo movies, but those who haven’t read the book that started it all are in for a surprise — a critically acclaimed story of character, action, and compassion.”

I’m ashamed to say that I had no idea First Blood was a book before it was made into a movie. Not a single clue. But, I’m glad to finally have this error corrected and was even more glad to have gotten the chance to read this amazing book. Now, there were some definite drastic changes from film to print or print to film more like. And that’s okay. I never expect the movie to be just like the film. There have to be differences, so long as the essence remains intact. For example, I had read Stephen King’s IT before attempting to watch the made-for-TV movie starring Tim Curry. I made it maybe 30 mins into the film before turning it off. TV movie IT was too far removed from the source material to be enjoyable. Whereas, as another example, Hellraiser was based on The Hellbound Heart by Clive Barker, and it not only expands the story, it diverges from it regarding Cenobite leadership and other details. However, the difference between why IT as a movie failed and Hellraiser succeeded is that Hellraiser kept the essence of the original source material.

And for the most part, the essence of First Blood, be it Sylvester Stallone or just the imaginative projection from hearing how David Morrell describes John Rambo, is beautifully captured, more so I would say in the book because we are given the characters internal thoughts. The director and Stallone for his part did a great job conveying through action and struggle Rambo’s internal conflicts, but in the book, it becomes, even more, clearer. Did you know that when Rambo arrived in that pinewoods mountain town (called Hope in the movie), he had been kicked out, or “pushed,” as he calls it, at least a dozen times before? That is where the “pushed” thing comes from during the movie that doesn’t make much sense, but in the book it does.

No spoilers here, but the end is veeerrryyy different, and I’m not sure which one I like the most. I feel for Rambo in both scenarios, and I love that end scene monolog he has with his old unit commander in the movie. But in the book…dang…it’s just… I’ve said enough.

As far as veteran issues go, both film and book appealed to me and wrung the gauntlet of emotions. More so in the movie than the book, despite the benefit of reading Rambo’s internal thoughts. The movie seems to focus more on Rambo as a veteran, whereas in the book he’s more often referred to as “The Kid.” The book did, however, add a level of polarity to the conflict between the sheriff, a Korean War veteran, and Rambo, a Vietnam veteran, and how each of them refuses to surrender to the other, way more than what the movie offered. In the movie, the sheriff is more of a chump and doesn’t know what he’s walking into, and just seems to be a dick for no reason. In the book, he is more clearly defined. Especially with what happens during the first hunting party. DAMN is all I can say about that!

Overall, if you’re a fan of the movie, you may want to check out the book. I have few doubts you’ll be disappointed.

David Morrell is the author of FIRST BLOOD, the award-winning novel in which Rambo was created. He holds a Ph. D. in American literature from Penn State and was a professor in the English department at the University of Iowa. His numerous New York Times bestsellers include the classic spy trilogy that begins with THE BROTHERHOOD OF THE ROSE, the basis for the only television mini-series to premier after a Super Bowl. The other books in the trilogy are THE FRATERNITY OF THE STONE and THE LEAGUE OF NIGHT AND FOG. An Edgar, Anthony, and Macavity nominee, Morrell is the recipient of three Bram Stoker awards and the prestigious Thriller Master award from the International Thriller Writers organization. His writing book, THE SUCCESSFUL NOVELIST, discusses what he has learned in his four decades as an author. His latest novel is the highly praised Victorian mystery/thriller, MURDER AS A FINE ART.

THE HOBBSBURG HORROR, 9 tales sure to keep you up at night… 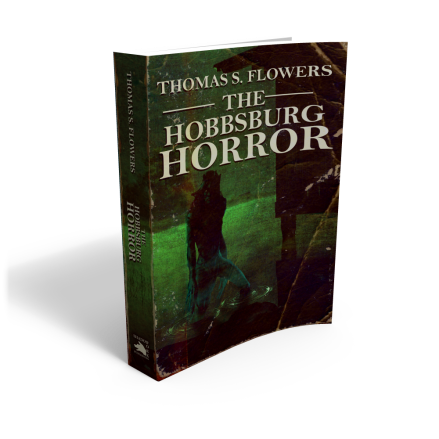