what the heck is EMERGING (Subdue Book 2)? 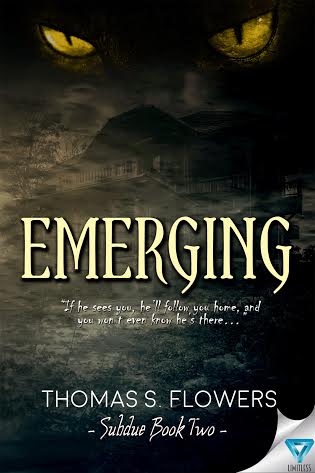 With the recent release of Emerging, book 2 in The Subdue Series, I thought it would be a nifty idea to talk a little bit about what the book is about. Nearly a year ago, I dreamed up this magnum opus of sorts for what I deemed to be a telling of “my war experience.” But not just my own experience, my inference of war and what it can do to people, how war changes people as traumatic experiences typically do. When I had finished, I ended up with a massive 150,000 or so manuscript. Initially, I wanted to keep the series together as one book. I had shopped the book around to several publishers. Without turning this into some long publishing story, suffice to say I had stumbled upon Limitless Publishing, LLC, through a writer resource page. I heard back from LP about a month after submitting my book. And…not to brag or anything; they loved the story. The only problem was that it was too long. Most publishing houses, if not all, try to keep books to a 100K maximum. This has nothing really to do with the author in so much as it has to do with marketing/publication costs. If you’re a big time writer, like Stephen King, you can write whatever or however long you want! For me, I had to go smaller. Instead of deleting parts in the book, I agreed to turn Subdue into a series, thus Dwelling (book 1) and Emerging (book 2) were born. As luck would have it, Subdue had a natural split in the middle of the story. Book 1 (Dwelling) was a character focus book, where I spent most of my time letting my readers get to know the characters and their wounds and motivation, if any. And because there are four central protagonists, I pretty much needed to take up an entire book just to talk about them! So, if Dwelling is a character focused story, what’s Emerging about?

Emerging is a situational focused story. With Dwelling you were able to get to know the cast; with Emerging you’ll get to see what happens to them. Characterization is still key. With anything I write, I focus on characters. I believe, as I was brought up reading the likes of King and Barker and Bradbury, if you can create believable characters and make people care about them, you’ll create one hell of a book. Even if what happens is totally implausible. So long as the characters are human being, as in real humanity motivational type stuff, everything else is fair game. The Subdue Series is fictional, paranormal, perhaps maybe even a little horrific, or dear me, do I even suggest…literary? I’d like to think so. But I’ll let me readers be the judge of that! Because book 2 is situationally driven, the pace I think is faster. The book is longer, but I doubt it feel that way. Or at least not in my own head.

As Dwelling ends with a bit of a cliffhanger, Emerging picks up a few months after the events at the end in book 1. Without spoiling anything, I can say that a majority of the focus is with the house in Jotham and the characters interaction with the house that drive the plot in this second Subdue book. I’ve received some positive comments regarding some of the “flashback” characters. Don’t worry, Augustus and the Fetcher family make a minor appearance in the continuation. Questions about the house are answered, to a degree. Some mysteries are better left unsaid. You might also catch a Lovecraftian vibe in book 2. As with situation, I delved a bit more in mythology creation and mood. For those readers who’ve read Dwelling and have commented on how much you have come to love those characters, I cannot promise not to break your heart. As with life and war, some damages are unchangeable.  There is an apparent theme about suicide, and I hope as you read you find some of those motivations or justifications. I’ll say nothing more on the subject.

Yes. Emerging was equally hard to write. Both books were. But aren’t the best stories worth sharing difficult to write? Consider H.P. Lovecraft’s short story, “The Outsider,” as a superb self-examination of personal fears and anxieties of how the “outside” world sees us. Or consider up and coming author Duncan Ralston’s debut novel, “Salvage,” a classic ghost story that doubles as an examination of depression and overcoming fears of not only our place in society, but of our past. Or even Clive Barker’s excellent novella, “Cabal,” where he talked thru mythos, his fears of how society views and too often mistreats homosexuality as some monstrous thing. I’m not saying mine is as good as these, but I think it fits within the same category. Below you’ll find some more info about Emerging, including Synopsis and purchase (wink wink) links.

Traumatized by war, friends gather for a reluctant reunion…

A historic house in Jotham, Texas harbors a malevolent force, and as her fear grows, widow Maggie Smith pleads with three lifelong friends to gather in her home. But will their presence combat the darkness…or feed it?

Minister Jake Williams fears Maggie has had a breakdown…

Feeling he has no choice, Jake locates the other intended guest, Bobby Weeks, who agrees to go with him but struggles with keeping his lycanthropic curse hidden.

Jonathan Steele, a wounded veteran battling PTSD, arrives with his disgruntled wife. After drinking too much at dinner, Jonathan insults the homeless Bobby, and Bobby is missing from the house the next morning.

The dark past of Maggie’s home awakens in the present…

Jake, whose faith is in doubt, confides in a local priest while he and Jonathan search for Bobby, and Ricky’s ghost makes another visit to Jonathan, causing him to become fixated on saving Maggie from the evil that surrounds her.

As the danger intensifies, trust is elusive, and betrayal is certain…

Maggie might be lost, Bobby confronts a terrible choice, and Jake and Jonathan fight to save them all—before they become more victims of the horror emerging beneath the deadly house in Jotham.

Check out book 1 in the Subdue Series, DWELLING: http://amzn.to/1Ov68Ld