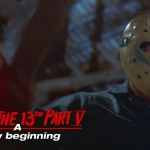 Horror fans can be divided on a lot of different things. The works of Master of Macabre Stephen King comes to mind. Remakes and reboots of beloved classics such as A Nightmare of Elm Street, The Omen, or the upcoming release of another take on Dario Argento’s masterpiece Suspiria can conjure quick debate. We all have our tastes on what is good and what we think is not good. Be that as it may, there are also flicks in which bring instant rejoicing or equally jovial disdain. Take for instance, I believe a majority of horror fans would agree collectively that John Carpenter’s The Thing (1982) is a treasured cult classic. Or that The Exorcist is one of the scariest movies ever made (sure, there’s always that one jerk who denies the truth). And the same goes for the ones we agree we don’t like, such as Nine Lives starring…Paris Hilton (ugh), Shyamalan’s The Happening, or even Exorcist II: The Heretic. This also applies among fans of the Friday the 13th series, while the best ones are hotly debated, the worst is widely agreed upon. And so on this Friday the 13th I thought I’d talk about the one everyone loves to hate, Part 5: A New Beginning. END_OF_DOCUMENT_TOKEN_TO_BE_REPLACED