Creature Features in Review: Humanoids from the Deep (1980)

Okay, two things right out of the gate: this movie is terrible… but I’m going to explain to you why I feel (if you enjoy a certain level of badbad = goodgood) you should still watch it.

Also, it’s basically about mutant fish people raping women (when they aren’t killing everyone else to get to that) but seeing as how I highly doubt there are going to be humanoid fish people waddling out of the sea and actually raping anyone anytime soon, I’m not going to address that further in any serious way after this intro. I also won’t make a joke out of it, though, and you can call me what you like for that.  END_OF_DOCUMENT_TOKEN_TO_BE_REPLACED

The critically acclaimed cult novelist makes visceral the terrors of life in Jim Crow America and its lingering effects in this brilliant and wondrous work of the imagination that melds historical fiction, pulp noir, and Lovecraftian horror and fantasy.

Chicago, 1954. When his father Montrose goes missing, 22-year-old Army veteran Atticus Turner embarks on a road trip to New England to find him, accompanied by his Uncle George—publisher of The Safe Negro Travel Guide—and his childhood friend Letitia. On their journey to the manor of Mr. Braithwhite—heir to the estate that owned one of Atticus’s ancestors—they encounter both mundane terrors of white America and malevolent spirits that seem straight out of the weird tales George devours.  END_OF_DOCUMENT_TOKEN_TO_BE_REPLACED 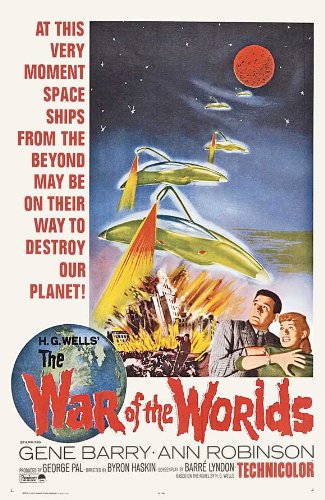 “Amazing! Terrifying! The most savage spectacle of all time!”

“They came to CONQUER the EARTH.”

“Might panorama of Earth-shaking fury as an army from Mars invades.”

These are the tag lines audiences were given while watching Byron Haskin’s film adaptation of the classic H.G. Wells story “War of the Worlds.” While Haskin may have been the director, I’d hang my hat on that George Pal (producer credit) had more to do with the films stylization, considering his previous films, When Worlds Collide and Destination Moon had the some technicolor fluidity. Also considering the era, the special effects and overall production of the film was out-of-this-world (no pun intended). Pal gave the film a beautiful apocalyptic quality that is visually stunning to watch. The entirely of the film is breathtaking, charming albeit terrifying, from the small California town of Linda Rosa, to the overwhelming inclusion of global invasion. But what is “War of the Worlds?” Lets take this in the story’s natural progression, from novel, to the radio, and finally to film.

H.G. Wells first published “War of the Worlds” in 1897 as a science-fiction piece and perhaps even a social commentary piece on British colonization of indigenous tribes and then subsequently being killed off by disease. Much like Wells’ other works, “War of the Worlds” was destined to be an influential story, spawning dozens of adaptations, including radio.

October 30th, 1938 is indeed a day that will live in infamy! Well, until FDR will replace it with the Attack on Pearl Harbor, yet interestingly, both infamy dates could be argued to have spawned from the same trajectory…being WWII, but I’m getting off track here.  Produced at Columbia Broadcasting System, “War of the Worlds” aired as an episode of the American radio drama anthology series, The Mercury Theatre on the Air. It was performed on Halloween during an era before television sets were a household item. Radios dominated living rooms.

On that fateful night, no doubt thousands were huddled together listening intently to the cautionary voice of Orson Welles as he retold the classic H.G. Wells story. Many of course knew this was a drama production; however, many more did not catch the “fiction blurb” and believed the events unfolding were real. It could be said that Orson Welles was inspired by many radio drama shows of the day, however, I think a strong argument could be made that he was also making a statement, a statement of the gullibility of the mass public who seemed to be willing to believe just about anything aired on the radio and perhaps maybe even a commentary of the growing threat from Germany at the time, this being 1938. But this goes back to the original story and the adaptability it has for each generation.

Quoting from the 1953 movie, a radio reporter states, “In the First World War, and for the first time in the history of man, nations combined to fight against nations using the crude weapons of those days. The Second World War involved every continent on the globe, and men turned to science for new devices of warfare, which reached an unparalleled peak in their capacity for destruction. And now, fought with the terrible weapons of super-science, menacing all mankind and every creature on the Earth comes the War of the Worlds.” Here we get a glimpse into the mindset of the film adaptation of Wells’ novel. We see the generational bent, the dangers of science, so-to-speak.

We have to, of course, understand the day and age. This is 1953, the world is still reeling from the Atomic Bomb, this is by definition the Atomic Age, and will go on to spawn dozens of films that speak to the fears of this era. There is also an interesting spiritualization entwined in the film, pastor Collins is regarded more favorably than in the original novel and with the ending scene at a cathedral on the drink of destruction when the invaders begin to suddenly die, and then…silence, given one of the last quotes, “The smallest creatures that ‘God in His wisdom had put upon this Earth’ have saved mankind from extinction,” we see perhaps a quasi-religious intention in the story telling. Depending on where you land on the fence, some have regarded it negatively, while others positively. Personally, I didn’t find the religious aspects overdone, though I did note them because they are undeniably there. The message I got was the futility in the efforts of mankind to save itself against an seemingly unstoppable force, to be saved in the end by such a minuscule thing.

Regardless of the intentions, War of the Worlds is highly entertaining. Even the effects are still fun to watch, though at times clumsy, an obvious indication given the age of the film. There were many harrowing moments, including the above scene when we finally get a look at the alien in its biological form. When it comes to horror, I’m of the mindset of less is more, and given the films bright colors and almost over-the-top techno science-fiction, this moment and its banality is absolutely chilling. The cast was also good. Gene Barry played an excellent Dr. Clayton Forester and Ann Robinson was a sympathetic Sylvia Van Buren. Another positive of the film was the onset with the small town charm in Linda Rosa, focusing almost exclusively on its characters, and then the slow escalation toward a global event, giving us glimpses of a world-wide invasion. The small town sequences worked fantastically because the audience was “set at ease” with the smaller group interactions and joyfulness of a “simply American life.”  When the chaos is introduced, the film pulls back and gives the audience a larger world view, streets filled with looters and displaced peoples searching for safety.

As the musical score begins its final dramatization (enter sad music), I feel we are given one of the most powerful scenes in the movie, as the alien arm reaches out and falls limp, dead, and then followed by silence. It is a strange joyous while at the same time tragic moment. As Gene Barry reaches out and touches the lifeless alien, we get this final connection as biological being cast in our own worlds set adrift among the endless black of the cosmos. The ending, for me, is directly connected to the opening sequences of the film, the artistic depictions of the “other worlds” and how barren they are. The fact that life exists anywhere is a miracle.  I think that this is perhaps George Pal making a final quip, stating how precious life is, yet it seems all we can do is kill each other. This sentiment should not be lost for our own generation, it certainly was not lost on Pal’s post-Hiroshima and Nagasaki generation.