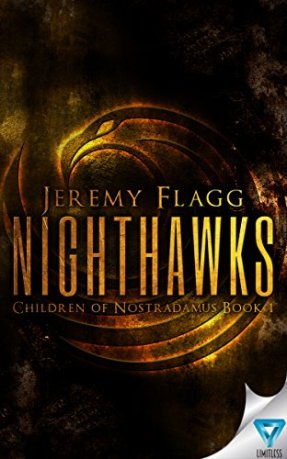 His debut exhibit features the transformation of his high school friend, Sarah, as she went from a shy, soft-spoken girl to a Child of Nostradamus—an individual gifted with extraordinary abilities. Living in a society where the Children of Nostradamus are captured by the government, Conthan’s exhibit draws attention from officials and protesters alike.

A government psychic may be dead, but that doesn’t stop her from manipulating the future…

The deceased White House aide is only remembered for her failed assassination attempt on the president decades before Conthan was born. Foreseeing her own death, she scribed letters to bring together specific Children of Nostradamus on a mission that will change the world.

On the night of the gallery exhibition, Conthan receives one of those letters…

Whispers from the past direct him to visit Sarah, the subject of his paintings, who like many Children of Nostradamus, is being detained in a government research facility. It’s there he finds himself aligned with a rogue group of Children on a mission to prevent a dark future.

As a dark future unfolds, there’s only one hope to stop the destruction of the world…

The Children of Nostradamus.

What readers are saying about Nighthawks:

“This book was released my second day on my new job… I was busted reading it during orientation by the HR manager. I explained how addictive the book was and explained the plot so far and got a judgemental look that sent fear down my spine like only someone in HR can execute. She told me she would read this book and decide my future in the company based on how honest I was about the ‘good-ness’ of the book. I was fairly confident of my job security because I do have excellent taste. [Later] it was confirmed- I have kept my job and she also thoroughly enjoyed this book!” -Amazon Reviewer

“Finally, a tightly woven and highly intelligent dystopian story that breaks conventions in the genre. The characters are well thought out and the plot keeps you thinking throughout all the action and backstory. I’m really looking forward to how this series of books plays out. If you are fans of series like Divergent and Hunger Games, this one will surely elevate you to the next level.” -Edmond Jacobs

“All I can find myself saying after reading this is ‘wow.’ From the very beginning, the book hit the ground running and took me with it. I found myself encapsulated by the gripping plot and intriguing cast of characters with each member being fully developed. I truly got a glimpse into each of their backgrounds and was able to see who they truly were (or who I believed them to be). The world in which the novel is set is grim, to say the least, exactly what you would expect from the perfect dystopian novel. But the plot doesn’t stop there. Unlike many other dystopian novels that I’ve read in recent history, this one manages to weave in supernatural powers for the characters without it feeling like a cliche. The powers are so unique and truly add another dimension of personality to the people that have them. The only other thing I could have possibly asked for to put the icing on the already perfect cake that was this novel was some good action scenes. And let me tell you, I was left begging for more. Every fight and battle is PACKED with action, almost so much that you feel like you yourself have been punched in the face, but in the best way possible. This book is by no means a light read with its 372 pages but trust me when I say with that the pace of this book and how completely entranced I was by the plot, you’ll finish it in no time at all.” -Matt King

“In times like these, we need some heroes. In a dark and broken world, sometimes Fate is the only thing you can count on. Yes, often it seems that superheroes have been done to death, but as the old adage goes, no story is original, and NIGHTHAWKS by Jeremy Flagg is as fresh as they come. I’d love to see this on the silver screen.” -Amazon Reviewer

“Nighthawks is a fast paced high octane superhero story. Flagg takes his love of comic books and translates them from over the top comic book heroes to characters with depth in the first book of his Children of Nostradamus series. Overall the book is a quick read, great characters, and a good sense of what it would be like if you woke up one day with superpowers. I’m looking forward to the sequels in this series.” -Brenda J. Roberts

You can get YOUR copy of Nighthawks (Children of Nostradamus) for the mere price of $3.99!!!

Jeremy Flagg is a high school graphic design and marketing teacher, at a large suburban high school in Massachusetts. Working as a high school educator and observing the outlandish world of adolescence was the inspiration for his first young adult novel, “Suburban Zombie High.” His inspiration for writing stems from being a youth who struggled with reading in school. While he found school assigned novels incredibly difficult to digest, he devoured comics and later fantasy novels. Their influences can be seen in all of his work. Jeremy took the long route to becoming a writer. For a brief time, he majored in Creative Writing but exchanged one passion for another as he switched to  Art and Design. His passion for reading about superheroes, fantastical worlds, and panic-stricken situations would become the foundation of his writing career. Jeremy participated in his first NaNoWriMo in 2006. Now he is the NaNoWriMo Municipal Liaison to theMassachusetts Metrowest Region. Jeremy also belongs to a weekly writing group called the Metrowest Writers. You can check out Mr. Flagg’s impressive work on Amazon.

And as always, if you enjoyed what you’ve read here on Machine Mean, please subscribe to our mailing list by clicking on the image below to receive updates on new articles and book releases, but also the latest and greatest up and coming authors in the horror genre.