Creature Features in Review: Cabin in the Woods (2011) 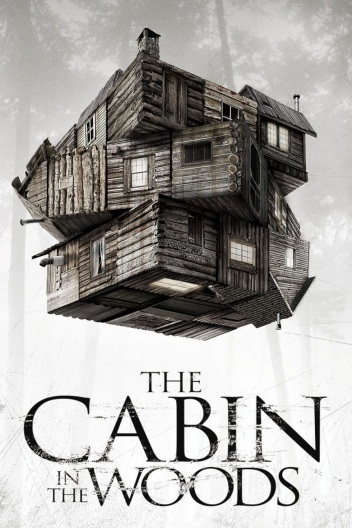 Wes Craven’s 1994 New Nightmare was a movie ahead of its times. In that I mean, the way the story was told, the significance of something we make-believe into being real (knowing it is actually fictional) and having it given back to us as this make-believe thing made real by our own imagination. That was kind of the genius of Craven’s New Nightmare. Freddy wasn’t real, but we pretended he was, as we do with all characters we watch on the big screen, small screen, or even in print, and yes even the horrorish ones. New Nightmare played on that, trapping the imaginative character Freddy in the make-believe world until the “movies” ended and thus releasing the bonds that kept imagination captive. Suddenly Freddy is real because WE made him real. Very clever, if you sit for a spell and think about it. Unfortunately, much like Jason Goes to Hell, audiences, and fans of the Nightmare on Elm Street series were expecting…well…what they have been accustomed to and not this metaphysical metaphor of fantasy meets reality through a sort of cognitive mythological construct. Not all movies fall prey to being ahead of their time. Take 2011’s Cabin in the Woods as a perfect example of the right kind of out of the box thinking movie coming out at the right moment in our social environment, which is to say at the very least uncertain.

Cabin in the Woods

I was raised on 80’s slasher films. Friday the 13th, Nightmare on Elm Street and Halloween filled my nights, and as an adolescent, they may have altered my childhood. However, these classic horror films provided ample education. I learned at an early age, you never separate from your friends, you never skinny dip, you never get drunk, and by all means, never lose your virginity in a sketchy locale. While a multitude of movies have attempted to recreate these classic tactics of terror, few have ever lived up to the original.

In walk Joss Whedon and Drew Goddard with Cabin in the Woods.

Horror movies have a recipe. With an ample suspension of disbelief, a movie builds tension, redirects our fear, and then in a moment of complacency, it scares. This recipe is repeated with variation for a little over an hour and somehow, at the end, our “final girl” perseveres by eliminating the big bad. We are put again into suspense as the credits end and claws emerge, or a hand rises from the grave, or a mask is picked up. There is a formula we’ve grown comfortable with, when it is tampered with, we get uneasy. However, Cabin in the Woods examines this formula, uses it, stomps on it, laughs at it, uses it again, and at the end, we’re left blinking in an entertained disbelief.

It starts with scientists talking about child safety cabinets and how only they and Japan remain viable options. What? Isn’t Cabin in the Woods a movie about a group of people going on a mini vacation to a vacant cabin in the middle of the, well, woods? Cue title scene and then onto the movie we expect.  A fun flirty vibe, filled with sunshine, dreams and the need for relaxation. We have all the expected character tropes necessary to make a mediocre horror film; the jock, the overachiever, the stoner, the sexy girl and the kind of nice guy who we instantly forget is in the movie. Everything about this post screams “middle of the road.” Or does it?

True to form, we’re ten minutes into the film and the group of soon to be killed young adults have met the old man who gives foreboding advice. However, in every scene, we see a hint of something. A man following them reports to his superiors. The old man makes a phone call asking for approval. A flying eagle crashes into an unseen wall. A room in the cabin holds a one-way mirror. There is a horror movie laid on top of something, perhaps a conspiracy? We’re barely into the movie and we already know we’re being played with and it’s not being subtle. Are we seeing hints of a twist? It must be a twist because goodness knows every movie has to have an obnoxious twist at the end. That’s how horror is done.

As the screen zooms out, we realize the scientists are watching the five young adults. Wait, that’s not how horror goes? These goons are watching them, luring them into this horrific situation. Lowering inhibitions with chemicals and increasing their libido, we have no idea to what end, but we know they’re setting them up for disaster. It’s only made more comical as they take bets on how the group will die. We have no idea why this is happening, but we know that the scientists can only lead them to a dangerous situation. The group must begin the catalyst that will set them up for death.

Now let’s recap, cause from here on out something serious changes in this movie. We know it’s a horror movie. We know the scientists are setting the scene for this horror movie. We know death is coming, but we’re still not entirely sure why. As they are led to the basement where a variety of talismans and treasures are stored, we discover they will choose their fate. Zombie redneck tortured family. Meanwhile, a similar fate is befalling a group of Japanese school children, a scenario competing with our movie for victims.

The movie adds a new element, horror movie as a spectator sport. However, the darker, and even more genius aspect is that we, the viewer are part of the movie. Much like the scientists watching their hidden cameras, we are rooting for the body count to begin. As danger looms on the horizon, we are hoping for a massacre. We want those partaking in dangerous activities such as drinking, drugs, or sex to fall victim to the classic horror deaths. And when the sex kitten is about to pull off her blouse, we want her to die. Then she resists and plays coy and we, along with a room full of watching spectators groan. Then science jumps in, releasing a pheromone mist.

Wait, does this potentially explain why in every horror movie stupid stuff happens? Were deranged scientists aiding Jason and those campers were all just victims of a mastermind game player? Did chemicals being pumped into the bedrooms of teenagers bring on Freddy as a hallucination? I’m left pondering if everything I’ve been told is a lie. But wait, I’ll worry about that later, because redneck zombies are about to start killing people. Did I just cheer? Maybe.

As redneck pain-loving zombies achieve their first kill (a girl about to get her groove on) we’re introduced to a new piece of the puzzle. Somehow, the scientists are culling the blood of the victims in some sort of ceremonial effort. Our next clue comes from the drug-addled hippy that is so used to altering his mind, the chemicals created by the scientists do little to affect him. Cue more classic death scenes, often times paired with comedic lines from the viewers in the bunker of scientists. When the victims refuse to split up, scientists manipulate the scene forcing the classic tropes to align to their 80’s horror counterpart.

Cabin in the Wood teaches us that a healthy addiction to Weed can save us in a horror movie.

The movie gets, even more, meta as the remaining two survivors find themselves in an elevator going down into the bunker hidden beneath the cabin. Locked in cages, we see a variety of classic horror monsters. Werewolves, giant bat things, even a unicorn are kept in cages, waiting to be called upon to slay the innocent. As the fool, our high-as-a-kite unlikely hero and the virgin unleash havoc on the underground bunker, releasing hordes of b-rate horror atrocities, we find ourselves cheering on the death yet again. We’re not quite right in the head.

As the final showdown begins, we’re not given a Final Girl showdown of immense proportions. Sigourney Weaver says that if the heroes live, they will destroy the world. The heroes, the ones we’ve been rooting for, either die, or we all die. I’m not sure if I’m annoyed or I commend them as they decide to live, thereby destroying the world. But, you know, it happens.

The snappy dialogue mixed with this meta look at horror creates something entirely new to the genre. We find ourselves cheering on the heroes, only to condemn them, and wanting more mayhem. We learn quickly that we, the viewers of this disaster, are really quite twisted. Most of all, we’re really excited that we got to watch a unicorn slaughter a man. At the start of the review, you had no idea a unicorn would be whom we cheered on. Cause you know, it’s a horror movie.

Jeremy Flagg is no stranger to Machine Mean, having reviewed for us Final Girls during our Freight Fest series, he also is the author of the CHILDREN OF NOSTRADAMUS dystopian science fiction series and SUBURBAN ZOMBIE HIGH young adult humor/horror series. Taking his love of pop culture and comic books, he focuses on fast paced, action packed novels with complex characters and contemporary themes. For more information about Jeremy, visit www.remyflagg.com.