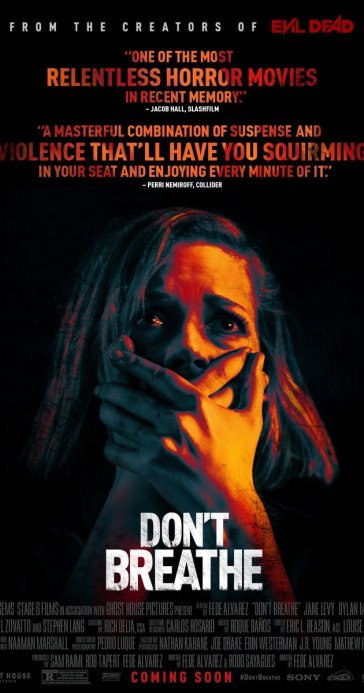 When I went to watch Don’t Breathe, I went in blind. Do you see what I did there? That pun – fucking brilliant as it was…it wasn’t even intentional. That’s just the kind of genius I am and an early warning sign to the shite review you’re about to be hit with. Anyway – I went in not knowing much about the movie. In fact, all I knew were the following points:

That was it. I knew nothing else.

If you plan on watching this film, I suggest you go in with that amount of knowledge too for you will find the film a lot more enjoyable. If you read too many reviews, little details will be given away which could take some of the enjoyment from the film. Not like this snippet of information I’m about to give you, though – this won’t ruin anything but…

The people breaking into the old man’s house are thieves. They’ve heard he has money and they see him as an easy target so, a decision made – rob the fucker. And here in lies the problem: How are you supposed to feel sorry for criminals? Yet that’s exactly what the filmmakers are asking of you, to feel sorry for these scumbags as they find themselves trapped in the blind man’s house and he is hunting them down, to kill them. So… I don’t feel sorry for the youths who’ve broken into his house and I don’t feel sorry for the blind man who is trying to kill them. Now I know they needed a reason to be in the house, I get that. But… How about this: They pass the house… He calls for help. They hear him and run into the house, the house goes into lockdown and he tries to kill them. Straight away I would feel sorry for the youths in the house. They had gone in there to try and help him and now their lives hang in the balance. And that’s without giving it much thought.

Now I’m not saying Don’t Breathe isn’t a good film. It is a good film. Without going into details to spoil the film, I can say that it is very tense and there are some good twists along with some completely unnecessary ones. I don’t want to spoil the film for you so I can’t go into details but I’m sure you’ll see what I mean when you watch it. But some of the twists aren’t the only thing which damages the film. The ending is a let down too – in fact, it is such a let down that I watched the film two days ago and have already forgotten how it ended.

Straining my brain really hard, I just remembered and – yeah – it definitely is shit.

They could have ended the movie during one particular brutal twist scene. When you watch the movie – and it is worth a watch – you will sit up at one particular point and you will be on the edge of the seat. You might even mutter ‘WHAT THE FUCK’… Had they ended the film here, it would have been a much stronger movie and would leave people talking about it. It truly is a potentially nasty, nasty scene and yet, the film director (also wrote it) bottled it and made it go all Hollywood but then I should have expected something shit because this is the guy who right royally fucked up The Evil Dead remake. Seen it? Not a bad movie up until the end when The Evil Dead manifested itself as…. a girl. Fuck. Off. Let’s take a classic film which keeps the actual Evil hidden… And just try and make it gorier and turn the big bad beast into a pathetic little girl. No doubt the cunt watched The Ring or The Grudge and figured small girls are scary… Had he been sitting with me at the cinema, I would have tipped my popcorn on him. Let that be a lesson learned.

Anyway, like I said, Don’t Breathe is hard to review because I don’t want to ruin the twists or give you too much information to ruin the story. It’s a tricky one but – know this – it is a good film. If I was rating out of ten, I’d give it a 6.5 or even a 7 but I’m not rating out of ten, so forget I said that. So what is so good about it? Well, there are some incredibly tense scenes (power cut to the house making the youths just as blind as the blind man being a standout moment). The acting is serviceable even if the blind man did have Batman’s voice mixed with Batman’s nemesis of Bane. But – with all of that – you have really effective music and, more importantly, lack of music. Why the lack of music? Well, the blind man relies on sound to hear people so… When the youths are creeping around being quiet – the music cuts out and we have nothing but silence and the little sounds they make… We hear what the blind man hears. It is also the quietest I have ever known a movie theater to be. So – kudos for that. The only thing which annoys me is… This film had the potential to be perfect but – like so many other horror films of late – it let itself down in a couple of places, most notably the final hurdle.

Until next time, kiddies,

Matt Shaw is no stranger to Machine Mean, having reviewed for us The Invisible Woman (1940) earlier this year. Besides being bothered by me to write reviews for my site, Mr. Shaw is also the published author of over 100 titles – all readily available on AMAZON. He is one of the United Kingdom’s leading – and most prolific – horror authors, regularly breaking the top ten in the chart for Amazon’s Most Popular Horror Authors. Shaw is best known for his extreme horror novels (The infamous Black Cover Range), he has also dabbled in other genres with much success; including romance, thrillers, erotica, and dramas. Despite primarily being a horror author, Shaw is a huge fan of Roald Dahl – even having a tattoo of the man on his arm; something he looks to whenever he needs a kick up the bum or inspiration to continue working! As well as pushing to release a book a month, Shaw’s work is currently being translated for the Korean market and he is currently working hard to produce his own feature length film. Matt Shaw lives in Southampton (United Kingdom) with his wife Marie. He used to live with Joey the Chinchilla and Larry the Bearded Dragon but they died. At least he hoped they did because he buried them. You can follow Mr. Shaw and delve into his work by following his site at www.mattshawpublications.co.uk AND on Facebook at  www.facebook.com/mattshawpublications.co.uk. You can read his review of the infamous Invisible Womanhere.

And as always, if you enjoyed what you’ve read here on Machine Mean, please subscribe to our mailing list by clicking on the FREE BOOK image below to not only receive updates on new reviews and books but also a free eBook anthology of dark fiction.