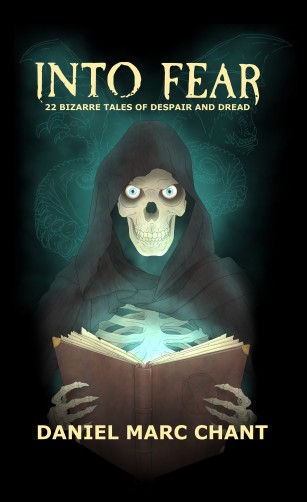 What readers are saying about Into Fear:

“This is an excellent collection of stories- an eclectic mix of dark humor, gothic/classic horror, folklore, fantasy, and sci-fi tinged tales. One of my favorite tales is “Daryl Duncan,” about a man without a memory who awakes to find a copy of “Metamorphosis” and blood dripping from the ceiling. Fans of grim humor will find much to love in Into Fear.” -Amazon Reviewer

“This is quite an eclectic mix of stories and genres. I think the tagline for the book of ‘tales of dread and despair’ is spot on, rather than calling this an out and out horror story book. Don’t get me wrong, it is horrific in many parts, but the overriding feeling in the book is exactly what it says on the tin; dread and despair.” Nev Murray, Confessions of a Reviewer (read Nev’s full review here.)

“Some of the best short stories I’ve read in years, and definitely one of the top ten single-author collections I’ve read ever. Chant has put together something special here – a mix of stories from dark fantasy to pastiche, atmospheric dread to full-on horror, and literary mashups. Do yourself a favor and grab this book!” -Duncan Ralston

Daniel Marc Chant is a frequent flyer here on Machine Mean. He has reviewed for us both The Mummy (1932) and The Creature Walks Among Us (1956), as well as Eli Roth’s strange horror flick Clown (2014). Mr. Chant is the published author of several terrifying tales, including Maldicion, Burning House, and his venture into feline horror, Mr. Robespierre.  Daniel is also one of the founders of The Sinister Horror Company, the publishing team that brought us such frights as, The Black Room Manuscripts Vol 1 & Vol 2, and God Bomb!. You can follow Daniel on his blog, here. And you can read his review on Mummy here. 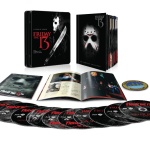 Coming September 13th, 2013 (which so happens to be our next calender Friday the 13th) the Friday the 13th series will be released on blu-ray in one mass collection. Finally, right?!? Finally we’re given what we’ve been asking for ever since blu-ray format movies began coming out in droves. Ever since random Friday blu-rays have eked out into the market. Finally, we have the definitive collection. Or do we? From amateur to hard fans alike, Friday the 13th has been an amazing storyline worth watching over and over. Among other notable historic figures, Jason Voorhees will be remembered as the pinnacle bad guy among the many slasher antagonists of the 1980’s. Jason may not have started the modern slasher (credit for that should go to Myers), but he most certainly defined it. And yes, i’m placing this hockey mask wearing mama’s boy up on the pedestal he so rightly deserves, because with Jason there are no confusing story arches that you have to work to follow. He’s pissed his mom was killed. He’s pissed those morally questionable camp counselors let him drown as a boy and if you walk up into his Crystal Lake territory…well, adios compadre. Jason doesn’t stand on ceremony; he’s driven by revenge without the James Bond supervillain monologue. But I digress, let us get back to this “definitive” blu-ray release!

If you asked me to express in one word what I thought of this blu-ray Friday the 13th collection, my word would be: Exploited. Plain and simple, newcomers and old fans alike are being exploited against this most beloved horror series. Why? Well, lets take this point for point.

Friday the 13th is a longstanding series. There have been many collection releases as the franchise rights have continually changed hands. Understandable, each producer is going to want to put out their collection, but when it comes to a blu-ray $130 box set, is it too much to ask for it to be worth the cost? As of now, blu-ray is king, shouldn’t a blu-ray collection be better than the already released DVD collections? Makes sense to me; makes sense to a lot of fans out there that have already commented on the pending release. Apparently not so much for Warner Bros. Check it out for yourselves, here is what will be included in the blu-ray collection:

Bottom line: though intentionally excited to hear of the upcoming release of a blu-ray collection of my most beloved  80’s slasher, after looking up and reading through the above mentioned features and also seeing the marked up price, well…its not worth the cost, not yet anyhow. I know a lot of hard core fans and folks who don’t really care for uncut enough to deny themselves and will thus be purchasing this collection. Some will be grumpy; others will actually smile as they hand over their hard earned funds. But not me. This release is the same release I already own on DVD; $130 isn’t worth a few extra pixels. Warner Bros. could have done Jason and Friday the 13th right by honoring it with a collection worthy to be on a blu-ray format, but apparently the only thing their interested in is money through the exploitation of endearing fans of the series. This is a very sad Friday indeed.