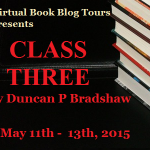 Well well well. Look what we’ve got here? Class Three, a feast de la resistance to the growing horde of literary works in the Zombie genre, Duncan Bradshaw takes us through what is known (the undead), tosses in plenty of gore and meat (the treats), adds a dash of bromance (the laughs), a sprinkle of off beat romance (the awes), two scoops of dark comedy (more laughs), and a tablespoon of religious zealotry (the jeers), and wallah, a new addition (or addiction if you choose) to the classic Romero-esk zombie story. And while the across the pond slang jokes might leave one pondering, the dark comedy shouldn’t, as it is rather prevalent and entertaining. Cruising my way through the chapters, either by Bradshaw’s intention or not, I felt as if I had somehow stumbled upon a long lost episode of Shaun of the Dead. However, to be forthcoming here, I must say, Class Three is a tad darker than the popular British horror-comedy, and for that I am grateful. This fact comes at you from the very beginning, as the book opens with the cataclysmic future and double murder of Colin and Francine at the hands of some rather disturbed individuals and then moving on to a heart wrenching if not entirely uncomfortable breakup of Jim and Sophie…”It’s not me, it’s you…” The statement itself sets the off beat pace. The survival of Jim and his big bro Philip, who “has a plan,” carries us in a 24 hour period till “hey, you got red on you…” And it is in moments like these, such as towards the end, when you’re not sure if this is a serious drama, but thankfully, we’ve got Phillip to remind us that life shouldn’t be so droll.

Hungover, dumped and late for work.

On an ordinary day, one of these would be a bad morning, but today Jim Taylor also has to contend with the zombie apocalypse.

Follow Jim through twenty four hours of Day One, as he and his zombie obsessed brother deal with the undead, a doomsday cult and maniacs in their quest to get to their parents, win his girlfriend back and for them to instigate ‘The Plan’.

Worlds will collide and fall apart in a Class Three outbreak.

From the author, Duncan Bradshaw:

I live in the simply marvelous county of Wiltshire in England with my wife Debbie and our two cats, Rafa and Pepe. We wile away the wee hours learning arcane incantations and medieval wind instruments, surviving solely on what our two furry faced fellows bring us. Winter is a bleak time indeed, when the common vole, the staple of our diet slumbers deep within the earth. I am a little obsessed with the undead, and devour (sorry) with my eyes anything relating to a zombie apocalypse. It means I have to wade through a lot of drivel, but once in a while I happen across something a bit different or so genuinely mental I weep softly as I didn’t think of it first. I suffer my day job with as good grace as I can muster, looking forward to getting home each day to continue with something creative.

You can get your copy of Class Three and follow Duncan Bradshaw and all his antics, here.