Creature Features in Review: The Mist (2007) 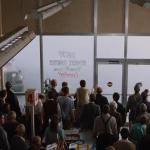 When I first heard of the film “The Mist” I knew nothing about it other than – a mist descends on a town and, hidden within the murkiness, there are… Things. Nasty things that kill people. I couldn’t help but laugh and shake my head. Just what the film industry needed, another knock-off film. I mean, we’ve seen this back in the eighties with John Carpenter’s “The Fog”. Not entirely sure we needed another film with a similar concept. But, then, I heard more about the film. Directed by Frank Darabont, he who made “The Green Mile”, “The Shawshank Redemption” and “The Walking Dead”. I’m a fan. Then I saw it was based on the work of Stephen King. Now, I’m not a fan of King because – for me – I find the books a bit too wordy to read (I have a short attention… oh look, a penny). That being said, I do like the ideas he has.  Then, of course, there was the cast list: Thomas Jane (in my eyes an under-rated actor) and several folk from “The Walking Dead” (Carol, Dale, Andrea… Was Frank doing a test run with the actors before hiring them for The WD?). What the hell, there was enough there for me to give it a go and – you know what – I’m glad I did.  END_OF_DOCUMENT_TOKEN_TO_BE_REPLACED