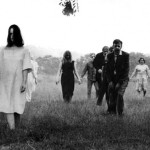 RELEASED this day in 1968, George A. Romero’s epic, groundbreaking classic, NIGHT OF THE LIVING DEAD hits theaters, recounting the tale of a group of disparate individuals who take refuge in an abandoned house when corpses begin to walk in search of fresh human bodies to devour. The pragmatic Ben (Duane Jones) does his best to control the situation, but when the reanimated bodies surround the house, the other survivors begin to panic. As any semblance of order within the group begins to dissipate, the zombies start to find ways inside — and one by one, the living humans become the prey of the deceased ones. 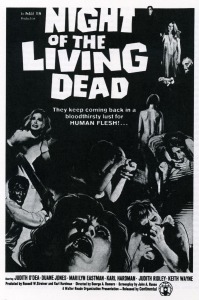 There are few movies out there that represent the feelings of the era in which the film was made as honestly and brutal as Night of the Living Dead. 1968 America was very chaotic, with the deaths of charismatic leaders such as MLK and JFK, post Tet, and the furious antiwar protesters took over in colleges across the nation, including Columbia University in New York. And of lest no forget, Tricky Dick’s infamous call for the GREAT SILENT MAJORITY to stand up and be recognized. Night of the ?Living Dead was very much an subversive answer to the late Presidents speech. And was interesting invoked one of the greatest Civil Rights speeches made, when Dave Dennis stood up in front of those mourning the loss of James Earl Chaney from Meridian, Mississippi, and Andrew Goodman and Michael “Mickey” Schwerner from New York City, when he said, “I’m not here to do the traditional things most of us do at such a gathering…what I want to talk about right now is the living dead that we have right among our midst, not only in the state of Mississippi but throughout the nation. Those are the people who don’t care, those who do care but don’t have the guts enough to stand up for it, and those people who are busy up in Washington and in other places using my freedom and my life to play politics with…”

Not only does Night of the Living Dead hold historical clout, but also became the predecessor to an entire sub-genre in horror. Think about it. Before Romero, zombies were still in the realm of voodoo witch-doctors and crazed plantation owners, space alien mind control, or even atomic aged ghouls. Not saying those sub-genres aren’t good in their own right, cause anyone whose seen The Serpent and the Rainbow can attest that voodoo zombies are still scary. But Romero created something new, a new monster in the lineup of Frankenstein’s, Vampires, Werewolf’s, Mummy’s, fish people, and the like. Without Romero we wouldn’t have The Walking Dead, Fear the Walking Dead, Dawn of the Dead, Day of the Dead, Resident Evil, Zombi3, The Beyond, and a laundry list of films that benefited from George’s take on walking flesh eating ghouls.

And besides all this, Night of the Living Dead is a damn fine horror movie. Low budget and gorilla in nature. The story was plausible and the characters felt real: we know these people; they’re us, we’re them. Romero’s take on zombies is fundamentally about the people who are trying to survive and how they react given certain situations. How we ultimately take sides and are not quick to listen to the ideas of others. Our fight or flight response forces us into making poor decisions, instead of working together as a group. And then in the end, much how Ben met his fate, we needlessly die.

One of the best reviews I read on Night of the Living Dead wasn’t really a review, but rather a review on the audience during a screening in 1969. The unknown reviewer noted the following:

“The kids in the audience were stunned. There was almost complete silence. The movie had stopped being delightfully scary about halfway through, and had become unexpectedly terrifying. There was a little girl across the aisle from me, maybe nine years old, who was sitting very still in her seat and crying. I don’t think the younger kids really knew what hit them. They were used to going to movies, sure, and they’d seen some horror movies before, sure, but this was something else. This was ghouls eating people up — and you could actually see what they were eating. This was little girls killing their mothers. This was being set on fire. Worst of all, even the hero got killed. It’s hard to remember what sort of effect this movie might have had on you when you were six or seven. But try to remember. At that age, kids take the events on the screen seriously, and they identify fiercely with the hero. When the hero is killed, that’s not an unhappy ending but a tragic one: Nobody got out alive. It’s just over, that’s all. I felt real terror in that neighborhood theater last Saturday afternoon. I saw kids who had no resources they could draw upon to protect themselves from the dread and fear they felt.”