A movie about the living dead coming out of someone’s television is a movie that screams for a good tagline, and there’s so many that could have been picked. Do you know what they used? “The living dead are here, and they’re lusting for blood…yours.” That’s so bad. I would have used something that focused more on the television instead, something like “Didn’t your parents tell you television was bad for your health…” or “Don’t get too close to this T.V., it bites” but no, they just had to make it about the zombies. I can understand them wanting to focus on the walking dead, but the problem is their chosen tagline implies that the zombies actually want blood, and that’s not really the case.

As far as I could tell, not a single one of them wanted anything but a sparring match. They love to beat people up, strangle them, and throw the bodies around, but drawing blood never seemed like a real desire of theirs. If they just had to use the zombies in their tagline, maybe they should have gone with something more accurate like “The living dead are here, and their lusting to kick ass…yours.” Sure, it’s worse than the tagline they had, but at least it’s accurate. Let’s get this over with, my head is starting to hurt just thinking about how awful this movie is.

Our story begins with the mistaken delivery of an old television set. It was meant to be delivered to a museum of the occult but ended up being sent to a writer’s house instead. Not being a fan of television, the writer throws it in a room and forgets about it, but this is no ordinary television set, something our writer only becomes aware of after it spews forth a gang of zombies who proceed to turn him into designer art. Three months later and a new family has purchased the writer’s house, but with the parents still being overseas, it’s up to siblings Jeff and Zoe to get the house ready. While settling in, Jeff comes across the haunted television set, but having no idea it’s a gateway to some hellish dimension, he plugs it in and enjoys the fact that he just got a free T.V.

Almost immediately, things get weird and a beautiful woman comes out of the television to tempt and mock the confused young man before popping back behind the screen to laugh at his bewilderment. The woman’s laughter is quickly cut short by the appearance of the “garbage man”, a mysterious being that patrols whatever world the television connects to, destroying any of the digitized demons that get out of line. It’s the mysterious guardian’s job to keep the undead of that realm from escaping into ours, but three months ago, five zombies escaped his watch, killed the home’s previous owner (the writer from the beginning), and proceeded to hide in the woods nearby where they’ve been ever since. It’s now up to Jeff to either kill the five escapees or get them back to the garbage man, and the only help he has is his 17-year-old sister and an old-fashioned Texan who lost his wife to the accursed T.V.

The trio must defeat the zombies or face…something. I’m not really sure what since the movie never quite feels like enlightening us, but it’s supposed to be bad. I don’t know how bad since it seems to me like someone could have just thrown the television in a deep lake or something, but sure, five slow moving zombies with no ability to infect anyone else are a major threat to the world somehow.

This movie is so bad, just so, so very bad. I don’t like to disparage someone’s work like this because even if it’s terrible, it was still a labor of love for the creators, but this is one of the worst movies I’ve ever had the displeasure of viewing, and that is not hyperbole. It takes a lot for me to not like something cheesy since I’m a “more cheese the better” type of movie lover. Heck, I’ve watched the 80’s Howard the Duck movie dozens of times, and not once have I failed to enjoy it, but The Video Dead is on a whole new sub-level. It might be cheesy, but it’s the type of cheese you’d find in the back of the fridge, rotten and easily forgotten but for the stink it makes, the stink in this case being the memory of having to sit through an hour and a half of this completely irredeemable movie. There’s so much wrong with this film, bad acting, terrible dialogue, a weak story that never went anywhere, and awful makeup work all combine to create the perfect storm of poor film-making.

Never having a clear reason why stopping the zombies was of such importance was just one of the many things wrong with this movie. Most of the problems involved the dumb story, a story that was completely ridiculous even for my taste, and I’ve enjoyed some pretty ridiculous movies (I own most of both Troma and Full Moon’s catalog to give you an idea). Here are just a few examples of how bad the story was:

You should be able to see the pattern of how bad the story for The Video Dead is at this point, and I didn’t even list all the ridiculous stuff you’re going to be dealing with if you give it a watch. Sadly, I’m not done explaining why this one should rest in the dustbin of history for all eternity.

Another ingredient in this film’s recipe for disaster is the makeup. The zombies look bad, like the clearance bin at your local grocery store after Halloween bad. Anyone near a party store should be able to create these very same zombies with fifty dollars in their pocket, maybe even less if they were crafty. The few effects the film employs (remember, these zombies only beat you so they didn’t need much) are horrible and another baffling example of filmmakers using effects that they couldn’t have possibly thought were going to be okay. Blood has both the color and consistency of watered down cherry Kool-Aid, the one torn up body looked like she was covered in bloody newspaper instead of ground up flesh, and the prop legs sticking out of the previously mentioned washing machine probably looked better attached to the mannequin they stole them from. I made a movie in elementary school using a friend’s camera where I basically just set a bunch of LEGOs on fire, it didn’t look much worse than what’s here.

The final ingredient for disaster was the acting. I completely understand that they most likely didn’t have the budget for great actors, but I would have expected at least half decent actors. Judging by everything else in this movie, the dialogue was going to be horrible regardless of who they got to say the lines, but it’s even worse when lines are said by actors that don’t seem like they want to be there. The zombies are bad enough, but at least the makeup hides their lack of enthusiasm, but that’s not the case with the actors playing the living. 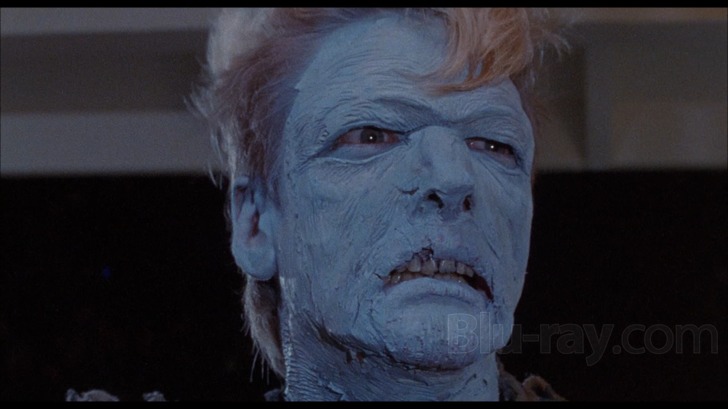 You can very much tell how half-hearted their performances were with the very worst being Sam David McClelland as Texan Joshua Daniels. I’m thinking he got Midwesterner confused with Texan because he in no way sounds like a Texan, and him saying “Boy” over and over again wasn’t going to change that. If there was one bright spot in the pile of mediocrity, it was Rocky DuVall who played Jeff Blair. He’s not good, but he was obviously enthusiastic about being a part of this movie, and I can appreciate that, more so because he wasn’t a trained actor but a drama student from the local high school. Everyone else came across as bored and unhappy to be participating, not that it mattered. Even a fantastic group of actors couldn’t have saved this. It would have been like trying to put out a five-alarm fire with a blanket.

If you have some masochistic need to punish yourself, then by all means, give The Video Dead a watch, just don’t blame me for the nightmares it inspires. Not nightmares based on the movie itself mind you, but of being strapped into a chair Clockwork Orange style and being forced to watch it. 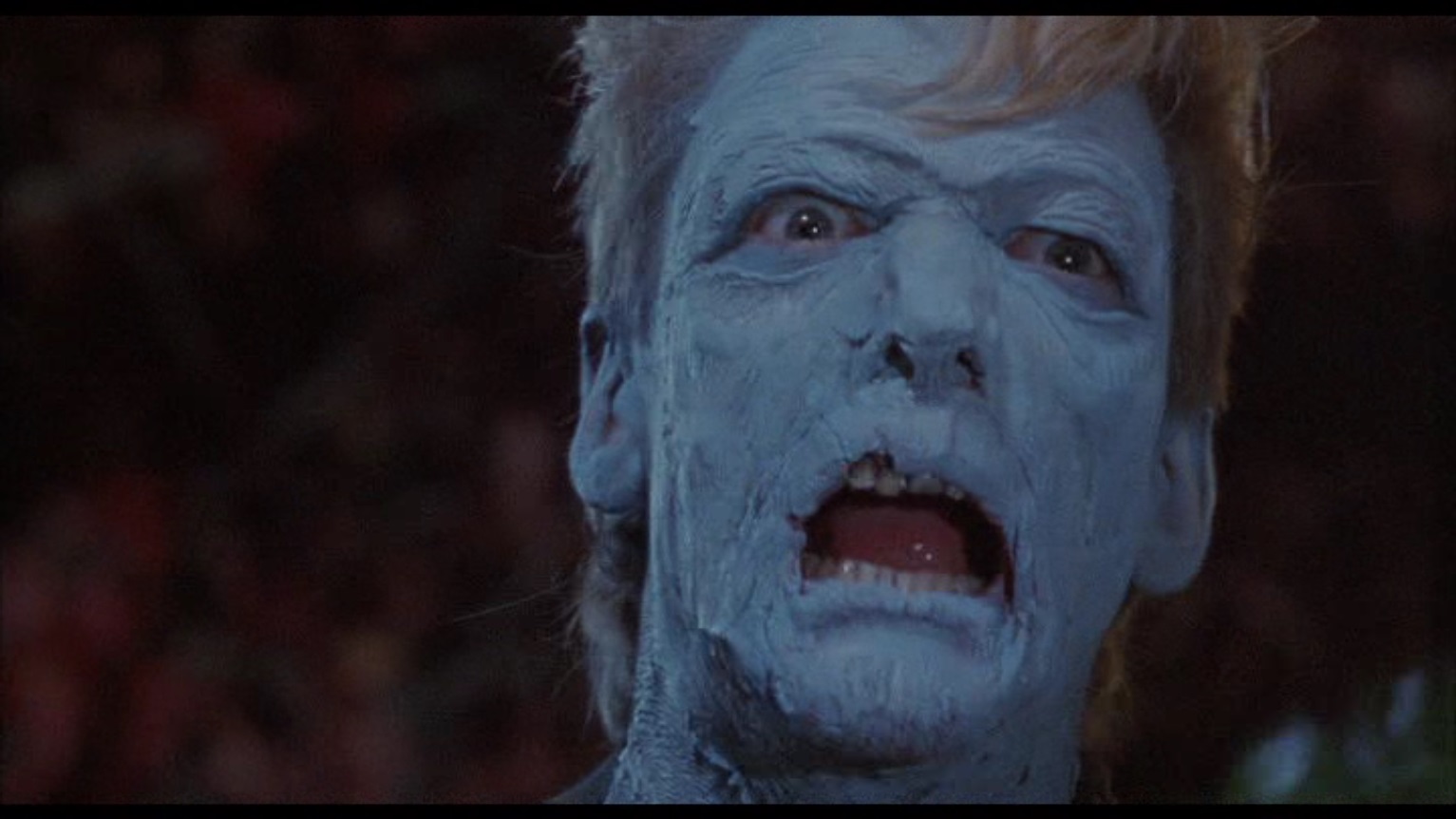 Andrew Willis Taylor lives in St. Louis, MO with his wonderful girlfriend who doesn’t mind his lengthy diatribes on why Benjamin Sisko was the greatest captain. When he isn’t writing or turning old junk into usable household items, you’ll find him exploring new areas, volunteering downtown, or plopped in front of a television watching Doctor Who and Star Trek. He also has a weird aversion to writing short bios that leaves him unable to figure out what to put down. I think he likes puppies or something too.

“Like the vampires it so full-bloodedly portrays, Brian Lumley’s Necroscope series just gets stronger. His lively mix of action and monstrosity transmutes the base cliché of the vampire and turns it into a wonderfully contemporary bane”–Fear magazine.