[ STARTS WITH A SPOILER AND NEVER LOOKS BACK *THE CROWD REJOICES* ]

Have you ever seen that episode of Cowboy Bebop in which Spike leaves a lobster in the Bebop’s backup refrigerator for a super long time, birthing a small, amorphous creature that hunts the crew of bounty hunters (or “cowboys” in the show, shucks howdy!), spearing them with something from its body that knocks them out and incapacitates them? Yeah, this movie is like an expensive, pretty, gorier, and over-serious version of that. I have a feeling I’m not the first to make this comparison, but either way it fits. Something about the way the creature is handled and how it moves and hides and the camerawork when it’s near.

It could also be said that the Cowboy Bebop episode I’m referring to is itself an homage to Alien (ha! I’m only two paragraphs in and I found a way to bring up Alien—my obsession is nearing its final, truest form….), which itself was a transcendent evolution of earlier Sci-Fi/Horror film tropes and themes. So, at this point, all SF/H films (especially those set in a ship in space, on other planets, etc.) could be said to lead back to Alien as being a major influence. Or at least the general framework and approach set up by that film. And as I’ve said before in earlier ramblings and quoting others, the biomech humanoid creature in Alien that hunts the crew could just as easily be a vampire in a castle or Dracula specifically on his trip to London on the Demeter (as I quoted Valaquen of the Strange Shapes Alien franchise blog stating earlier in my Planet of the Vampires review), when boiled down to asymmetrical survival horror by an unknowable creature. Everything old is new again.

Buuuuuuuuuuut I’m not even talking about it like that. I just couldn’t get that CB episode out of my head for pretty much the whole middle stretch of this film. Not their fault. And if anything, it made me like this one more.

Okay, got all that reference and association heavy preamble out of my system…so let’s get to the review.

Just kidding! We have to do the obligatory summary section!

In the near future, a small team of spacers inhabit an appropriately larger and more elaborate International Space Station, and we join them as they await the return of an unmanned probe on its way back from Mars with soil samples. In a moment of almost-stupid/decently-cool Futurism™, the probe is literally caught in a big cyber-machine arm’s hand-like piece of equipment.

Then, one of the scientists begins examining the samples from Mars in a sealed chamber, the rest of the crew looking on through a big window. He’s able to revive a dormant cell—complete with a cute direct reference to Re-Animator tucked in and delivered by Ryan Reynolds, one of the engineers onboard—in the soil samples, the first proof of life outside Earth. It grows a little more complex, similar to an Earth-like multi-celled organism. This being a huge revelation and achievement by implication, a live feed of a group of school children names the little being “Calvin”. If only this Calvin was the more playful, childish scoundrel of Calvin and Hobbes, and not the evil embodiment of a Calvin-pissing-on-something decal on the back of shithead’s truck who cuts you off in traffic For No Fucking Reason.

There’s an accident and Calvin seems to go dormant again. The scientist uses a tool to shock Calvin and Calvin apparently isn’t having any of that. The little weird creature that Calvin already is wraps itself around the scientist’s hand and fucks it up. In the process, the scientist passes out and Calvin uses the tool that was used on it to break out of its confines, a small, clear boxy chamber that serves as “Firewall 1”. Calvin escapes that first containment chamber and breaks into that of a lab rat. After consuming the poor rodent, Calvin becomes larger—and even more formidable.

To save his scientist buddy, Hugh (played well by Ariyon Bakare), Rory (Ryan Reynolds) enters Firewall 2, the lab. They get Hugh out, but Rory is sealed in when Calvin gets too close to him, due to the very realistic needs of quarantine containment. He fights Calvin with basically a makeshift blowtorch, but Calvin is still not cooperating, and climbs into Rory’s mouth.

Yeah, that doesn’t go well for Rory. After consuming a good portion of Rory the engineer’s innards, Calvin becomes even larger and smarter.

Calvin escapes into the duct system that runs web-like throughout the ISS of the (near) future.

And With That We Are Off To The Races.

There is a lot to like here, no question. It has all the hallmarks of a great SF/H film—highly questionable decisions by otherwise highly intelligent characters, gory kills, noble-sacrifice-to-save-the-others deaths/kills, a great Sci-Fi setting, strong performances for the most part, and a suitably Fucked Up Ending. So, why am I having trouble deciding if I liked it?

It’s very well put together. High production values. Cinematography is great in general. Sets. Shots of the station in orbit out through viewing portals and one sequence where a character has to go out in a spacesuit are very well done. That scene was also one of the best kills—almost too obviously framed to be nightmarish, but appropriately so. Calvin latches onto her suit while she’s doing an EVA walk to check the failing communications system. It punctures her suit’s coolant system and she dies one of the mentioned noble deaths, drowning in a suit designed to keep her breathing, because she knew if they let her in to save her, Calvin would come back in too. It’s a very effective scene. Sadly, though, as is common in this kind of bleak survival setup, her sacrifice is ultimately in vain.

Cowboy Bebop references aside, I really enjoyed how the creature was treated. It had an ever-evolving design that never lost its truly alien, extraterrestrial feel. It is said in the film that its tissues could act as neurons, muscle, photosensory, and whatever else was needed contextually. That might be a stretch, but it is an interesting idea, and that is how it interacted with its environment in real-time. It looked like something that could exist but that we have never come across. Never took on any anthropomorphic silliness in its traits or movement, which was greatly appreciated. SF/H is a big love and weakness of mine and even some of my favorites have ruined a great creature by trying to make it too animalistic, especially if it’s doing so in a way that obviously mimics an animal we are familiar with.

If you’re going for something weird, make it weird—Space Werewolves only work if you’re trying to be So-Bad-It’s-Good/Funny. Actually, wait…. No, never mind. I’m sticking with that being a silly idea….*jots down notes* totally…serious…space werewolves…idea….

Don’t get me started on the ever-increasing beastliness of the creature commonly referred to as the “xenomorph” in the Alien series. Even if you are one those unknowable/unexplained-biomech-weirdness-is-best Alien fans who thinks ALIENS forced the creatures too close to…uh…”knowability” by giving them an insect-like hive structure and queen, you have to admit he did it in a way that kept the creatures fierce but also strange. The hissing and screams were all unsettling and unearthly. This was carried into Alien³, even though it came out of an Earth-like animal (originally a bison-like creature which was restored in the assembly cut, then a dog in the theatrical cut), which was smart. Then Alien: Resurrection started the beast roar approach that got carried over into at least the first AVP. Always hated that take on it, as it took away the weirdness that was mostly retained in the second and third films.

Oh, would you look at that…. Patrick Loveland is rambling about the Alien films in a SF/H film review. Never seen that before.

In a film this beholden to at least the first film in that series, I’d say that’s fair play.

Seven “passengers” on the Nostromo (eight if you count Jones—which you should!). LIFE’s ISS has six. Extremely hostile extraterrestrial organism hunts them through tight confines of spacefaring location, growing from small to much larger as the story progresses, killing them one-by-one. Uses the location’s internal structures that humans normally wouldn’t go other than for maintenance to do so.

A simple setup, but Alien became the go-to blueprint for how you do claustrophobic SF/H films, and this film follows it closely.

Where it diverges the most for me—and in turn, does its own thing, finally—is its ending. I wouldn’t call Alien’s ending happy…but compared to LIFE’s, it’s a storybook closer. I wouldn’t say it’s at the level of something as soul-crushingly brutal and meanspirited as, say, The Mist… but it’s not at all cheery. For the record, I have a lot of respect for The Mist’s ending…but I also hate how damn bleak it is. But I also love that—yargle-blarp! Harumph!

But for those who love a bleak, not-at-all-happy kind of ending to a Sci-Fi/Horror film, this will not disappoint.

Okay, so…I guess all around after searching myself, I actually did enjoy this film. I’d say my only real issue is that a classic like Alien (yes, I typed that One More Time) feels ultimately like something almost transcendent, somehow greater than the sum of its parts. LIFE is a worthy effort that never gets near that lofty state.

Definitely a project that was well-planned and constructed, with plenty of grisly moments and thrills, and strong performances overall. Tied up with a charcoal gray bow of a bleak ending. 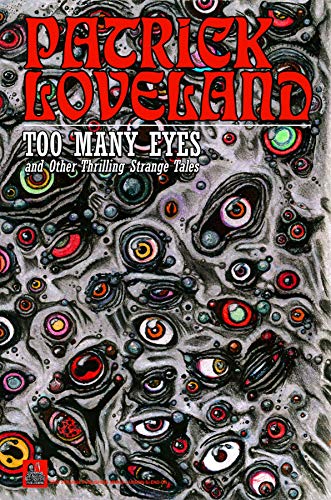 “TOO MANY EYES IS A COLLECTION OF PULPY, VISCERAL SHORT STORIES THAT TAKE YOU FROM THE OLD WEIRD WEST ALL THE WAY TO THE DISTANT FUTURE AND IT’S SURE TO GIVE YOU THRILLS AND CHILLS!”