My Review-ish: For those who aren’t aware 10 Cloverfield Lane is a sequel to JJ Abrams cult classic Cloverfield (2008). However, it isn’t the sort of sequel anyone is used to seeing. It’s more of a sister film or companion film rather than an actual sequel. This is a concept I think is pretty damn cool. Also, since I’m not really a fan of Cloverfield I’m happy this sequel is a completely different type of film. Where Cloverfield is basically a found-footage type of film, 10 Cloverfield Lane is a full on psychological thriller and one of the best ever at that. Now I have a couple issues with this movie that I’ll get to at the end but for now let’s concentrate on the positives. 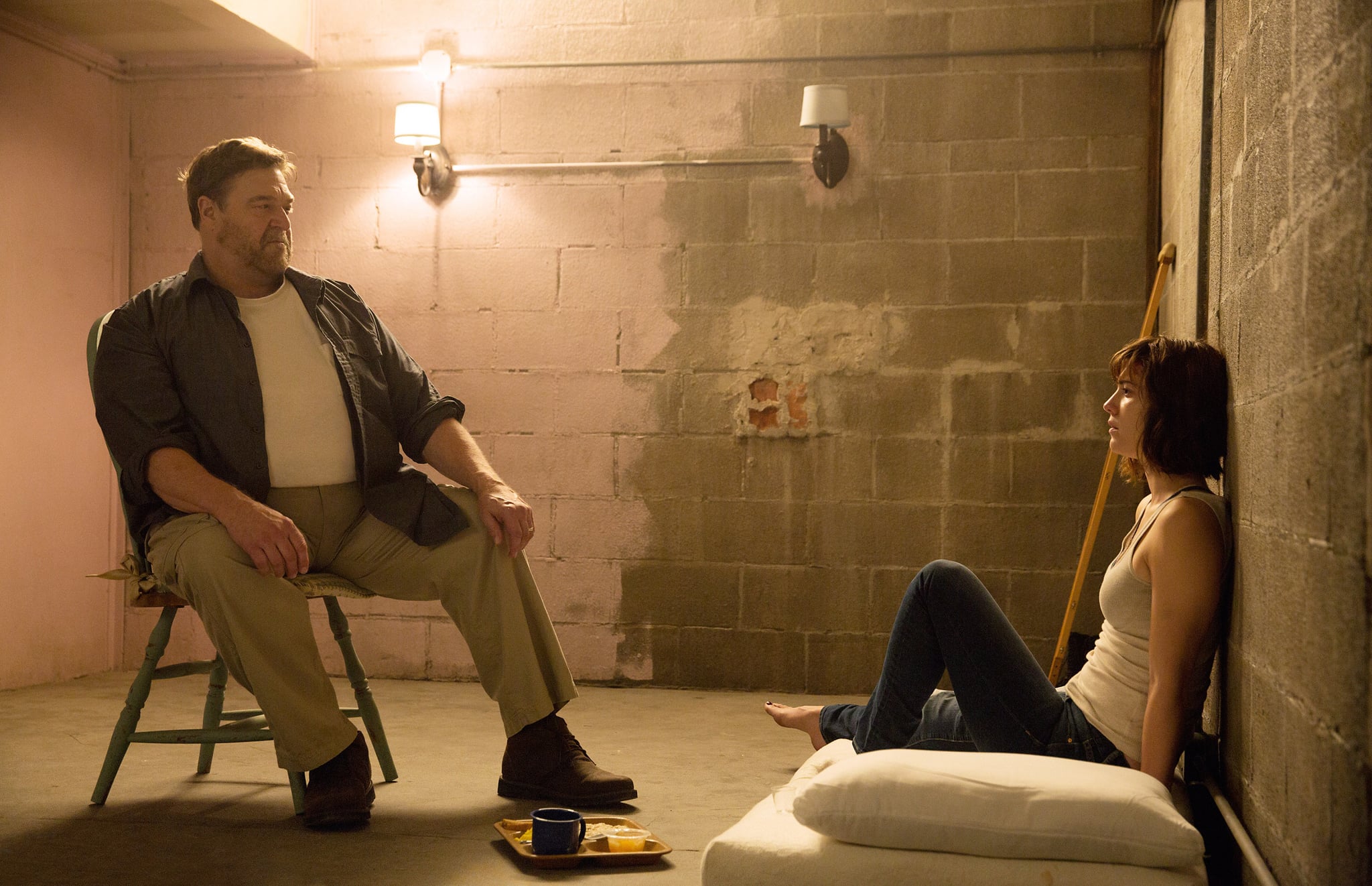 For starters, it is impossible to talk about 10 Cloverfield Lane without stating up front that this is basically The John Goodman Show. If Goodman wasn’t as awesome as he is in this film then the whole thing may pretty much fall apart and be terrible. Goodman gives a great performance which lifts the other actors up or, at least, props them up. Goodman plays Howard who turns out to be the nutty survivalist who built a bunker for the apocalypse only now the apocalypse has arrived and you’re glad he exists. Howard has social skills that alternate between rattlesnake and child trying to get mommy & daddy’s attention which, go figure, tends to be off-putting to those around him.

So, Michelle (Elizabeth Winstead) decides to leave her boyfriend but while driving away, to I don’t think she even knows where, gets in an accident. She regains consciousness to find herself chained to a bed and locked in a room in Howard’s bunker. When Howard appears he tells her that he rescued her after her crash, the end of the world has begun outside and he has locked her in the room for her own protection. Like any normal person Michelle doesn’t believe a word Howard says believing instead that she has been kidnapped by some psycho who will likely rape and kill her because isn’t that what any young woman would think in this situation? When she is finally able to leave the room she finds Emmet (John Gallagher Jr) who she assumes Howard also kidnapped. Emmet explains to her that Howard actually told her the truth about what is happening outside and that he came to the bunker because he knew Howard had this doomsday shelter. Emmet tells her that yes, Howard is kind of a weirdo but they are lucky to be there because the air outside is poisonous. Michelle is still skeptical but Emmet does ease her mind about Howard’s intentions.

It doesn’t take long for Michelle to devise a plan to try and escape. She manages to steal Howard’s keys making a run for the outside door. Once there she sees a woman clearly infected by the air outside finally proving to her that Howard wasn’t lying about the outside world now being toxic. She still doesn’t want to be trapped in the bunker with weird Howard but she is stuck. The trio try to make the best of it but Michelle and Emmet slowly discover that Howard may be more than just a weirdo survivalist. Michelle begins to suspect that Howard may have brought other women here for nefarious purposes. I won’t spoil the film more than this, you’ll have to watch it if you want the answers.

Now for the negative and believe me the positives more than make up for this negative. The negative for me is the tie-in to the first Cloverfield movie. Apparently there has actually been an alien invasion which Michelle discovers in the final act of the movie. Michelle devises a way to go into the outside world where she has to evade some sort of hunter-killer space ship. She manages to bring one down which I found a little far-fetched, but whatever, then later drives away. Up to the ending 10 Cloverfield Lane is a very well contained psychological thriller made fantastic by the performance of John Goodman but completely shifts gears in the final act or the final 15-20 minutes of the film. I understand why the film ended this way but it would have been a far better movie if it had remained contained inside the bunker. It almost feels like the end was tacked on just to tie it into the first film which I didn’t find necessary. The title alone ties the movies together and nothing else was really needed but this is the film we are presented with. I think it’s a better movie if you just hit “stop” and skip the final few minutes.

In the end 10 Cloverfield Lane is one of the best psychological thrillers you will ever see and I’ll judge it on that basis despite the ending which honestly, I hated. Unfortunately, I can’t ignore that the ending exists so instead of this film being a perfect 10 out of 10 I have to knock it down to at least 9 out of 10 stars and honestly I hate the ending so much it really knocks it down to about an 8 overall. What can I say, they didn’t write the movie to satisfy me personally so it is what it is. Perhaps you’ll enjoy the ending but I would have preferred if they would have left Michelle trapped in the bunker but I also like bleak, no hope endings and the ending does provide hope for those who favor “happy endings”. I still highly recommend this film and feel free to tell me how wrong I am about what I find to be an atrocious ending or tell me you agree. It’s your life so live it your way!