The Gist: A biologist’s husband returns one year after leaving on a Top Secret mission but is not the same man who left. Government officials take the couple into custody where the biologist learns of a mysterious zone her husband was sent to explore and returned as the sole survivor. In order to find out what happened to her husband the biologist enters the zone with a team of her own where no one knows what they will find.

My Review-ish: Well do you like a film that makes you think? If you answered no then you’ll probably wanna skip this one. Now go put your helmet back on and find your safe place while the adults discuss cool things. Oh, and wipe that drool off your chin. Yes, I’m kidding. I know not everyone enjoys watching films that force you to think about abstract ideas but I do. The cool thing with Annihilation is that it makes you think while also providing some pretty cool action and adventure along with a couple of true monsters! So what kind of movie is Annihilation? Well it’s a drama, a thriller, a mystery, an action movie, an adventure, a horror movie, a sci-fi movie and probably a few more things if I think about it a little longer. Unlike other films or stories that touch on numerous genres, Annihilation does it without feeling like a completely jumbled up mess. I also have a small disclosure so my bias is right up front, Natalie Portman is one of my very few celebrity crushes so I probably enjoyed this movie a little more based on that face alone. Now let’s talk about Annihilation for a hot minute. 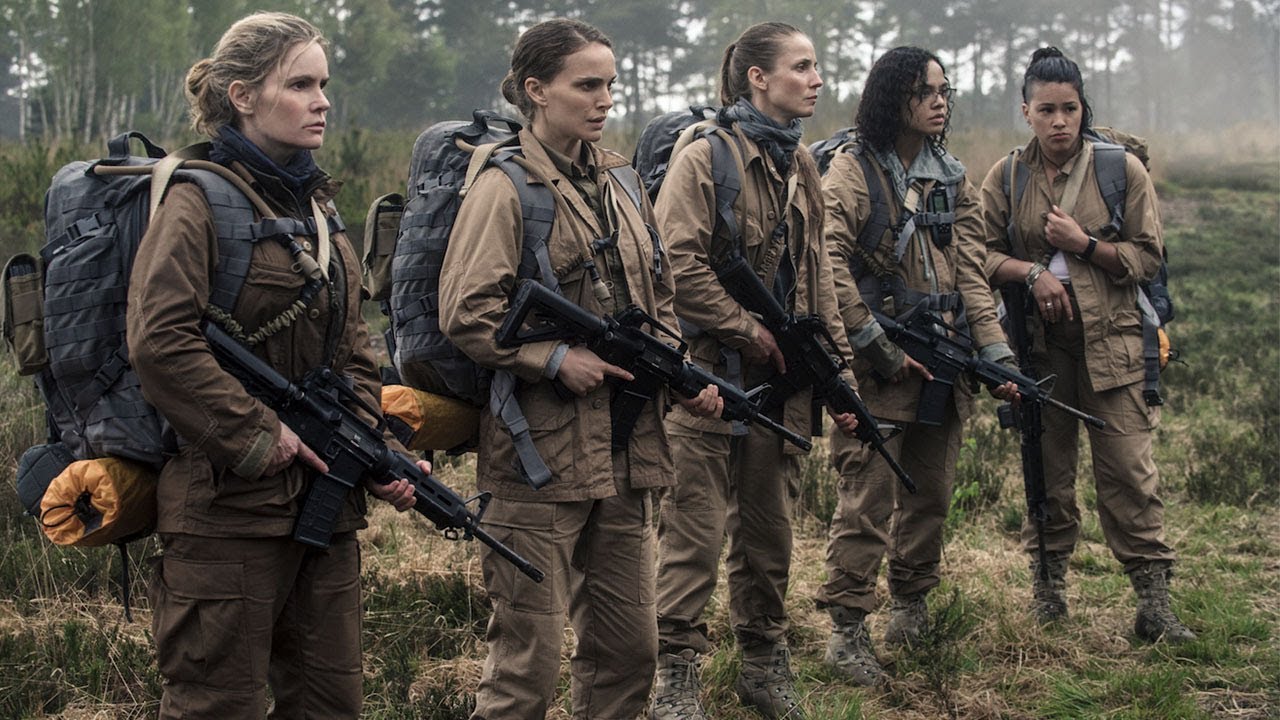 Let’s look at the personal story aspect for a moment first. Annhiliation starts with Lena (Natalie Portman) who seems pretty much like a lost soul then through flashbacks we see that she is married to Kane (Oscar Isaac). In flashbacks they seem like a pretty happy couple so naturally you assume that the pair either divorced or Kane died somehow. Before long you realize neither is the case though it’s possible that Kane is dead. It slowly unfolds that Kane is in the military and went away on a Top Secret mission, one he didn’t return from. Out of the blue, a year after he disappeared Kane suddenly returns one evening apparently with no memory of where he had been or how he got home. Before Lena (or us, the audience) can get any answers, the couple is picked up and taken away to a military base. This is where we begin to learn what is going on.

Once at the base Lena meets Dr. Ventress (Jennifer Jason Leigh) who assesses and debriefs Lena. Soon it is obvious that Lena knows nothing about where her husband was or how he returned though it is obvious to Lena and everyone else that Kane is very different from the man who left. Then Dr. Ventress shows Lena where Kane and his Special Forces team were sent. A mysterious rainbow wall dubbed “The Shimmer” has appeared and is expanding only no one knows what it is, where it came from or whether it is dangerous or not. All Dr. Ventress or anyone knows about The Shimmer is that everyone who enters doesn’t return, that is until Kane. As a scientist and wife Lena insists on entering The Shimmer to find out what it is and what happened to her husband who seems to be dying now that he has returned.

An all-female team is sent into The Shimmer and we’re finally introduced to a fantasy/sci-fi land that looks similar and foreign in equal measure. It doesn’t take long for the team to start noticing strange vegetation as they make their way further away from the shimmering rainbow wall separating their world from the one they just entered. The further they go the stranger things appear until they reach the edge of a lake with a cottage overgrown with vegetation. This is where we learn these ladies aren’t in Kansas anymore. The fairly slow pace of the movie to this point changes drastically when the team has to fight off what appears to be a giant mutated or alien alligator. The beast is nearly impossible to take down even with the firepower they have and then the questions start for them and for us, the audience.

The more you learn in this film the more your mind starts to race with “what if” type questions along with the question my mind goes to “are we, meaning humans, the best nature can do?” The mysterious shimmer zone in Annihilation is a zone where evolution seems to be accelerating causing what we see as mutations to the plants and animals. The entire zone seems to have started at a lighthouse which is at the center of the shimmer zone that the team needs to reach in order to see what started it all. Is the origin alien or is it something else? The closer Lena travels to the lighthouse the more warped reality seems to be. Once she arrives at the center of it all everything she thought she knew is shattered. I refuse to spoil anything about this movie so if you’re intrigued you’re just gonna have to watch the damn thing!

Annihilation forces you to think about the possibility of alien life but in a way you probably never did before. This film doesn’t just force you to think “do aliens exist” nor is it some alien invasion fantasy like War of the Worlds or Independence Day which answers that from the outset. Scientists today can and do contemplate terraforming alien worlds to be habitable to humans but what if we terraformed a planet that was already inhabited by life? What if an advanced alien civilization didn’t want to merely change the air to make it habitable for them but essentially terraformed us into them? Is what is happening in Annihilation an alien “attack” or is this an alien race trying to help us evolve enough to stop destroying our own planet? Is The Shimmer even alien based? These are just some of the questions Annihilation raises and I’m probably only scratching the surface on the questions you’ll have after watching it. So go watch it already!

Now, I have to tell you I left out an absolute f**kton so that I didn’t ruin this movie for anyone who has not seen it. I absolutely love movies like this. I love movies that make you think. I love movies that present you with questions you never even thought to ask. That’s me, I love stuff like this. I watched this one a second time with my lady who does not really enjoy films like this. She likes to simply be entertained by a movie. She doesn’t like a movie that forces her to think about things when she just wants to relax and watch a movie. That said she enjoyed the action in this movie which is, honestly, pretty damn good. I got to the end of this movie and wanted to applaud, she got to the end of this movie with a giant WTF! I can’t see how anyone would have a reaction in between those two. If you love movies that make you think and contemplate then I think you’ll love this as much as I did. If you want a movie that lets you shut off your brain so you can forget the reality of our shitty existences for a couple hours then this one may not totally be for you but you can still have some fun with the monsters in it. 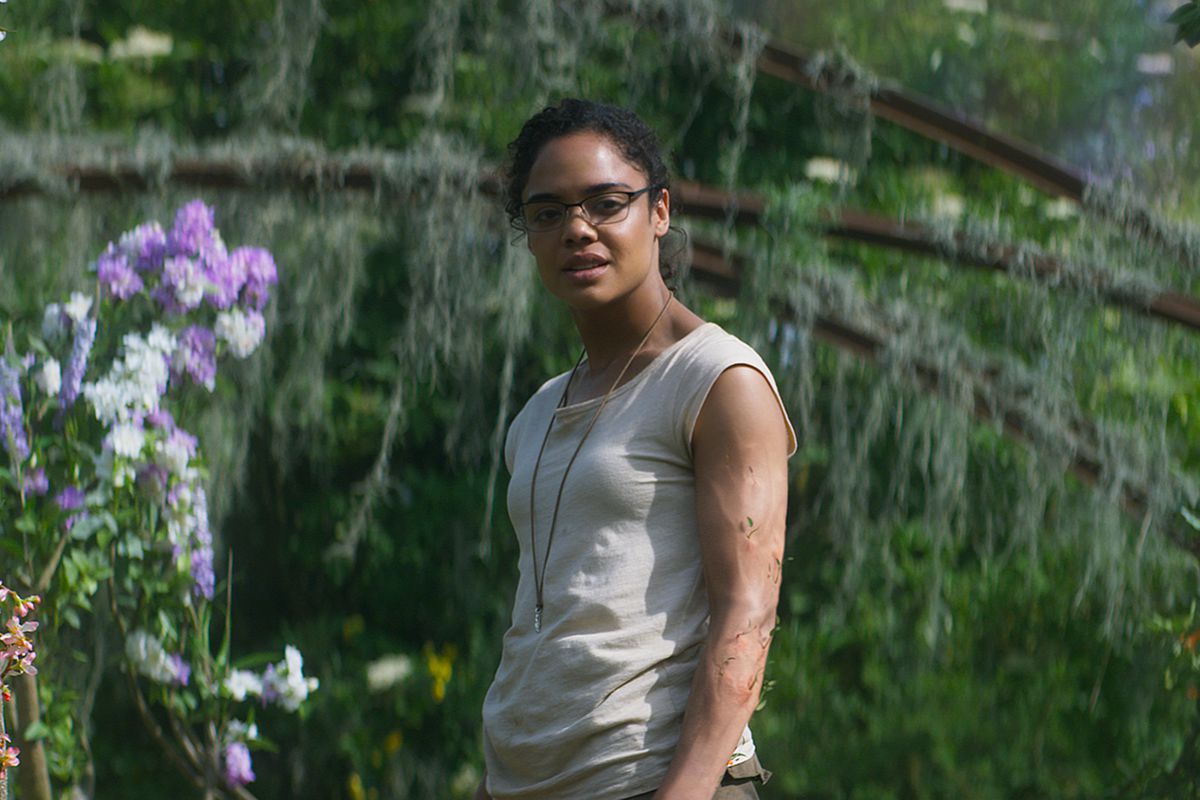 The Verdict: For me Annihilation is probably a 9.5 out of 10 but I’m into weird shit. If you’re like my lady and just want a movie to entertain you for a couple hours then it’s probably only about a 6.5 or 7 out of 10 for you. I truly loved Annihilation and it’s also a film that you can view multiple times and catch little things that you maybe missed the first time as well as think of some more questions to ask yourself. That’s a good thing in my book.