Synopsis: “A teenage boy and his friends face off against a mysterious grave robber known only as the Tall Man, who keeps a lethal arsenal of terrible weapons with him” -IMDb.

When thinking about cosmic horror one begins to formulate a list of criteria on how to judge what exactly is “cosmic horror.” Immediately the name H.P. Lovecraft will surface. In fact, most of how we understand “cosmic horror” is from his collected works. The emphasis typically negates shock horror or gore horror in favor for fear of the unknown. The phenomena we are confronted with goes beyond our comprehension. The word cosmic here then implies that the confrontation in the story extends beyond our narrow human understanding and stretches into a “cosmic significance,” that is, otherworldly. Phantasm (1979), while categorized as more of a fantasy horror, actually represents aspects one would find in a traditional cosmic horror tale, such as an antagonist that could only be describes as simply otherworldly, a story driven by madness, a nightmarish dreamscape, and of course, most importantly, fear of the unknown.

Written, directed, and edited by Don Coscarelli, a fellow known for his bizarre movies, Phantasm has been described as “dream-like,” “surreal,” and “imaginative.” I would of course describe Phantasm as a completely freaking strange. Phantasm was widely accepted upon its initial release in 1979, but since has become a popular cult classic among horror fans. Enough at least to procure four additional sequels, including Phantasm II, part III :Lord of the Dead, part IV: Oblivion, and Ravager–released in 2016.

The film opens at Morningside Cemetery, where Tommy (played briefly by Bill Cone) is having a grand ole time with an attractive young lady by the name of “Lady in Lavender,” (played by Kathy Lester) who we discover later to be the Tall Man’s (played by late great Angus Scrimm) alter ego (yeah, like I said, strange movie). During their frolic amongst the tombstones, the Lady in Lavender kills Tommy. The story fast forwards to Tommy’s funeral where childhood friends, Jody and Reggie, believe Tommy had committed suicide. During the service, Mike (played by A. Michael Baldwin), Jody’s younger brother, cuts across the graveyard to “spy” on the funeral. Apparently Jody and Mike’s parents had recently passed away and Jody is worried about taking Mike to the funeral. 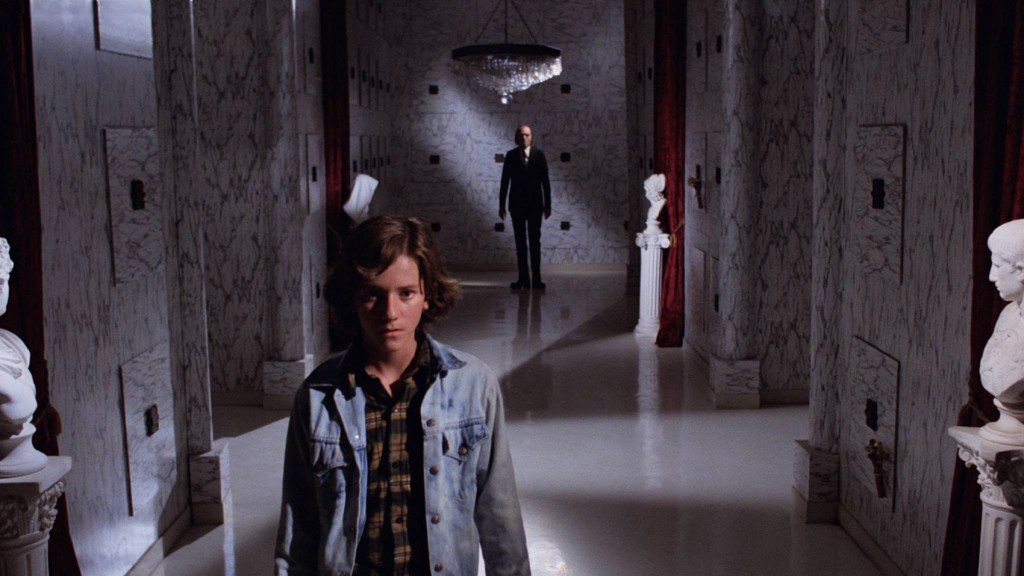 While spying, Mike observes the Tall Man, who is the undertaker at Morningside Cemetery, as the guests have all departed, lift the entire casket by himself and deposit it back into his hearse. I doubt many here have ever served as a pallbearer, but caskets can weigh up to 500 lbs., easy. Mike rushes back home and tells his big brother, but of course Jody thinks he’s just telling tales. Apparently, Mike has been acting a little clingy since their folks died. He’s got this idea that big brother Jody is going to take off and leave him behind. If this is really Jody’s plan or not, Mike keeps to him like glue. The next night he follows Jody from a local bar out to Morningside Cemetery. Seems big bro picked up a hot date, a certain Lady in Lavender. As they cruise past second base near the spot Tommy had been murdered, while hiding and keeping an eye on Jody, Mike encounters…well…a goblin of sorts and is chased away.

Jody discovers that once again Mike has been following him. He doesn’t believe a word of what Mike is telling him. Frustrated, Mike investigates the mausoleum, a large mansion looking funeral home beside the graveyard. Inside he encounters more of that strange we’ve been talking about. Zipping through the air, a large silver ball acts as a sort of security device. As Mike is found sneaking around, the silver ball launches at him, large drill like spikes protrude from the device, but impales one of his pursuers instead. Mike narrowly escapes, and he has a souvenir, the Tall Man’s finger–which BTW is still moving. 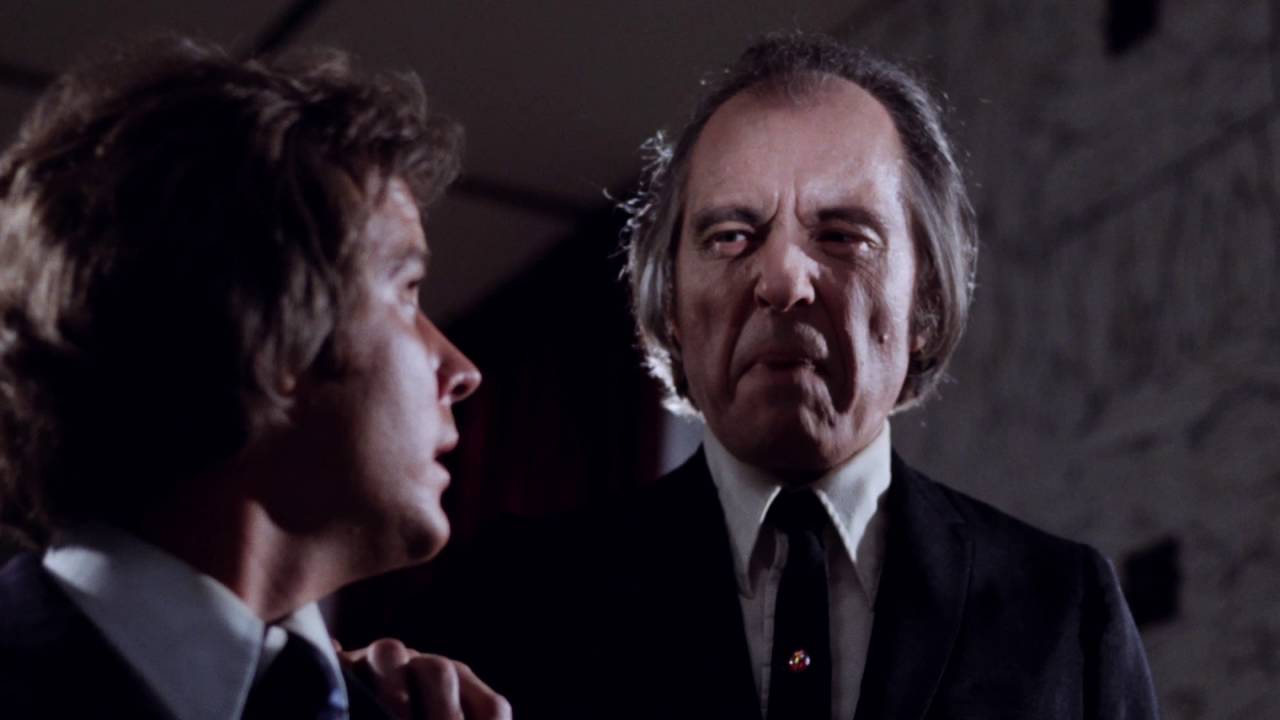 Confronted with this piece of evidence and Mike’s bizarre story, Jody begins to accept that something strange in going on up at Morningside Cemetery. And when the finger suddenly changes into a giant fly and attacks them, Reggie also joins the fight. Wanting to know more, Jody goes off on his own to investigate Morningside, but he is quickly driven off my those goblin dwarf growling hooded creatures. The Tall Man’s hearse nearly runs him down, but Mike shows up in Jody’s sweet sweet 1970 Plymouth Barracuda. Together they are able to run the hearse off the road. Stopping, they discover that Tommy, now shrunken down and looking like a hooded goblin, was driving the car. This of course begs the question, just what are they doing up there at Morningside Cemetery?

Phantasm has a very surreal dream-like vibe going on that completely sucks you into the story. Its often difficult to tell what is a dream and what is actually occurring. In fact the ending, which I won’t spoil here, forcing audiences to ask that very question. I can see how this movie would be a tough swallow for a younger horror audiences, yet at the same time I can certainly see how Phantasm has garnered a cult following. The theme of death and the uncertainty of the afterlife play big parts in the story. And the crux of the story centers on an adolescent character. Phantasm is a near perfect depiction of the emotions and insecurities and fears that adolescents may go through in the event of something as traumatic as death and mourning, especially among immediate family members, such as a mother, father, or siblings. Personally, I don’t much else gets as “cosmic” as the notion and uncertainty as death. 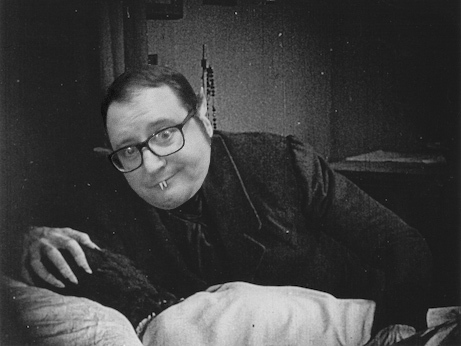 Thomas S. Flowers is an Operation Iraqi Freedom and Enduring Freedom Army veteran who loves scary movies, BBQ, and coffee. Ever since reading Remarque’s “All Quiet on the Western Front” and Stephen King’s “Salem’s Lot” he has inspired to write deeply disturbing things that relate to war and horror, from the paranormal to his gory zombie infested PLANET of the DEAD series, to even his recent dabbling of vampiric flirtation in The Last Hellfighter readers can expect to find complex characters, rich historical settings, and mind-altering horror. Thomas is also the senior editor at Machine Mean, a horror movie and book review site that hosts contributors in the horror and science fiction genre.

PLANET of the DEAD and The Last Hellfighter are best-sellers on Amazon’s Top 100 lists for Apocalyptic Fiction and African American Horror. 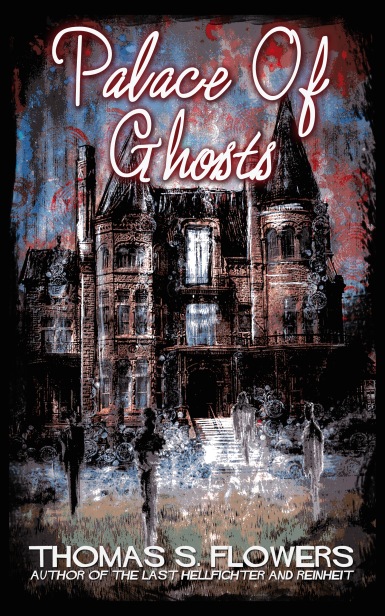 “This is a haunted house story on steroids” -Amazon Reviewer.

“This author uses vivid imagery in his novels and this one is no exception. For me, it was an interesting read in that the author was exploring an experimental treatment for PTSD. So much needs to be explored and put into practice in this field for our returning veterans” -Amazon Top 10 Reviewer. 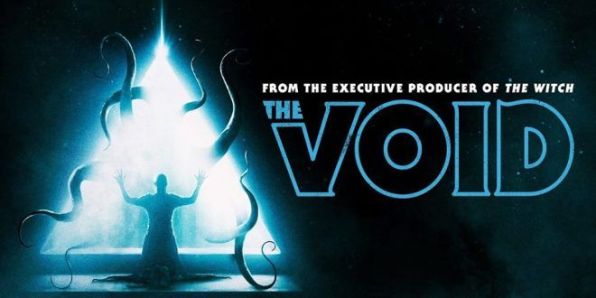