The Gist: At the end of WWII Professor “Broom” leads a platoon to thwart Nazi attempts to open a portal to another dimension unleashing ancient evil. Instead Hellboy enters our world raised by Broom to fight evil. When Rasputin returns from the dead Hellboy must choose between mankind and his destiny as the harbinger of hell.

My Review-ish: For starters today I’ll say if you have, for some reason, not seen Hellboy then stop reading this and go correct that egregious error! I remember going to see this film back in 2004 and being absolutely blown away by this movie. Guillermo del Toro really outdid himself with this fantastic piece of cinema. Sure the total comic nerds out there can scream about all the things that were changed from the source material but I say who cares? This is just a fun time from start to finish. It was also the best comic to movie adaptation until the Marvel films starting kicking it into high gear in the past few years. When Hellboy debuted there had only been a few superhero films made and most of those were mediocre and pretty much no one other than extreme comic nerds had ever even heard of Hellboy or Dark Horse Comics for that matter.

So what is Hellboy all about? First, this is an origin story of sorts but del Toro takes care of the origin in the first 10 or 15 minutes of the film introducing you to pretty much all the key characters. It’s toward the end of WWII and Hitler’s Nazi are trying to find any way possible to prevent their inevitable defeat. Hitler is obsessed with the occult, something that is actually true not just something for the comic/movie, and has enlisted some nefarious individuals in that regard including Rasputin and an odd assassin named Karl Ruprecht Kroenen. When the film opens Professor “Broom” has teamed with an American platoon to find out what the Nazis are up to only to stumble upon Rasputin attempting to open a portal to hell unleashing an ancient evil that will destroy mankind. Broom and company are able to stop the worst case scenario but the portal opens long enough for something to make it through from the other side. That something is… Hellboy. 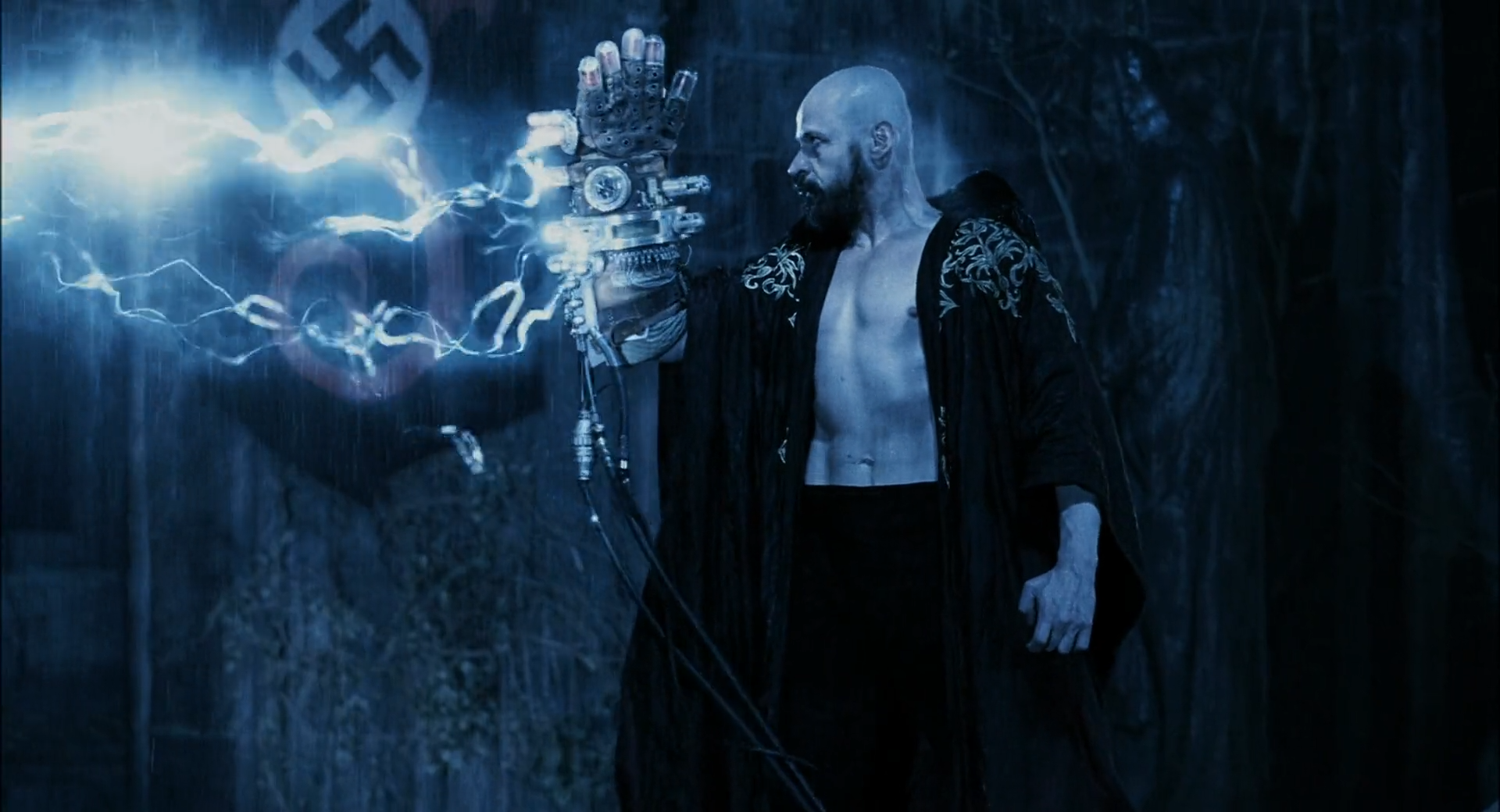 Skip ahead to modern day and Hellboy is all grown up, raised by Broom, and is being used by our government to fight against the things that go bump in the night. We learn through the eyes of John Myers (Rupert Evans), a new recruit being brought in to take over for an aged (and dying) Broom, that Hellboy is part of a team fighting the paranormal along with a fish man named Abe Sapien and a “firestarter” named Liz Sherman. Hellboy is in love with Liz but she’s gone all mental because she struggles to control her fire power which has killed people unintentionally. Meanwhile, Hellboy longs to be out of the shadows and in the spotlight because he believes what he does should make him celebrated like a rock star not hidden away like some dirty little secret. He takes any and every opportunity to be in the spotlight when possible much to the chagrin of Broom and his government handlers.

Rasputin and Kroenen return unleashing an ancient evil called Sammael which is essentially a giant demon dog. Unfortunately every time one is killed two new ones arise to take its place, something Hellboy and crew learn the hard way. Meanwhile, Kroenen fakes his death to get on the inside of the BPRD (Bureau for Paranormal Research and Defense). While Hellboy attempts to break up a date between Liz and John by sneaking out (again), Rasputin appears to Broom showing him a vision of Hellboy as the means to the destruction of the world. Broom tells Rasputin he will only ever see Hellboy as his son for which Rasputin instructs Kroenen to give Broom a quick death. Hellboy returns to find Broom dead insisting the BPRD go after Rasputin.

Rasputin is traced to an old cemetery outside Moscow and the team is off unaware that it’s a trap. In the end Rasputin attempts to use Hellboy to permanently open a gateway to hell unleashing what is known as the Ogdru Jahad which are supposed to be ancient evil creatures that will destroy the world and everyone in it. The Ogdru Jahad, to me, are a play on Lovecraft’s “elder gods” though I have never heard del Toro indicate that exactly. In a final attempt to bend Hellboy to his will Rasputin steals the soul of Liz Sherman forcing Hellboy to destroy him once and for all. The end battle is pretty fantastic!

I’m leaving out a ton and over-summarizing most because I don’t want to ruin the movie if you have never seen it. You need to see it! Guillermo del Toro took comic adaptation to a whole other level in this film that few others have been able to achieve before or since. Yes, there were changes from the comic but those changes were made with the blessing and help of Hellboy creator, Mike Mignola and they were done to make Hellboy a better film. Rather than ignore what was working during filming, del Toro accentuated it. The character of Professor Broom was supposed to be small, almost non-existent but John Hurt did such a fantastic job that the part was extended.

Few filmmakers are smart enough to recognize this or have the guts to change their own script when something is working better. Hellboy is a unique character brought to life expertly by Perlman and given a great story by del Toro. You don’t need to be a comic fan to love this film, you just need to enjoy good action movies. For us horror fans Hellboy was the first film to cross superheroes with paranormal and the occult and hopefully it won’t be the last. On a side note… even though just about everyone shit on the latest Hellboy movie because del Toro and Perlman were left behind I actually found it quite good and fun in its own way. If you can get over the lack of del Toro and Perlman then you’ll enjoy that one too.

Welcome to this years Fright Fest!!!