There’s one thing you can say with certainty about the (current) trilogy of Cloverfield films; they aren’t trying to copy each other. So far, we’ve had found footage and monsters in Cloverfield, with human ‘monsters’ and the claustrophobia of 10 Cloverfield Lane. I’m not going into my thoughts in those films, because people have beaten me to them already! Read the last couple of days reviews right here and here if you missed them. I will say this though, I enjoyed both of them.

So it was with some trepidation I approached Cloverfield Paradox. You know when you find a franchise you like, they bring out a new film and you’re worried about watching it in case it messes up what’s gone before? That’s what took me so long to watch this and why I jumped at the chance when Mr Flowers put up his list for Fright Fest 2019.

The general setup is that the planet is facing an energy crisis that threatens to escalate into global war. A group of plucky scientists are on a space station called Cloverfield, testing a device snappily named the Shepard Particle Accelerator, which they hope will produce unlimited power that will save the day, HUZZAH! Think of the Large Hadron-Collider, but in space and there you go.

All sounds pretty cool so far, however, some of the things which really niggled me about this film are introduced quite quickly. For one, you have scientists from around the world, yet they fall into their usual country stereotypes. You know from the instant you see the Russian that he’s gonna do something dodgy, that the German can’t really be trusted (or can he?), the Chinese person will be the main boffin, and the American captain will hold everyone together with patriotic pride and duty. We’re in 2019 and still we’re being given these characters. Fine. Let’s get past that and onto my next bugbear.

The name of the film…we’re quickly informed by a convenient TV show segment running on the space station (hmm) that in the process of trying to make the accelerator work, they could cause a cataclysm, possibly even open a portal to other dimensions which may include demons and/or monsters, GASP! This plot device is nothing new, and I’ve got nothing against it at all. Shit, the way this film ties into the other two (particularly the ending) is really well done. What does irk me, is how it’s shoehorned in. I know that filmmakers kinda have to spell some stuff out to people, but why not try and treat the audience as if they have a modicum of intelligence? There are much better ways of introducing this notion than the ham-fisted way they did. 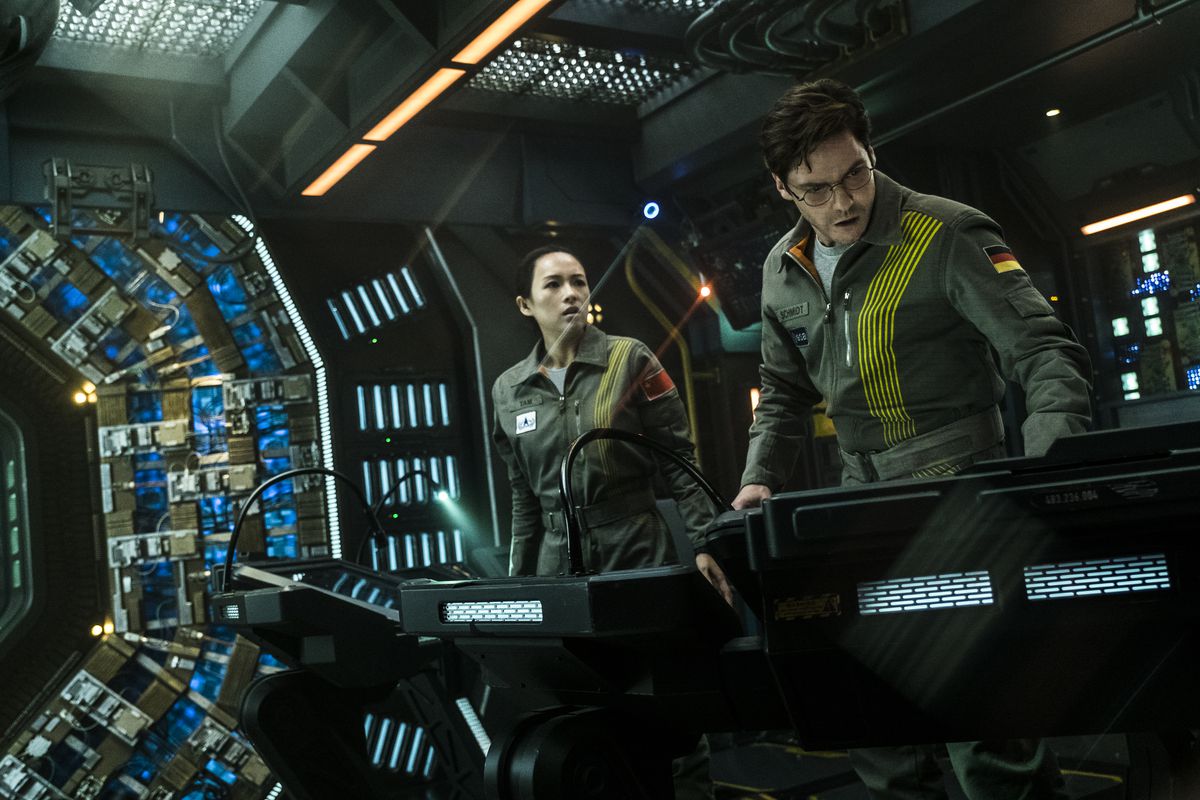 Anyway, getting the beam to work is not plain sailing and time ticks by. As they begin to lose hope they finally manage to get the machine working, but at the point of celebration it goes haywire and BOOM, something is very wrong. After discovering that they’re no longer in Kentucky (that’s a Cloverfield Paradox joke), weird shit begins to happen. This segment of the film is what landed really well for me.

They hear a screaming, and track it down to a wall panel. After a brief conflab, they decide that they better take it off to have a look, I mean, what harm is in that? I’m sat there expecting one of the Cloverfield subway dog things to jump out and take someone’s face off, instead they find a woman trapped within the wall. Not tucked away neatly, oh no, as in she has cables and supports going right through her. Now THAT is one helluva moment, harks back to some of the Saw awakenings, where you wonder how they are going to get them out.

By now, the Russian is messing around with his eye (smashing moment when it flips to the side), the Irish engineer has discovered that the crew’s worms have all gone missing, but most of all the captain’s mantra is, LET’S NOT PANIC JUST YET. Right up until the Russian 3D prints his own gun and goes to shoot the German because of how events on earth are panning out. This leads nicely up to the second jolt of the film. The Russian is laid low before he can fire a shot by a seizure. It was only when he started vomiting blood, that I realised what would happen next, and where the worms had gotten to. Sure enough, worm volcano erupts and it’s as wonderfully disgusting as you’d think.

Then…the film kinda loses its way a little. Okay, a lot. It feels like they’ve realised that they can either make it like Event Horizon, or try and make their own animal, without ever really settling on something in-between.

Example in point is where Chris O’Dowd’s arm gets sucked into a wall. Sweet! They’re really going to play up this dimension-mangling angle I thought. Then his arm rocks up a la Evil Dead. Okay…an odd choice, but cool. The arm them tells the crew through the medium of writing to look inside of the dead Russian, where they discover the gyroscope which basically makes the space station work.

The arm knew that.

Like how? If my arm could talk, I’m sure it would love to rat me out on things, but come on! It isn’t going to tell the authorities where Jimmy Hoffa is buried.

This finding shows them that earth is still there, just bloomin’ miles away. But wait a minute, they can suddenly communicate with them again. In the process they hear a news report which tells of a very different earth, a planet in war, where the Cloverfield Station they sent up, the one that the behind-the-wall woman comes from, has blown up and crashed. That’s when they finally work out that they’re shifted dimensions, and the only way to go back is to fire the beam up again, as that’ll definitely work. 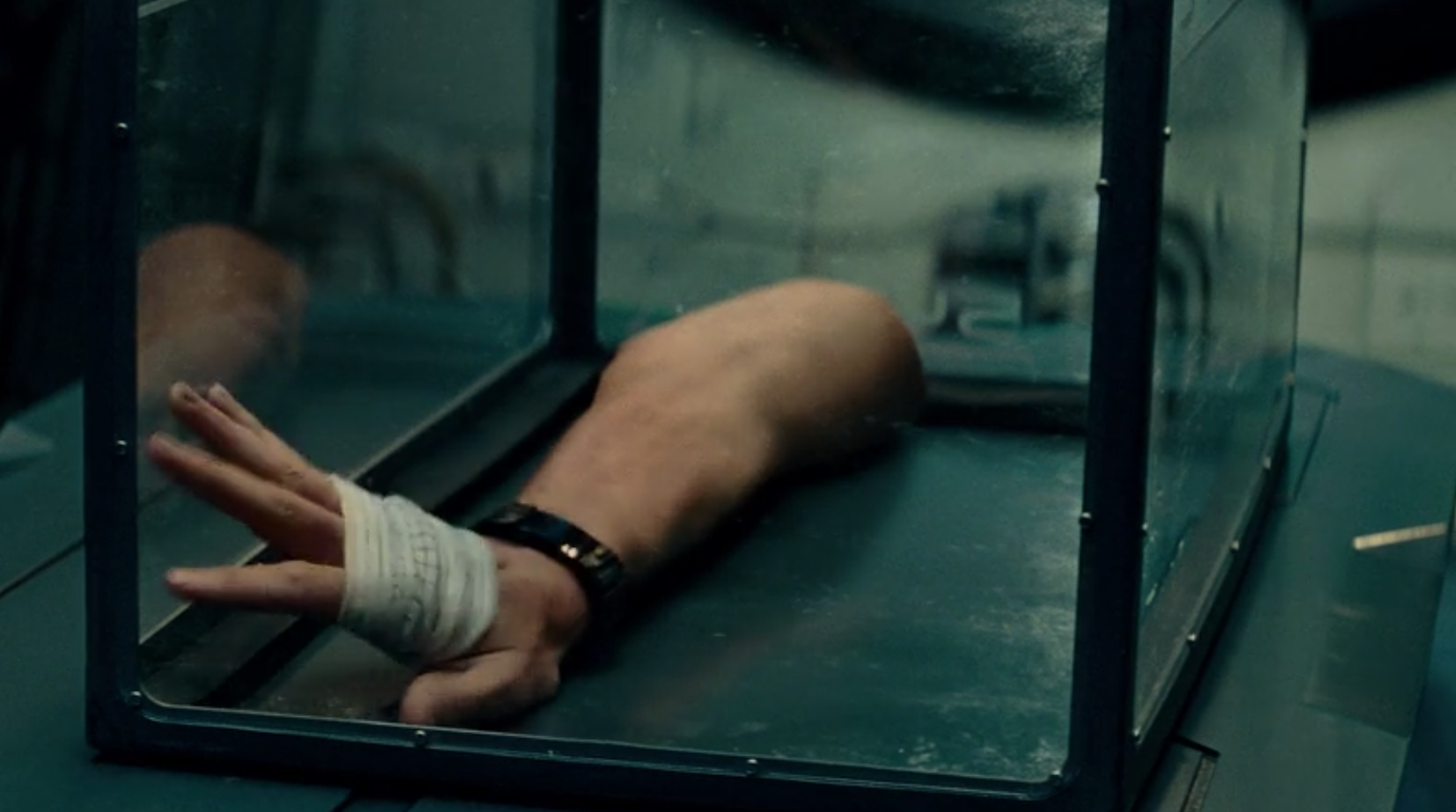 Little side note here, that kind of trick never works and is stupid. I once dropped my Action Force Apache helicopter on the floor and the landing skid broke. To try and rectify it, I recreated the drop and surprisingly made it worse. I was eight years old when I figured out that doing the same thing again that messed something up in the first place, is not the best of ideas, but hey! I’m not in a film I guess. Or am I?

One of the sub plots is around the main character Hamilton’s motivations. Turns out she inadvertently killed her kids in a house fire, and naturally, in this dimension, courtesy of confirmation by behind-the-wall lady, they’re alive, rejoice! So naturally, she decides that she wants to stay in this dimension and see them, BECAUSE THAT WILL WORK OUT REALLY WELL WON’T IT? Let’s not even get into the minutiae of quantum mechanics, rather ask the obvious question, what’s she going to do? Try to convince her other self to let her have custody on alternate weekends? Every other Christmas? Perhaps she could live in the basement, and be underground-mommy? Either way, this is where I went Russian and got a bit eye-rolly.

I haven’t even touched on the other story where her husband back on earth number 1 is living through what he thinks is a foreign country attacking, but we all know what it is, huh? *insert winking emoji* He even ends up in a familiar looking shelter. *insert winking emoji again*

Anyway, the Chinese woman figures out what’s been causing the problems with the beam all along, turns out they needed to open the equivalent of the windows to let condensation out. Basically, it turns out that firing the particle accelerator beam is like having a shower in a closed room, and wondering why they’re getting mould. Unfortunately, whilst they test her plan she gets flash-frozen. WHY WON’T THEY GET A BREAK! They then reckon they need behind-the-wall woman to help them get everything ready for the beam firing, which will unfuck my Apache helicopter, and she’ll then take the data and jet on back to her earth with underground-mommy and the remainder of the crew will go back to their own dimension. Simples.

Except behind-the-wall woman has a secret agenda and doesn’t want the data, but the space station itself! GASP! So she decides to off everyone, head home and take the credit for saving up her messed up world. In a really rubbish fight sequence, good prevails over evil, and behind-the-wall woman get sucked into space arse-first, because what sci-fi film is complete without someone floating around in space?

The two survivors flick the switch and WHOOSH, end up back in their own dimension, orbiting earth again in a stroke of remarkable luck. As Hamilton’s husband is told the good news, he implores Mission Control to make sure that his wife doesn’t come back to earth, cos, ya know, GIANT FUCK-OFF MONSTERS, but it’s too late! TOO LATE I TELL YOU. Her escape pod careens through the clouds just as one of the giant Cloverfield monsters comes up for air.

Awww, ain’t that nice? And in no way does it set it all up for another film, which, following their current approach will be a full-blown action film starring Sylvester Stallone and Dolph Lundgren, who team up with their CGI-youngified selves to rescue the two survivors of the space station as only they hold the clues to beat the monsters. Probably involves firing the beam again, because hey, if it worked before? Meanwhile, in another dimension, eight-year old me is looking pleased as punch that his batshit crazy theory actually worked, and is able to blow Cobra up once more with his fully fixed plastic attack helicopter.

Cloverfield Paradox is not a bad film, it just doesn’t use the things it does well to make it something worth watching. Give us more dimension merging, that stuff worked, in the end it shows itself as it what it truly is. A script which was re-written so that it fits in with the Cloverfield world. Thing is, they did the same with 10 Cloverfield Lane, and I’d watch that over this any day of the week.

Since 2014, Duncan P. Bradshaw has been quite merrily teabagging the boundaries between genre fiction. Having gone through an early period of writing about the undead and other random thoughts, he has now entered his GoreCom phase, having settled on his style; a mix of horror, comedy and bizarro.

You can expect blood, guts, bodily secretions and maybe, if you’re lucky, a few hearty guffaws along the way. Check out the first GoreCom book, MR SUCKY, the only book about a murderous vacuum cleaner. Keep your eye out for CANNIBAL NUNS FROM OUTER SPACE! which is released in the summer of 2019. Follow Duncan on his website: http://duncanpbradshaw.co.uk/