One of the most discussed films of the past decade is It Follows. A low-budget independent feature that took the Cannes Film Festival by storm. After it’s premier, the film had everyone talking and from the word of mouth alone, my interest was piqued. I do want to say now though that the film is WAY over-hyped. Not in a bad way or anything, I feel like the reputation of the film may hurt it as the film ages, much like the aging of The Exorcist has unfortunately lessened the horrific impact that the film initially had on its audiences. This film isn’t The Exorcist, nor is it anything we have really seen before.

The best horror stories, whether it be film or prose always seem to have the simplest concepts and I feel that this is one of the shining qualities of It Follows. The film harkens back to the low-budget indie features from the late 70’s through the early 80’s with it’s visual aesthetic and it’s wonderful sound design. The film takes it’s time to set up the characters and truly make us care about what is going on. I was immediately sucked into the world that these characters were living in.

Upon my initial viewing, I found that the best parts of the film were actually the cinematography and sound design, both of which work hand-in-hand to create a tense atmosphere that you can feel. It was a fun experience that we unfortunately don’t get to indulge in too often. Most films nowadays seem to want to throw jump scares around every corner. This film does the opposite.

It Follows has a more cerebral form of horror that actually makes the viewer think. I couldn’t wait for this film to come out on blu-ray so that I could watch it a few more times and get deeper into the other elements.

All stories need to have compelling characters and It Follows delivers their answer to that in the form of Jay (Monroe). She is a normal girl who likes to spend her time with her friends just hanging out and watching movies. She has a guy that she really likes and is ready to begin a sexual relationship with. Unfortunately, this is where the story turns, revealing that the act passes on a sort of paranormal STD. 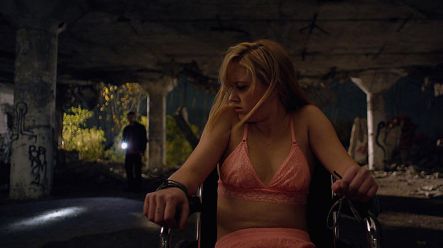 When the story turns, we see the actress truly begin to shine as much as the other elements of the film. She conveys emotion well enough and we become invested in her story.

As I have stated above, It Follows is complimented by it’s simple concept but also finds gold with it’s writing. Jay is a fully fleshed out character that we truly sympathize with and root for. A rarity in the bulk of modern cinema. David Robert Mitchell is a force to be reckoned with and he delivered an experience unlike any other. I would love to see him do another horror film, especially a slasher film. It Follows at times feels like a slasher and the sub-genre might be right in his wheel-house. His vision seems to be intimate and epic at the same time.

With It Follows, Mitchell delivers a constant state of unease and dread which is THE essential ingredient for a good horror film. He pulls from the classics, while inserting himself and putting his own voice in the film. None of the scares were cheap, a lesson modern genre creators could learn.

It Follows is a genre classic and should be considered mandatory viewing for those looking to earn their horror street-cred. Now, at the start of this review I stated that the film is way over-hyped. I don’t want you to get the wrong idea from that statement. This film is amazing, a high, high recommend at the very least. What worries me is that genre fans twenty years from now may skip this one or worse, watch It Follows and damn it just because the film gets high praise. I won’t let that change the fact that I am recommending this film, and not just for horror fans. Cinema fans NEED to watch this film.

It Follows has cemented itself in my personal horror rotation and I look forward to popping the blu-ray in every now and then to revisit the film. It is a fun ride that will hook it’s claws into you and drag you along for the ride. Have you guys seen it? If not, go check it out and come back and let me know YOUR thoughts on this modern horror classic!