Our dad had taken us to see Return of the Jedi at the cinema the year before, but nothing could prepare us for what we saw when we turned the corner to the cinema. The queue went round the building. How long it took to get in, I have no idea, but we did, despite my mum having to gain some patience.

If I’m being honest, I can barely remember much of that initial experience. Huddled in the dark with hundreds of other people, trying to take in what was going on. Funnily enough, the snippets I do remember are what I always go back to. The ghost librarian who scared the shit out of me when she turned into a snarling phantom. Slimer, stuffing his face before covering Venkman in the corridor. The bloody LOGO for crying out loud! It’s iconic, and up there with the final act where the Stay Puft man is strolling down a New York street, looking both creepy and jolly all in one go.

So tell me. How can you review a film which had such an effect on you?

Truth be told, you can’t. No film is perfect, and watching the film today, with the current sensibilities, a few scenes are a little jarring. Venkman’s creepy pursuit of Dana in her flat is a bit cringeworthy, some of the effects – especially when Vinz Clortho busts through Louis Tully’s door – are odd, as he looks flat when he lands. But, come on, the film is 35 years old now. That’s like ripping into Jason and the Argonauts because the skeletons look a little shaky.

See! I’ve done it again. I reviewed Land of the Dead last year for this site, and I was quite critical of it, especially the effects, yet I cannot bring myself to lament Ghostbusters. Why? Because some films transcend time. Some leave an indelible mark upon you, either of a specific time in your life, their meaning to you or something far less tangible. 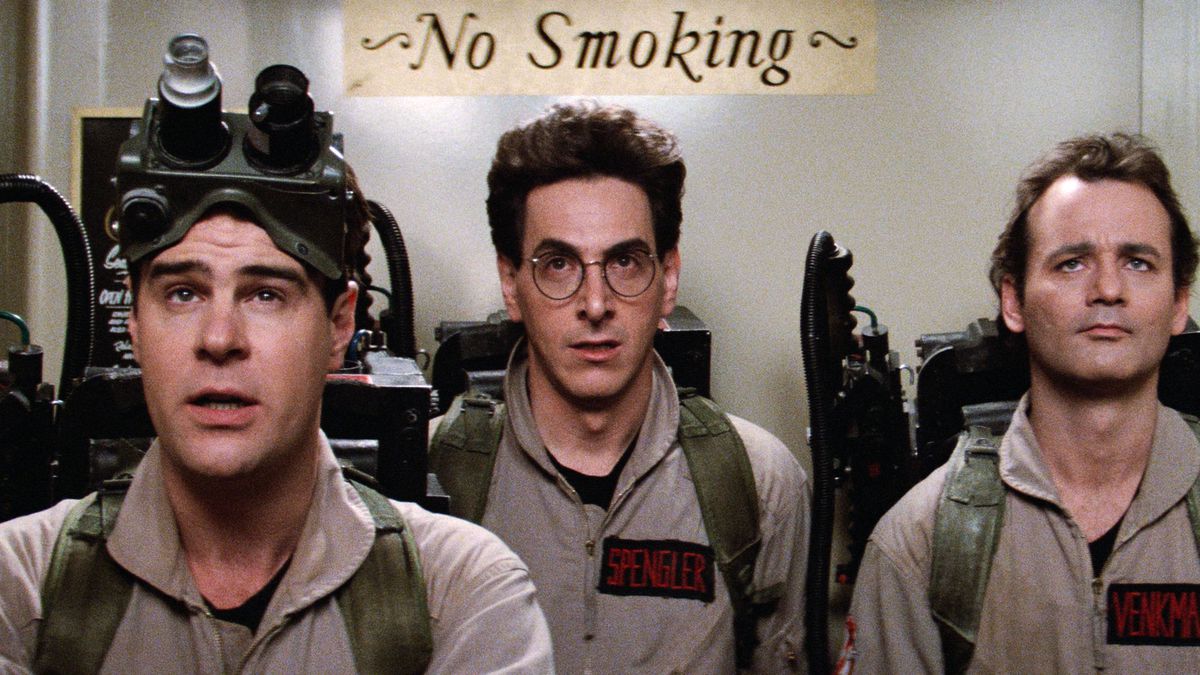 I suppose for me, when I look back at my childhood, trips to the cinema were rare, with both of our parents, even more so. It isn’t just the film and how good it is, it’s that snapshot in time, where all four of us were together, my brother and I not caring about the queue, my mum trying her best to put aside the things which annoyed her, to partake in this family activity with as much enthusiasm as she could muster, and my dad trying to feign indifference.

Ray was always my favourite. Venkman was too arrogant, Spengler too geeky, and Winston was barely in it to come to a conclusion about his personality. But Ray was the glue that held them all together. He’s the one who basically drags Peter to the library at the beginning, who remortgages his house (three times over) to get the capital to start the company up. As Egon and Peter coolly traipse round the firehouse, trying to point out all of the flaws in the hope of knocking the price down, it’s Ray, at the key moment, sliding down the fireman’s pole and ruining any chance of haggling.

It’s that giddiness he has, that undiluted glee at what he’s doing. In a way, that’s what it’s like to be a kid. You don’t look at the things that could go wrong, you look at the possibility. Even with the childhood I had, that was what I was like. Impulsive, getting into scrapes, trying to find the good in things, no matter how bad things were. Ray is that epitome of childhood innocence, encapsulated perfectly by him choosing the form of the destructor.

There are other ‘boss-fights’ that stand out from those films in the eighties, but Mr Stay Puff is definitely one of the most iconic. As Louis reels off the previous forms to Egon in the firehouse basement, you can only imagine the twisted visage that these monsters would possess. So for the end of the world to be brought about by an eighty-foot tall marshmallow man? That’s bordering on bizarro.

I suppose it is only when you’re older that you wonder how the hell the Stay Puft man is going to destroy civilisation. The logistics seem pretty unlikely, but as a kid, you’re not thinking about that. I wasn’t there rationalising on how this creature was going to destroy mankind, I was just staring – open-mouthed – as it plodded on towards them, being set on fire and still climbing up the building to try and snag them.

Even now, three-and-a-half decades later, I’m still noticing new details. Like the bag of a particular brand of marshmallows, sitting on Dana’s kitchen counter as the eggs start exploding. Mind you, by this point in my life, I can recite entire scenes verbatim.

And that’s how big a deal this film is to me. It stands as one bookend of my life. Back to a simpler time where responsibilities were a distant dream, and imagination was key.

Watching it now is no less enjoyable, but if anything, it is a stark reminder at how much you lose as you grow up. I try to stay as relaxed and as irreverent as I can the older I get, but I’m not immune to the pressures and strains of existing, especially through the current times.

And this is why films, especially ones like Ghostbusters, are so key. They’re not there to moralise, to tell you what you should think or how to feel. Like so many films from that decade, they’re pure entertainment. And in today’s world, with all the shit that we get fed and loaded down with, switching your brain off for one hundred minutes, and watching something so wonderfully produced, is something that we all need to take advantage of.

Go on, treat yourself. Watch Ghostbusters again, remember what it was like when you first saw it. Enjoy it for what it is, and what it symbolises in all of the films you’ve ever watched.

Since 2014, Duncan P. Bradshaw has been quite merrily teabagging the boundaries between genre fiction. Having gone through an early period of writing about the undead and other random thoughts, he has now entered his GoreCom phase, having settled on his style; a mix of horror, comedy and bizarro.

You can expect blood, guts, bodily secretions and maybe, if you’re lucky, a few hearty guffaws along the way. Check out the first GoreCom book, MR SUCKY, the only book about a murderous vacuum cleaner. Keep your eye out for CANNIBAL NUNS FROM OUTER SPACE! which is released in the summer of 2019.

My zombie short story collection, CHUMP, was nominated for a Saboteur Award in 2017. In addition, I’ve had short stories published in a variety of anthologies, and shared pages with some of the leading lights in genre fiction.