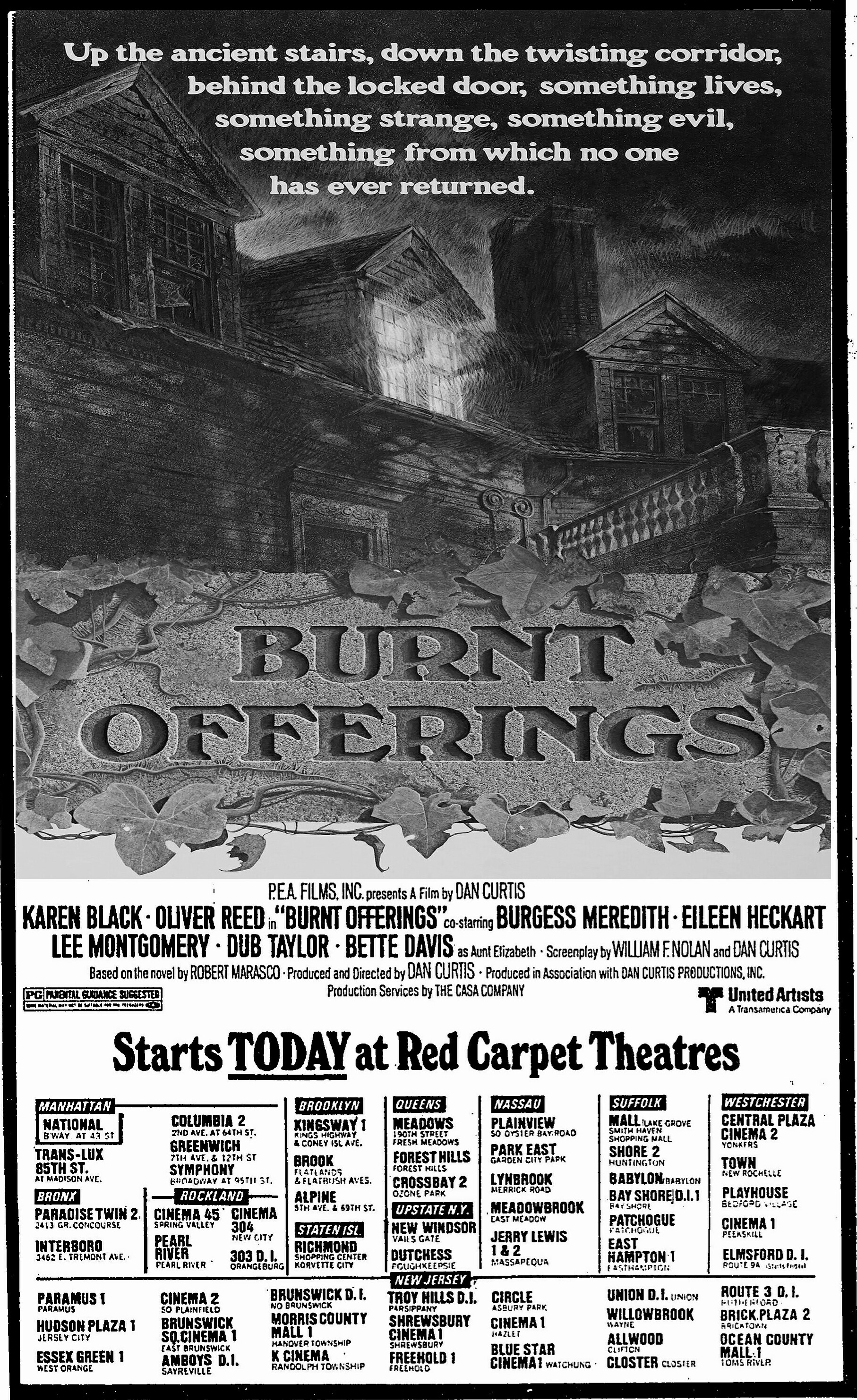 There is something about horror movies of the 1970s that I love. Maybe it’s the pre-social media age. There’re no cell phones, no cable TV, no internet, not even compact discs or home computers. The time is one of simplicity. Or so it would seem. I imagine without all our modern distractions, there is more focus on what lies beneath.  It was also a time of mystery. Putting a man on the moon was only something, at the time, that we’d just been able to accomplish. We simply knew less. Religion was much more accepted and widespread. Science was growing but it was still looked at as part fantasy. Less knowledge about how the world and the universe worked meant there was more room for our imaginations to wander in the dark void.

Burnt Offerings is based off a novel with the same name published in 1973 by Robert Marasco.  Director/producer Dan Curtis co-wrote the screenplay with author William F. Nolan.  Curtis was mostly a TV movie guy but does a wonderful job taking up the big chair for Burnt Offerings.

Brilliant performances from Karen Black (Invaders from Mars) and Oliver Reed (The Devils) carry this carefully paced story of a house that feeds off its hosts to bring itself back to life. Black plays Marian Rolf, Reed her husband Ben, along with a nice side part for veteran actress, Bette Davis (What Ever Happened to Baby Jane?) as Aunt Elizbeth.

The story has the Rolf’s looking for a home to rent for the summer to escape their tiny, noisy apartment in the city. They find this overgrown with weeds and falling apart at the seams mansion cared for by the Allardyce’s, Arnold and Roz, a brother and sister looking for someone to simply love the home in their absence. They rent the place to the Rolf’s from July 1st to Labor Day for a grand total of $900.  Surely there’s a catch?  The Allardyce’s mother, an 85-year-old lady who stays in her room (and is never seen onscreen or by anyone as far as we can tell), is staying behind and the Rolf’s only need to make sure she gets her three trays of food a day.  How freaking weird is that?

As the Rolf’s make themselves at home, the house begins to slowly come back to life. Ben cleans the pool and gets it working, but the tiles and around the pool become like new, and the yard itself is beautiful again. These things occur slowly, so as not to be noticed.

Problems begin to arise when Ben starts to have visions of a past incident from his childhood that frightens him. He reacts by either getting angry or totally incapacitated by his fear.

Marian tends to “mother” bringing her food and spending time in the woman’s sitting room. She all but disappears from her husband and son, spending all her time and placing her attention on the house and Mother Allardyce.

Within weeks, we have Ben seemingly being possessed and nearly drowning Davey in the pool. We have a gas leak in Davey’s room that almost kills him, and then after Marian accuses Aunt Elizabeth of turning the gas on and locking Davey’s door, Aunt Elizabeth is attacked in her sleep and ends up dying.

The movie ends with the Rolf’s packed and ready to escape, but Marian feels she must tell Mother Allardyce before they just leave her there. And that one move leads to some hairy stuff in the final  scenes of the film.

Burnt Offerings is a movie as far removed from the modern digital, go-go-go, multi-tasking, instant gratification age we live in now as you can get. It’s charm and spell are cast like sap, slow and steady, yet sweet and rewarding. You feel as though you’ve been invited into an old house and are being told an old family story right from the start. The special effects are minimal, yet their impact cannot be denied. Especially Ben’s fate at the end of the film. When we see him sailing out the top floor window and smashing through the car windshield below, his blood dripping from his head as Davey screams from the backseat…man, it’s gold. There’s also a creepy scene where Aunt Elizabeth is attacked, where she bends at odd angles as you hear a horrid crack (her spine?). Watching that scene this week conjured up the sight of Zelda from the original Pet Semetery film.  I wondered if maybe, visually, they may have borrowed, however slightly, from Aunt Elizabeth’s bed scene. Probably not, but you never know.

There’s also a creepy guy known in the credits as “The Chauffer”. He’s part of Ben’s past and his mirrored glasses, pale complexion, and creep as all get out smile will unnerve you. His few scenes are definitely effective. The scene where Ben loses it and nearly drowns Davey is also quite unsettling and puts you on edge. It’s cool how they manage to slip these really emotive scenes between the ones that seem to be puttering along like all is fine.

The music throughout is also perfect. I love movies that use strings in all the right places. Not too much, just easing them into the scenes at the right time. Like a pair of strong, scaly hands sneaking up over your shoulders and cinching your throat before you notice. And when you do notice, they disappear like nothing was ever there.  Some movies tend to slam you with their soundtrack at every possible turn. Not Burnt Offerings. Less is more is pretty much the theme to this one. And I love it.

Another cool thing I noticed was when the Rolf’s arrive, they notice all the portraits on the walls and in and around the house. “Memories of a lifetime” is what Roz and Arnold say about mother’s fascination with her portraits. In the end we see Ben, Marian, and Davey’s portraits lined up with the rest. Having just seen the movie, Summer of ’84, I couldn’t help but wonder if they may have also found this a cool idea and added it to their film. Again, probably not, but I like seeing these little similarities tying some of my favorite flicks together.

I love this movie and book (not just because they feature a family of Rolf’s). I think the acting is top-notch, Karen Black is beautiful and stoic as ever, Oliver Reed is a master of flowing from angry and possessed to frightened and cowering, and then back to the loving, strong husband like he’s trying on different sweaters that all look and feel great.  And Burgess Meredith (Micky form Rocky) gives us a creepy little turn, though his screen time is very brief, as the brother, Arnold Allardyce. 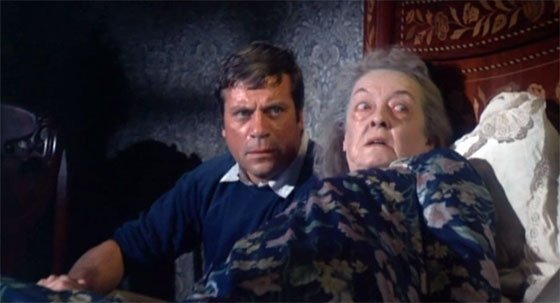 If you’ve read the book or other classics like Michael McDowell’s haunted, The Elementals, you know you must have patience when traipsing through these words or scenes. You must put yourself in the hands of the storyteller and trust that the payoff will be worth it. This slow burn is hellaworthy. 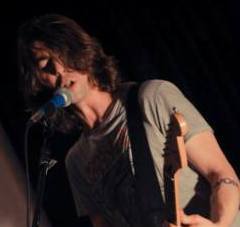 Glenn Rolfe is an author/singer/songwriter from the haunted woods of New England. He has studied Creative Writing at Southern New Hampshire University, and continues his education in the world of horror by devouring the novels of Stephen King, Ronald Malfi, Jack Ketchum, and many others. He and his wife, Meghan, have three children, Ruby, Ramona, and Axl. He is grateful to be loved despite his weirdness. He is a Splatterpunk Award nominee and the author of Becoming, Blood and Rain, The Haunted Halls, Chasing Ghosts, Abram’s Bridge, Things We Fear, and the collections, A Box Full of Monsters, Out of Range, Slush. and Land of Bones. Check out his latest novel, The Window. He is hard at work on many more. Stay tuned! Follow Glenn on his website https://www.glennrolfe.com . 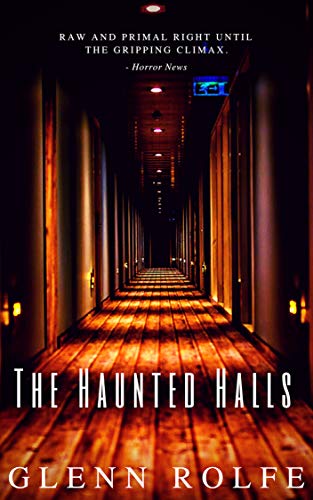 “The evil is dark, malevolent, and sexually charged! If you like your horror to have a bit of meat on the bone, you should consider adding this book to your personal TBR list” – Cemetery Dance.