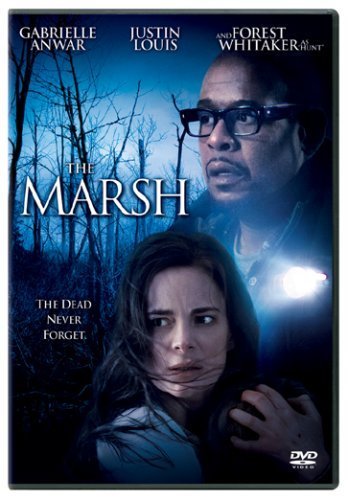 “The Marsh” (2006) opens with the main character, Claire Holloway (Gabrielle Anwar), who is a stressed children’s book writer, reading to children in a book store, but quickly follows with a more ominous and action-oriented beginning. Images and sounds from an eerie marsh, followed by screaming, are taken in by our senses as the front credits roll. Soon, we realize we are in Claire’s nightmare from which she awakes in a doctor’s office. It seems she isn’t taking her medication and the doctor tells her “something” is evolving. This makes us wonder if she has anxiety, mental health disorder, trouble sleeping, or what? She seems stressed so in the beginning I was going with anxiety.

While she is running on the treadmill in the next scene, she’s watching and hearing on the television about a bed and breakfast in Westmorland County, which she then goes to look up and finds is Marshville. With early sounds of paper ripping, and as she is printing out the photo of the Southern Gothic-style mansion and the black inks runs all over it, we realize other foreshadowing with visuals and a sense of unease with sound effects and music is created effectively for us. 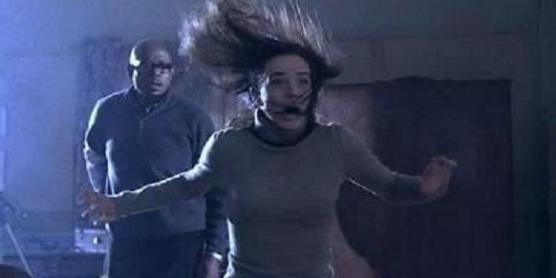 The area of Marshville, and particularly the bed and breakfast, looks like scenes from her nightmare. She goes to Rose Marsh Farms and is the only guest. As we are shown the outside scenery, “Old Mister” scarecrow gives a scary feel as well as tree swing moving back and forth in the wind. The caretaker/owner says, “I’d steer clear of that (the marsh) if I were you.” Um, yeah – like anyone ever listens to warnings in scary movies? Besides, it’s steps away from the front door.

When she goes into town, she begins to see people that she saw previously in her nightmares or glimpses in her mind. Though not said, I wonder if she can see things. They look at her strangely too and this gives you goosebumps while watching it. She meets a publisher/author Noah Pitney (played by Louis Ferreira) who seems to want to see her again; he also wrote a book about the history of the area which she picks up at a local grocery store.

Back at the home, she has writer’s block, and she utilizes her now ancient flip phone screen for a flashlight to look around the home, as the electricity conveniently goes out and lights flicker. As we all know, these are signs of a presence, right? 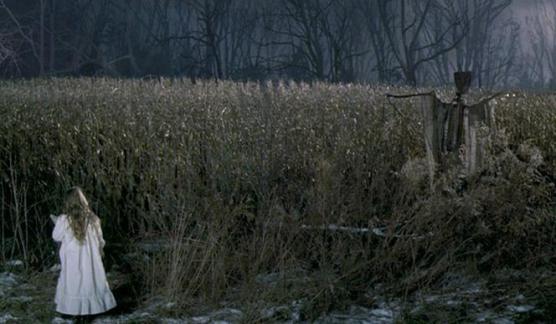 As she isn’t too scared even if we are, she sets off searching around the home with her flip phone and there is a beautiful rose stained-glass door she comes upon, which is likely an ode to the Rose family who settled the area (she was told that by the bed and breakfast owner, and by now, she’s read the author’s book), and she’s drawn to it while searching the home.

Twenty minutes in and there is barely any dialogue, but that’s not a bad thing, just something I noticed. We are propelled through her eyes— sights and sounds. They want us to feel the film, and they accomplish this in me. She calls the publisher, who had given her his card, to help her fix the door with the stained glass as it’s blown open during the outage and small storm – there is a lot of snow and gusts of wind—and he leaves (a little drastically, in my opinion).

I jump out of my seat as she sees a teenage boy and a little girl haunting her. I’m more freaked out than she is, after her initial scream. Soon after, she finds an occult and paranormal consultant’s card under the couch. 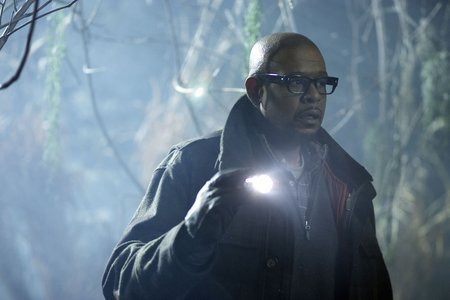 When she meets up with the publisher again, he said, “I read your children’s books The Marsh to my niece and it was creepy.” She tells him that all great children’s books are dark. Fairy tales take on the unconscious fears of the mind. I love that! Isn’t that true? This was one of my favorite conversations and interactions within the movie.

Creaking floors, slamming doors, whistling winds and I’ll add flickering lights, continue to set the scene for us creating tension. I think the movie does this very well and it’s only less than half-way in and I’m freaked out.

Curious, she goes to meet the consultant, which is Geoffrey Hunt, played by Forest Whitaker. She said she doesn’t believe in ghosts after his dog starts going crazy barking at her (you know what that means too, right?). He accompanies her back to the house. “Doors can be both symbolic or literal” and he tells her if you take a door down you keep someone out, put it back up and invite them back in. I think this is another great piece of dialogue.

From the beginning to the half mark the movie is very slow moving, but with a good amount of tension, atmosphere, and jump scares as well as spine-tingling ones. The mystery keeps you watching and interested. Hunt begins to ask questions to uncover who she is, how she is connected, if she is, and why she wants to fight this battle. It’s like the unwrapping of a gift you don’t know is good or bad – but you’re frightened, because well, spirits of children!

The last half of the movie I’m not going to cover as I don’t like to give away plots in scary movies but allow them to unfold for the viewer. It does heighten up in way of action and the situation unravels the clues and mystery as well as who is behind the haunting and why. We have a decent resolution, if not somewhat predictable, but that is most likely because since this was made in the mid-2000s, we have seen a lot of movies with the same plot and same haunted house. I picked this movie though, because I am a water fiend and marshes have always interested me. I don’t think I’ve seen too many, if any, horror movies taking place near a marsh, so that part wasreally clever and added to the scare factor.

The movie is rated R for violence and language, but that’s like nothing compared to what’s being viewed today. If you like the strings of movie circa the mid-2000s, like “The Others,” “The Sixth Sense,” “The Secret Window,” you’ll probably like this. It was a pretty low-budget movie shot in Canada but is fairly well-done and professionally made from a scenic and special effects point of view. The acting is also really good and both of those combined help to make it a movie worth watching. What set it over the edge though was the stellar writing. I loved the conversations and thoughts in this movie—well beyond a normal indie movie in my opinion. At this point, with it being over a decade old, I would have preferred to watch it free on streaming, instead of the $4 I had to spend to rent it though. 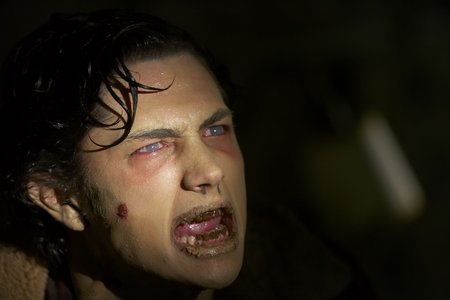 My favorite quote from the movie from Hunt:

“I believe in people. I mean, people are water and energy. If water can transform from ice into steam, into mist and energy transforms them, why can’t people?”

If you like Gothic, creepy, atmospheric hauntings, this one could be one for you to watch when you need a break late at night and want to get your spine tingling. 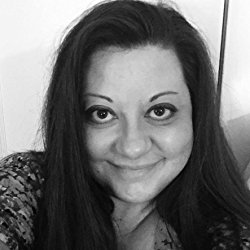 Erin Sweet Al-Mehairi has Bachelor of Arts degrees in English, Journalism, and History. She is an author and has twenty years of experience in her field in jobs as a writer, a journalist, an editor, and marketing and public relations professional/publicist among many other things.

Breathe. Breathe., published by Unnerving in 2017, was her debut collection and a mix of dark poetry and short stories. Her work has been called raw, honest, evocative, beautiful as well as clever, brutal, and chilling by industry professionals, reviewers, and readers alike. She has stories and poems featured in several other anthologies (Hardened Hearts, PEN’s My Favorite Story, and Dark Voices) and magazines (Enchanted Conversation and The Siren’s Call) and was the co-editor of the Gothic poetry and short story anthology Haunted are These Houses. In 2019, she’s busy writing several stories for anthologies she’s been invited too and heading into editing stages on a next collection, poetry-only, and searching for a publisher.

She continues her own businesses, Addison’s Compass PR, in which she’s worked for business and non-profits both, and Hook of a Book Media, the latter of which currently takes up most of her time as she does editing, publicity, and consulting for many authors. She’s was an editor at Sinister Grin Press for almost three years and assists with marketing and public relations duties at Raw Dog Screaming Press.

Within the publishing world, besides managing her own site Oh, for the Hook of a Book!, she also has conducted interviews and written for Beneath the Underground, The Horror Tree, Machine Mean, and more in the horror genre, as well as served as an independent award judge in the historical fiction genre.

She’s been honored to have received a woman of achievement award in her community and to have represented the Business and Professional Women/Ohio as Ohio’s Young Careerist. Currently, she has served as board president of her local mental health and rape crisis domestic violence safe haven for two years.

Proudly born in England, Erin now writes multiple stories, novels, and poems from the forests of rural Ohio where she frets over her three children and a cat. 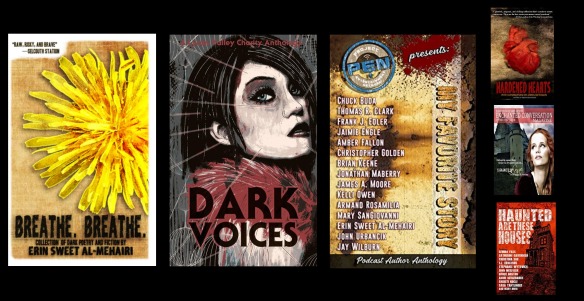 You can read one of her latest flash fiction stories HERE or you can go to Amazon to purchase a copy of her collection, Breathe. Breathe. 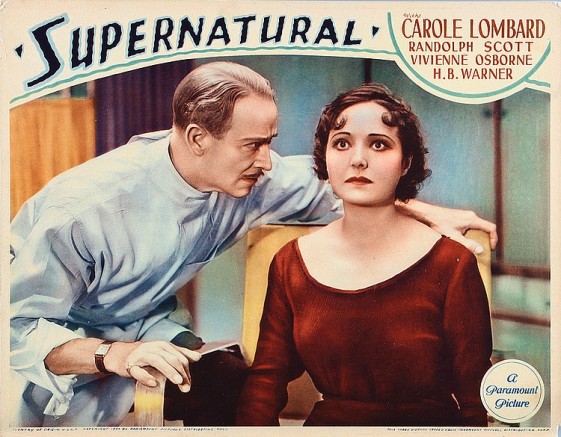