In 2002, horror was figuring out the next step in its evolution. The ’90s had ended on a high note, with The Sixth Sense re-establishing slow-burn ghost stories as financially viable, and The Blair Witch Project bringing found footage to the masses in a way the then-cult stomach-churner Cannibal Holocaust never could. At that point, Dark Castle had brought a few inventive re-imaginings of William Castle films to a new generation of horror viewer, while the remake floodgates wouldn’t be kicked open proper until 2003’s The Texas Chainsaw Massacre. It was also two years before Saw (allegedly) captured the zeitgeist of the George W. Bush era, turning notions of torture into a financially lucrative extension of the genre.

2002 did show inklings, however, of where mainstream horror might go. In a nod to the relative subtlety and simplicity of The Sixth Sense, and the “something’s out there” (but not necessarily seen) notion of The Blair Witch Project, Dreamworks mined a hit from Gore Verbinski’s The Ring (itself a remake of Japan’s Ringu).

But here’s the thing: in 2002, The Ring saw release on October 18; while FearDotCom (FDC hereafter) was unleashed on August 30. Both films concern everyday people who stumble into paranormal realms, where the rules of man and law do not apply. Similarly, the plots of each revolve around vengeful spirits using technology as a conduit to spread death and destruction (the cursed VHS tape in The Ring; the Internet in FDC).

What I’m saying is: for all its blemishes, FDC came in hot with something (relatively) new, complete with a reliable genre director (William Malone, of Dark Castle’s House on Haunted Hill remake) and the seemingly inexplicable backing of a major studio (Warner Brothers). Its premise was built around a technological tool that was still in the early stages of its commercial evolution. The reality of the Internet at that time was mostly a vessel to watch music videos or leave comments on message boards (people weren’t yet living and dying by upvotes and gifs).

In one of its better-rendered metaphors, FDC introduces Health Inspector Terry Huston (a wonderfully aloof Natascha McElhone), who partners up with Detective Mike Reilly (Stephen Dorff), as a character who “likes working with bugs and viruses.” Jeannine Richardson (Gesine Cukrowski), the unsettled ghost at the center of the tale, endured the tortures of serial killer Alistair “The Doctor” Pratt (Stephen Rea) so extensively, we’re told, that the will of her departed spirit lives on in the literal and figurative ether(net). The vessel which allows Jeannine to enter into reality and claim her victims is the host site for Alistair’s real-time torture shows. The “virus” analogy runs both ways: Alistair as a parasite preying on humanity; and Jeannine infecting those who log onto his site, killing them 48 hours later (after bringing their worst fears to life).

As for the “bugs”…well, there is a setpiece involving cockroaches (as good a squirmy standby as any).

Working from a story idea by producer Moshe Diamant, screenwriter Josephine Coyle bypasses the intricacies of technology in favor of an approach that renders the Internet a foreboding – and possibly deadly – place. Bad things happen because they can, and the viewer is expected to suspend their disbelief. The film’s expository dialog is a lot of gobbledygook, but there’s a wonderful scene where veteran character actor Michael Sarrazin (The Seduction) dismisses it all as “bullshit.”

In addition to the J-Horror stylings of The Ring, FDC also owes a debt to the body horror of David Cronenberg. While Malone is more preoccupied with fusing ghosts and technology to an overbearing Noir look, the film does come across as a viable companion piece to Videodrome. In that precursor to the 1980s VHS boom, a cable-access programmer is exposed to the toxic signal of the titular torture show, and is left to contend with the fallout as he becomes a pawn in a greater conspiracy. That said, FDC doesn’t have plans for world domination (despite the global reach of its central conceit), opting instead for an intimate revenge saga.

Still, it bears noting that Alistair’s dialog precludes the type of misanthropic cynicism that would become commonplace in the Saw sequels. Early on, he gives a monologue that borrows from the “rot of North America” speech from Videodrome, while espousing a similar prophecy toward the rise of social media:

It’s telling of the character’s narcissism that he waxes poetic while torturing his latest victim, while oblivious to Jeannine’s extended life in angry-spirit form. “There’s always a tweet” becomes “there’s always a vengeance-seeking ghost.”

Alistair speaks to the irony-greased gears of current social-media attitudes, in that it’s far more desirable to profess disaffection than admit weakness or display genuine emotion (unless said emotion is a profuse love or hate of something). When he states, “I’d like to say I can feel your pain, but I can’t – I’m deprived somehow,” it’s indicative of the sociopath’s lack of empathy, but also today’s breed of bad-ass poseur who, when transgressions are exposed, melts under scrutiny.

But its perceptive – and perhaps accidental – techno-social commentary aside, FDC‘s link to the realm of the paranormal is most evident in its aesthetic. Set in New York City (but filmed in a variety of locations – from France to Montreal to Luxembourg), the film apes the squalid locales of Seven (dingy apartments; dank warehouses) and even Eraserhead (disused industrial machinery and factories), whilst placing the characters in a perpetually dour, mournful world of near-constant rainfall (another Seven echo). On the DVD commentary, Malone and cinematographer Christian Sebaldt talk of making the film dark enough to have the viewer “lean in closer” to decipher the finer details. The blacks, blues, and gun-metal grays that dominate the color palette are as fascinating as they are frustrating – in some ways, FDC is a pain to watch because of this; but I admire Malone’s desire to do something inventive with the imagery. The overall look – monochromatic to the point of almost being black and white (characters are permitted to regain their normal skin tones only after the evil is vanquished) – is also indicative of Malone’s fanfare for the horrors of yesteryear. He refers to 1934’s The Black Cat on the commentary, and even directly homages it in one of the key locations (named after Karloff’s character, Poelzig), while bringing its still-resonant depictions of technology, obsession, and torture into the modern age. 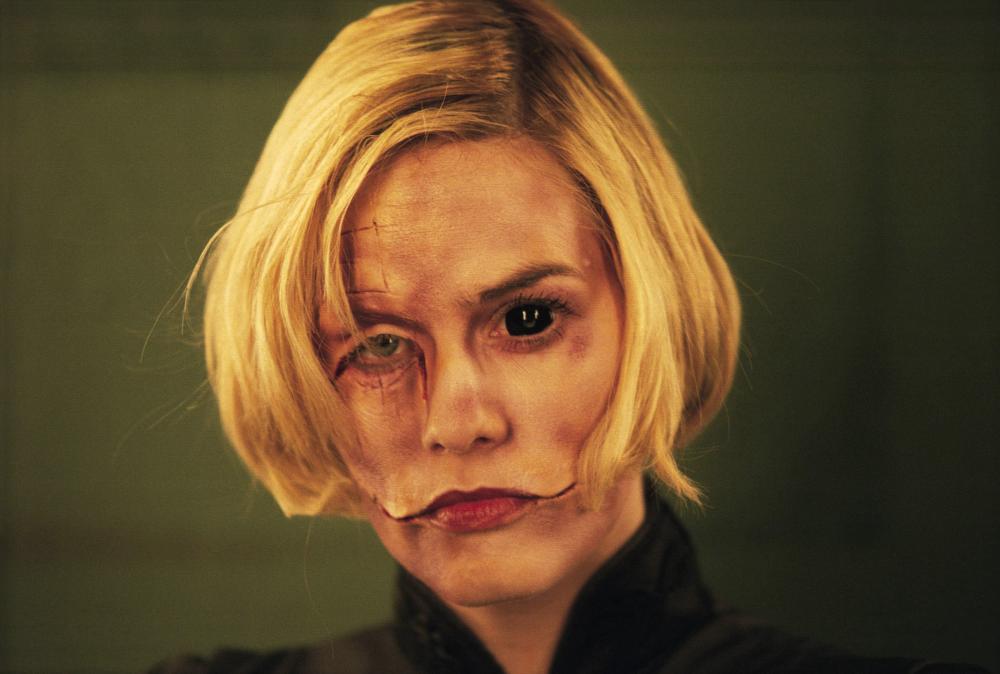 This dreary world lends itself well to the spectral story at the film’s core. Despite the emphasis on a then-burgeoning form of technology, it invokes a bygone era of Noir-styled cops, assertive yet dorky dames, and comic-book killers who’d be right at home in an even darker iteration of Dick Tracy. There are times when characters are wandering around rooms, and the mood is so thick, you can practically feel the smears of ectoplasm (and other substances) on the walls.

In analogizing the Internet as something mysterious to the point of being paranormal, Malone’s insular world is appropriately detached from any convincing depiction of reality: it’s a place where Terry and Mike implore one another not to access the deadly website, only for each of them to do just that in the following scenes (because there would be no movie otherwise); or that a mother would be so cordial to a stranger inquiring about her daughter’s horrible end. The unnatural feel of the performances and dialog only adds to a film that seems to be taking place on another plane of existence – such is the case when exposed to heavy doses of Videodrome – er, FearDotCom – signal.

3 haunted flash drives out of 5