“Sleepy Hollow” is a film directed by Tim Burton and I am a huge fan of this director. Consider he’s using the source material of one of my favorite classic horror authors Washington Irving, and one of my favorite short stories “The Legend of Sleepy Hollow,” what’s not to like? I really enjoyed the show that was on television a few years back as well, but in 1999, just having my first baby, I wasn’t really getting out to the theaters. Somehow, though I always wanted to watch it, I just never did. Now, almost twenty years later, the movie didn’t feel old at all, due to the cinematography, decent special effects, and cast of stellar supporting actors (not to mention how young Depp looks). I’m sure the time period the movie is set in (the 1800s) also helps with that. At any rate, I mean I didn’t feel I was watching a cheesy ‘80s or ‘90s movie of my youth.

Ichabod Crane, played by Johnny Depp, is sent out from New York City to the country village of Sleepy Hollow in order to investigate a string of murders supposedly carried out by the Headless Horseman. As the movie opened, viewers see a crazed maniac of a man, played by Christopher Walken, who would become the Headless Horseman, to give us an action scene and set-up the movie, but we then revert to the meat of the story once Crane arrives. I must say though now that at the beginning and at the end, Walken – though perfect for the part – was also rather ridiculous! From his face make-up and hair to his demeanor, it was all very comedically over the top. I would have preferred him to show more real evil, haunting even, not be necessarily someone who I felt I needed reach up and brush his hair or teeth. Of course, I’m sure it was intentional, because well…Burton…and this is all fine and good if that’s what you are looking for. It works with the movie.

This is where the supernatural comes in as Crane investigates because the Headless Horseman of course was killed and without a head. Or is someone just pretending to not have a head and be haunting the town? We aren’t really sure, and casts of doubt are sprinkled on others throughout the movie. I did love the use of the pumpkin heads, which reminded me a bit more of Burton’s influence. 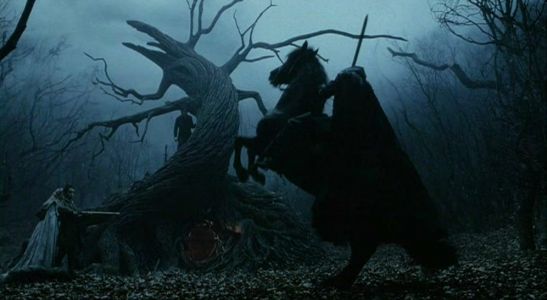 Depp was also incredibly weird in this movie, and as I was thinking, I realized that this was probably one of the first he acted this way in – with this sort of non-human, bumbling, over-dramatic, whiny character that partially stemmed from him being Edward Scissorhands in the movie of same name in 1990 – but over the years he’s perfected it, not to my liking, and played it in every role since to the point it seems this is actually HIM now. Jack Sparrow, Mad Hatter, Sweeney Todd, the Wolf in “Into the Woods,” Barnabas Collins in “Dark Shadows,” Willy Wonka – need I go on? WHY? He used to be a really good actor I adored in movies like “Donnie Brasco,” “Blow,” “The Astronaut’s Wife,” and “Chocolat.” But I digress. My point is, it’s great in a few movies such as this one to act this role, but seeing him act the same character repeatedly, well.. it makes this character seems so much weaker and more untrustworthy. I would have preferred he just be a slightly quirky detective. Depp related in interviews that he felt Irving wrote the character initially “to be in touch with his feminine side” and would/should frighten easily – which he does in the movie of course (cue scene with spider – eye roll). Interesting enough to me, I don’t really feel that Irving wrote the character as such, and I might have liked more of an action hero if I ever see a re-make of the movie happen, but overall, Depp’s depiction worked with the overall feel of the film.

Christina Ricci also gives the movie’s age away because she’s young and blond and doesn’t have the edge she does now to her, even if as a child she was Wednesday Addams. She looks nothing like that in this movie, but of course, she’s supposed to be Dutch and blonde, but she looks like a porcelain doll.  Maybe this movie also turned her onto the horror acting genre, I don’t know, but in her role as Katrina Van Tassel she does quite well, a young lady whom would become Crane’s love interest, and her home of which she lives with her father and step-mother being where Crane was put up as far as lodging. In my opinion, she brings a more serious tone to the story that’s much needed. Mr. Van Tassel was a town businessman, soon-to-be leader of the city, and Katrina is the only heir to his rich farming interest and so the Van Tassels are deeply tied to the storyline, even more than I can relate here due to wanting to prevent spoilers. However, I will say that Katrina Van Tassel brings not only the romance element to the story, and a partner-in-crime for the detective so to speak, but also witchcraft. I think that, and again without spoilers, that is one of the most favorite parts of the movie for me and I loved how it wrapped up at the end.

I can certainly see why “Sleepy Hollow” won an Academy Award for best art direction, as with many Burton movies, is was a pleasure to view, from the scenery of the forest to the Hudson River Valley to the beautiful home and village to the windmill to the snow and even the make-up and costumes. It was divine and kept my interest in the story even when the characters waned. I loved the monochromatic effect that the movie was shot in which gave it a vintage, surreal feel. I think it’s one of the main reasons the movie has some lasting power to it and is age-resistant.

One of my favorite parts was at the beginning when the red wax drips to the floor, and then the camera pans to show the letter and the red wax being heated and a seal pressed through it. The Van Tassel family crest, with the Dutch windmill, just made this history buff – and windmill fanatic – a bit giddy.

As for the blood and guts, even though “Sleepy Hollow” at first was under consideration to be made as a slasher film (I suppose that comes later with Sweeney Todd instead) with murders left and right, there isn’t much in the way of it in this final film. At the beginning there is hardly at all as even when heads are cut, they fall with no blood on the neck or splatter to the ground. Later, there is more as blood splatters or pools, but looks a bit like more red wax or ketchup than blood. For a movie to watch with your family, this works just fine. It’s horror on a minor level and isn’t the focus of the film. The finale of the film really heats up in terms of action, violence, blood, and anxiety, as we watch wanting to know the outcome. Will Crane continue to outwit the predator, or will he solve the case? How is Katrina involved? 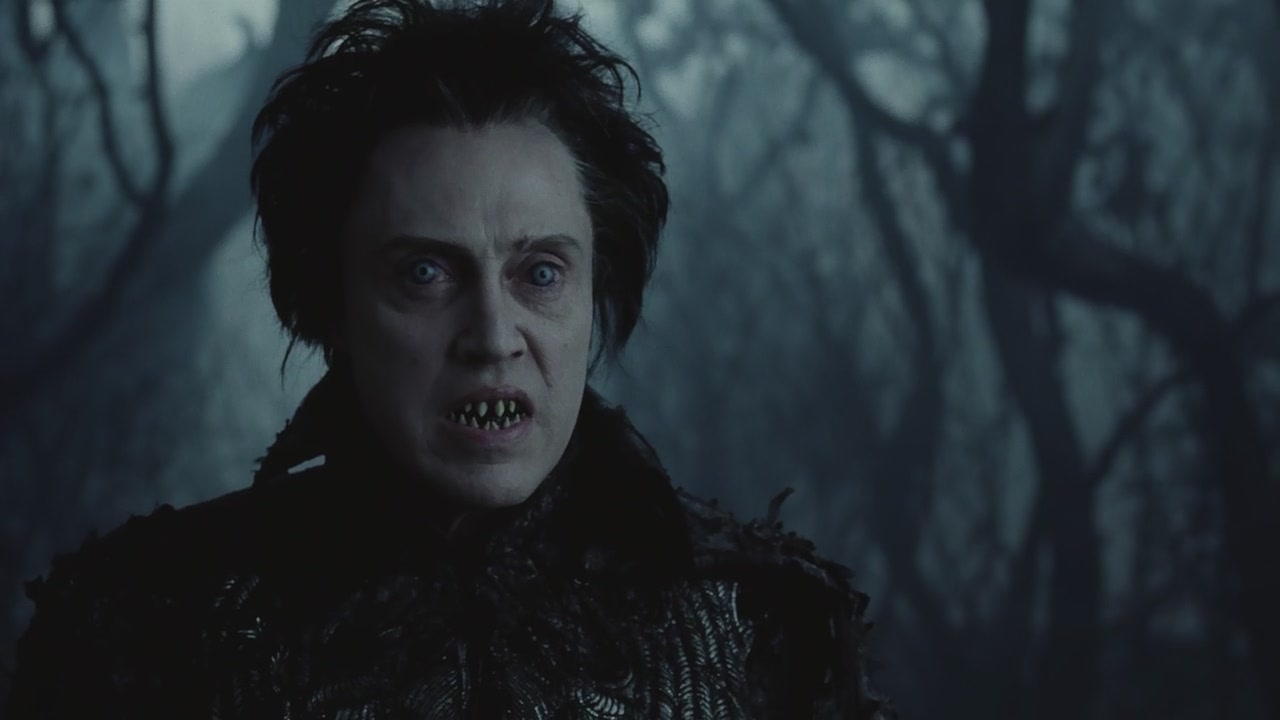 To sum it all up, I was critical of parts of the film, but overall it was enjoyable to watch and will be one I’ll buy for the collection and watch again. I love Tim Burton films, and this has his mark stamped all over it. The soundtrack is also lovely and gives the movie an air of a stage performance, much like “Sweeney Todd,” which is something for which I always have an affinity. It’s horror, but of the classic variety and on a mainstream level, and so therefore it’s one the whole family can enjoy.

As for me, I am just glad I am over my nightmarish fear of the Headless Horseman at last.

Of note: I was thrilled to find out I could watch it for free instead of renting or purchasing since they just added it to Shudder, which is a channel I took advantage of for the month since they’ve offered a free month code in celebration of women in horror month (WIHMX).

Erin Sweet Al-Mehairi has Bachelor of Arts degrees in English, Journalism, and History. She is an author and has twenty years of experience in her field in jobs as a writer, a journalist, an editor, and marketing and public relations professional/publicist among many other things.

Breathe. Breathe., published by Unnerving in 2017, was her debut collection and a mix of dark poetry and short stories. Her work has been called raw, honest, evocative, beautiful as well as clever, brutal, and chilling by industry professionals, reviewers, and readers alike. She has stories and poems featured in several other anthologies (Hardened Hearts, PEN’s My Favorite Story, and Dark Voices) and magazines (Enchanted Conversation and The Siren’s Call) and was the co-editor of the Gothic poetry and short story anthology Haunted are These Houses. In 2019, she’s busy writing several stories for anthologies she’s been invited too and heading into editing stages on a next collection, poetry-only, and searching for a publisher.

She continues her own businesses, Addison’s Compass PR, in which she’s worked for business and non-profits both, and Hook of a Book Media, the latter of which currently takes up most of her time as she does editing, publicity, and consulting for many authors. She’s was an editor at Sinister Grin Press for almost three years and assists with marketing and public relations duties at Raw Dog Screaming Press.

Within the publishing world, besides managing her own site Oh, for the Hook of a Book!, she also has conducted interviews and written for Beneath the Underground, The Horror Tree, Machine Mean, and more in the horror genre, as well as served as an independent award judge in the historical fiction genre.

She’s been honored to have received a woman of achievement award in her community and to have represented the Business and Professional Women/Ohio as Ohio’s Young Careerist. Currently, she has served as board president of her local mental health and rape crisis domestic violence safe haven for two years.

Proudly born in England, Erin now writes multiple stories, novels, and poems from the forests of rural Ohio where she frets over her three children and a cat.

You can read one of her latest flash fiction stories HERE or you can go to Amazon to purchase a copy of her collection, Breathe. Breathe.