Paranormal & Supernatural in Review: The Haunting (1963)

When folks talk about the original haunted house story, most people are referring to Shirley Jackson’s 1959 classic The Haunting of Hill House. This book has been adapted more times than any other haunted house story. From Salem’s Lot (yes, King alludes to Hill House as a comparison to the Marsten House) to even Hell House (though Richard Matheson took his 1973 book deeper into the paranormal investigative niche and spawned his own adaptions) to the most recent Netflix mini series, simply titled The Haunting of Hill House, which has spurred a resurgent interest into the old gothic tale. There are two other adaptations, of course. One we will not discuss because it is a horrible heap of garbage. The other is as close to the perfection that Miss Jackson composed within her 246 page as a movie can get.

“Dr. John Markway (played by Richard Johnson), an anthropologist with an interest in psychic phenomena, takes two specially selected women to Hill House, a reportedly haunted mansion. Eleanor (Julie Harris), a lonely, eccentric woman with a supernatural event in her past, and the bold Theodora (Claire Bloom), who has ESP, join John and the mansion’s heir, cynical Luke (Russ Tamblyn). They are immediately overwhelmed by strange sounds and events, and Eleanor comes to believe the house is alive and speaking directly to her.”

While my goal here is to not make a play by play comparison to the source material, I kinda can’t help myself in some instances. The Haunting (1963) is the closest movie or TV show to the book and at first I thought it would falter due to its proximity. But that is not the case here. The few differences actually improved the story, more or less. The opening begins with the celebrated Shirley Jackson quote:

“No live organism can continue for long to exist sanely under conditions of absolute reality; even larks and katydids are supposed, by some, to dream. Hill House, not sane, stood by itself against its hills, holding darkness within; it had stood so for eighty years and might stand for eighty more. Within, walls continued upright, bricks met neatly, floors were firm, and doors were sensibly shut; silence lay steadily against the wood and stone of Hill House, and whatever walked there, walked alone.”

And thus begins the movie with Dr. John Markway narrating the sinister history of the house. Its a five minute introduction that opens to the good Doctor securing a lease from Mrs. Sanderson to investigate the existence of the paranormal within the confines of Hill House, who had eventually inherited the house. The old woman agrees based on the pretense that the doctor include her heir, Luke, and that the doctor can somehow prove that the afterlife exists–something similar to what Matheson expands on in his book Hell House. Markway has also selected other mystery “assistants,” a list that is compiled through the help of some sort of paranormal database that isn’t really explained. Even in the book, I cannot quite recall how the characters were selected to join Markway. They were sent letters of being invited, but that’s about it.

Next we’re shown Eleanor fighting with her sister and her sister’s husband over the use of the car that had belonged to their now deceased mother. I’m glad the movie included this as it for the most part matches to how i pictured it from the book. Eleanor’s family is nasty and horrible and I was ecstatic when she took the car without consent. The drive to Hill House is cut short, which is a bummer. I kind of liked it when she stopped to eat, enjoying being on her own without anyone to depend on or to depend on her. And how the closer she got to town the more weird the townsfolk got.

At the house, Eleanor is first to arrive. While I’m  not a huge fan of excessive inner monologue, in this old school black & white it adds to the creepiness, especially later on when Eleanor begins to doubt her own thoughts. The Dudley’s are charming. We only see Mr. Dudley at the gate. Mrs. Dudley does her bit about her schedule and how they don’t stay in the house after dark and how far away the town is and how no one will hear them scream, etc. etc. The next house guest arrives soon thereafter. Theodora is as in the book, she is someone who has experienced life’s riches and is used to being the center of attention. In the book, I recall she was very kind with Eleanor with moments of being stuck up, especially later on the in the book. In the movie, she’s kind of an asshole with small moments that are seemingly sincere niceness and concern.

Luke is the only other guest, just like in the book. In the movie, however, he’s more skeptic and pragmatic then i remember. More interested in making money on the house in the film and doesn’t click with Markway as he does in the book. Still, his character is charming enough to be entertaining. His skepticism is a good balance with everything going on. And when he begins to doubt his own doubts, well…that makes for true horror and gives the movie more teeth. The revelation of the “cold spot” was really cool as an unexplainable phenomenon.

The movie moves along rather quickly. Skipping over a few of the scares that are mentioned in the book, The Haunting does include some of the more memorable scenes, such as the “Help Eleanor Come Home” written on the wall bit, Eleanor believing she was holding Theo’s hand when it turns out they are across the room from each other, and the banging on the walls with the sounds of some hell hound howling in the hall. There was an extra scene that I do not recall from the book, that of Eleanor dancing in circles while humming to some gentle melody. The newest adaptation, Netflix’s The Haunting of Hill House, gave a superb nod to the moment in The Haunting. The way Eleanor acts, as if she were drunk on the house itself, is mesmerizing and absolutely believable, which makes it even more chilling to watch.

Dr. Markway’s wife, Grace, makes a sudden appearance hoping to convenience her husband to abandon his “silly” pursuit of the supernatural. He refuses of course and Grace sends away her cab, refusing to leave without him. This is a major change compared to the source material. In the book the wife arrives with a companion named Arthur Parker, a headmaster of a boys’ school. They both show early on in the story to help investigate the house. In fact, the wife isn’t even a skeptic, she’s completely invested in the supernatural, including séances and spirit writing. Obviously some changes need to be made to keep the pace of the movie moving along. I do not completely disagree with this change up either. Dr. Markway seems to me to be more of an anthropologist who dabbles in the paranormal. And his wife is a concerned loved one who simply wants to protect her husband from himself as much as she can. This makes for a deeper story, I think. Arriving at Hill House, as a non-believer, she becomes a hostage of sorts and soon goes missing.

For those who have read the book or seen other adaptations know who the house really wants. The writing was on the wall, so to speak–and quite literally. But if you are a virgin to the story, I shalt not ruin the surprise. I will say though that the book and the 1963 adaptation are very similar with minor changes, some of which actually improved the ending significantly. As for the most recent adaptation, Netflix’s The Haunting of Hill House, if you’ve seen the movie and haven’t read the book, you need to read the book. If you haven’t seen the show or movies nor have read the book, you needn’t worry. Nothing will be spoiled. The show borrows from different source material (not just Shirley Jackson’s novel) while attempting to maintain some framework of originality. Truth be told, it is an enjoyable and faithful take on a story that is nearly 60 years old. The 2018 show’s ending totally pissed me off, but hey…I’m ready for a second viewing with the hopes that perhaps I missed something that would make it better. As for 1963’s The Haunting, for those in the market for classic ghost movies, this is the one to watch.

homas S. Flowers is an Operation Iraqi Freedom and Enduring Freedom Army veteran who loves scary movies, BBQ, and coffee. Ever since reading Remarque’s “All Quiet on the Western Front” and Stephen King’s “Salem’s Lot” he has inspired to write deeply disturbing things that relate to war and horror, from the paranormal to his gory zombie infested PLANET of the DEAD series, to even his recent dabbling of vampiric flirtation in The Last Hellfighter readers can expect to find complex characters, rich historical settings, and mind-altering horror. Thomas is also the senior editor at Machine Mean, a horror movie and book review site that hosts contributors in the horror and science fiction genre. You can follow Thomas and get yourself a FREE eBook copy of FEAST by joining his newsletter. Sign up by vising his website at www.ThomasSFlowers.com. 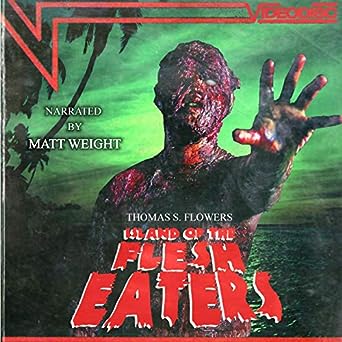 This entry was posted on February 8, 2019 by Thomas S Flowers. It was filed under Horror, Movies, Reviews and was tagged with 1963, blogging, Classics, Horror, horror movies, life, movie reviews, paranormal, reads, Reviews, Shirley Jackson, Supernatural, The Haunting, The Haunting of Hill House, thrillers.