Paranormal & Supernatural in Review: The Possession (2012)

Synopsis: A young girl buys an antique box at a yard sale, unaware that inside the antique box lives a malicious and ancient spirit. The girls father teams with his ex-wife to find a way to end the curse upon their child.

Jeffrey Dean Morgan stars in The Possession, a horror film that focuses more on drama than on straight-up scares. The film is labeled as a horror film but at the end of the day, this feels more like a dramatic character study about a father trying to be the best dad that he can be during the limited time he gets to spend with his two daughters.

The Possession is another one of those “Based on true events” films that has plagued theaters and home video. At times it The Possession feels like something the hollywood machine just simply spat out – but those feelings only came up at a couple of moments and it is mostly due to the overabundance of possession and demonic invasion films that have been released over the last decade.

The Possession came to us early on in the glut of paranormal films and I feel like it has kind of fellfallen to the wayside a bit. I know that I personally had full intentions of seeing it during its initial theatrical run but unfortunately, the film came and passed before I had the opportunity. I try my best to see every horror film I can in theaters but the stars just didn’t align for this one- hell, I didn’t even realise I owned this on DVD until this morningpast week. I will say, looking at the box art- it screams of being a wannabe Exorcist. There is something about the shade of green used and the way the young girl is posed in the cover image that looks like they were trying in some way to pay homage to the iconic classic film.

Like all films, this one has it’s pros and cons. Looking at the pros Id, I’d like to start by stating that the best thing about this film is it’s lead- Jeffrey Dean Morgan. I, like most horror fans became a fan of his through his portrayal of Negan on The Walking Dead and it was nice seeing his take on a completely different kind of character. He has a presence that captivates when he is on screen and lucky for the film, he is in ninety-nine percent of the scenes. All of the other actors fell a little flat for me except for Natashia Calis. She was able to carry herself almost as well as Morgan but at times, falls a hair short in comparison. 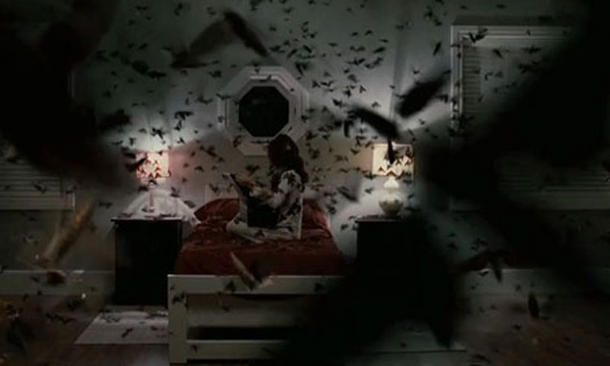 Despite only having two performances that intrigued me, the film itself captured my attention right away and didn’t let go. They throw us right into the story by introducing us to an elderly woman who has an antique box. It is obvious from the start that the box is and will continue to be a source of evil in the film through some terriblegeneric scoring and sound design. We watch as the woman takes a hammer and attempts to destroy the box but the power within the box stops her. This is where another compliment I have to give to the film comes in.

Most of the visual effects in The Possession are surprisingly well crafted. In the opening scene we watch the above mentioned woman become a victim of the malevolent force contained within the box and the way they captured it on screen was interesting. Let it be known, there is nothing new in this film that we haven’t seen in so many others but the filmmakers clearly had a vision for how they wanted to portray someone under the command of the spirit or being affected by it. We watch as this woman’s face begins to droop on one side, almost as if the box is forcing a stroke onto her. There was just something about that moment that made me need to pause the film, and re-orientate myself for what I was about to see. My hope at that point was that if they couldn’t deliver a compelling story, maybe I could at least get some fun visuals for ninety minutes.

With that in mind, I continued watching The Possession and found myself compelled by the two lead characters. I was engaged and truly cared about the father’s plight, trying to be a dad and dealing with everyday bullshit that comes up. Morgan’s character portrayal felt real to me. I will say it again, he is the best thing about the film. There are also some other interesting moments that arise throughout the course of the film that I won’t spoil for you because I am going to recommend this one. I want you to go in and check this film out for yourself, at the end of the day you will anyway if The Possession has even remotely struck any sort of interest with you at all. The film could have the worst rating on Rotten Tomatoes but let’s be honest, we will still go see it because it is all subjective. I had a great time watching this one but you might hate it and think it wrote, generic crap. Right?

The film takes off right from the start and yes, it dwindles and dies down for the remainder of the first act but as we go into the second act, The Possession begins to ratchet up the tension. The down times are utilized to help endear you to the main protagonist as we simultaneously watch his daughter become consumed by the force within the box. The Possession is a fun little ride that I would recommend highly to those who are looking for something a little tamer that still carries just the right kind of edge. Have you seen it? I would love to hear your thoughts on it, leave a comment down below, let me know if you enjoyed the film as much as I did, or if you hated it and why!

This entry was posted on January 25, 2019 by Thomas S Flowers. It was filed under Horror, Movies, Reviews and was tagged with blogging, Demonic, Horror, movie reviews, Movies, paranormal, possession, reads, Reviews, Supernatural.