As you no doubt have noticed from the fancy title above, we’re kicking off 2019 with a brand new “In Review” series focusing on both the paranormal and supernatural within the horror genre. Obviously there are a lot of paranormal and supernatural themed movies out there, so to keep things as unison as possible, we’re going to walk that fine gray line of all things ghostly and demonicly. Believe it or not, Amityville II: The Possession is the perfect movie to start with as it too walks the line between paranormal hauntings and supernatural possessions. Plus its pretty twisted and stars Burt “Paulie” Young. So sit back and hang on as we explore one of the most insidiously fun movies 1982 ever spawned.

One of many interesting things about Amityville II is, despite what the above synopsis implies, I do not think the “house” changed much of who the family was before they moved in. Case in point, the relationship between Anthony (played fantastically seedy by Burt Young) and his son Sonny (played by Jack Magner, who looks a lot like Alfie Allen, right!). As Anthony scolds his son for not following the rest of the family on their drive to the house, we quickly realize this is not the sunny happy family from the first Amityville movie. He demands respect and threatens when it is not given. And Sonny, the “first born,” as his mother calls him, is at that tender age between rebellion and obedience. And truth of the matter, the only thing keeping him obedient is fear.

As the family begins to unpack, we get a strong “haunted house” type vibe. Even the movers are looking up at the tall windows and shuddering. The mother (played by Rutanya Alda) has a few early on paranormal experiences. The sink gushes what appears to be blood. Then again in the basement after one of the movers discovers a “hidden room” not included in the blueprints of the house, a disembodied spirit hovers near her, taunting her. And all the windows are nailed shut…how odd. Why would someone do that? Strange. Oh, at this point I feel like I should mention that despite the Amityville II title, this movie makes no mention of the Lutz family or the 1974 DeFeo mass murders. The implication, I think, is that the Montellie family moved into 112 Ocean Avenue after the Lutz abandoned the house and it went up for resell. 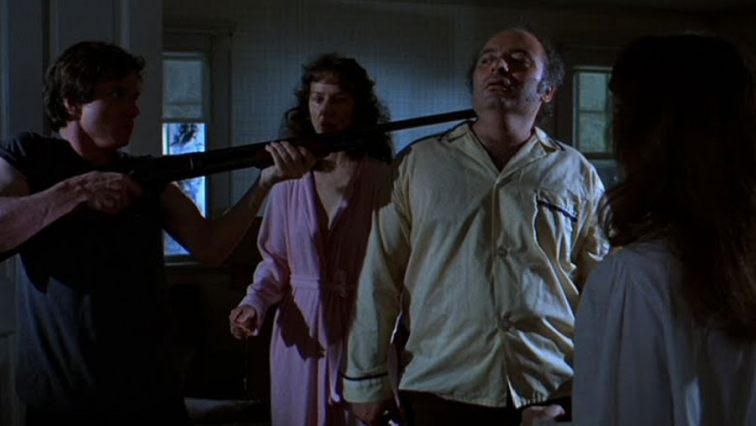 On the first night all hell breaks loose. There is no build up to create any sort of tension, yet tension is keenly felt as we watch this already dysfunctional family come apart. Anthony and his wife are already on edge about something (sexual frustration, I think) and then “someone” starts knocking on the door. While pops in running around with a shotgun, the spirit graffitis the younger kids’ room. Naturally, Anthony thinks they drew all over the wall. He puts down the shotgun to take off his leather belt and goes after the kids in a rampage. Mom gets slapped down for trying to protect them. She goes all crazy eyes and claws him. The oldest daughter, Patricia (played by Diane Franklin, more or less the peacemaker of the family) walks down and tries to defend her mother by pleading with Anthony to stop. Mass hysteria. Cats and dogs. You get the picture. Finally Sonny joins in the mix, picks up the shotgun, and presses it behind his dad’s ear. With the presence of the gun, the brakes get put on real quick and everyone backs off retreating to their own corners of the house.

Whatever “spirit” is haunting the house, it isn’t too thrilled that Sonny didn’t pull the trigger splattering the wall with Anthony’s brains. So, it takes matters into its own hands and while the family is away possesses Sonny. [PS: the family is away so that Anthony can apologize to Father Adam for being a big bag of dicks when the Father came to “cleanse” the house. I’m not Catholic, so I can only assume that’s something Catholics do, they bless their new homes? Or something?] Another case in point, the Montellie family is already so dysfunctional enough that the evil spirit doesn’t even need to threaten the priest. Kinda sad actually. But if Paulie was my dad, I’d probably be dysfunctional too.

Where was I? Oh yes.

What? Yes, you read correctly. Amityville II: The Possession has incest. When you go back and watch the movie again, knowing what will happen, you kinda see weird little moments between them. Moments that didn’t seem weird to me the first go around, but are now ruined by the knowledge that Sonny and Patricia boink. Thankfully the scene is not prolonged nor gratuitous . We basically get Sonny playing a eeky game called “modeling,” where he asks Pat to sit on the bed and model for him. She does, playfully mind you. And then he asks her to take off her nightgown. “What?” she asks. He wants to see if she is “truly the most beautiful model.” And so, she complies…cause, you know…why not. Gross. He stares at her topless. Gross. And when she attempts to put her nightgown back on, he stops her and…well, you know. Gross. 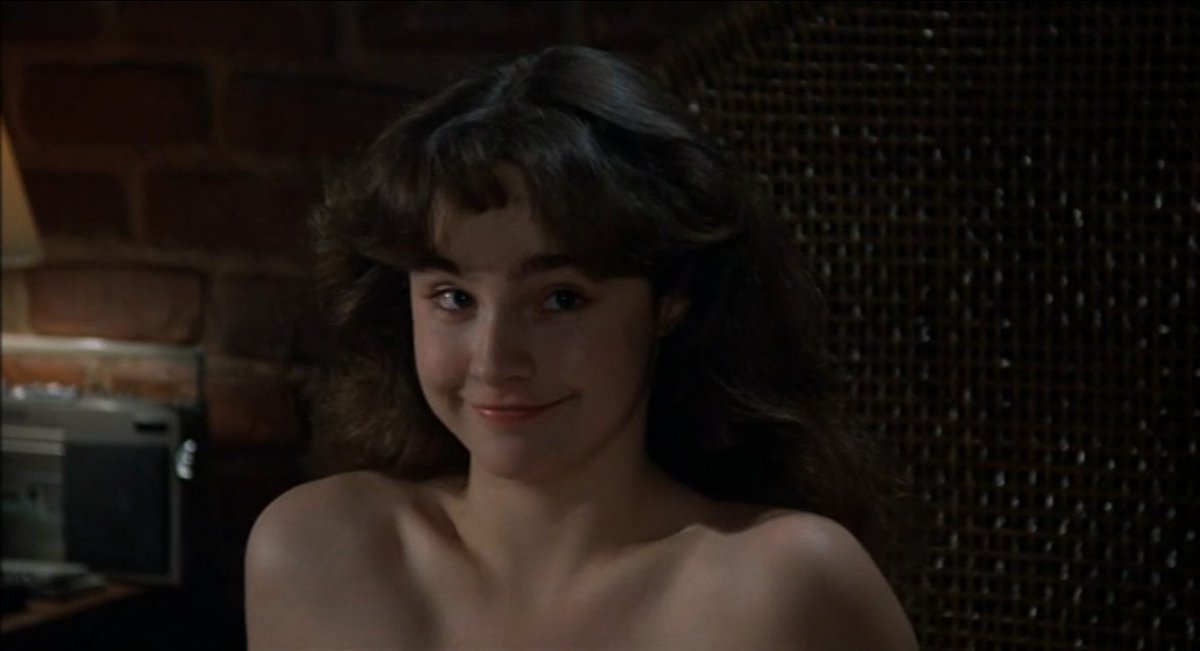 Patricia is confused, for obvious just boned my brother reasons. She attempts to confess to the family priest, Father Adam. Its actually a very sad and creepy confession that needs to be seen to appreciate. But then, at Sonny’s birthday party she sneaks up to Sonny’s bedroom (who is also hiding out) and tells him she isn’t sorry for what happened between them. See what I mean, confused. Playing up the duality between attraction and repulsion (having the urge to do something that you know is wrong).

Sonny on the other hand is going through some sort of demonic metamorphosis. Not only has his demeanor changed but his body is beginning to deform too, as if the demonic entity inside him is growing. He refuses to see anyone and harshly dismisses an already shattered Patricia. During the party, mommy dearest discovers that her two eldest children have been…consummating (gross) and decides its time for Father Adam to return and purify the house. Father Adam agrees and goes around sprinkling holy water and such around the house. In an interesting scene, the mother asks the priest to “please bless my bed,” which to me seems an odd place to require holy sacrament, the priest even looks a little mystified by it. Throughout the first half of the movie, there’s an implication that mom and dad have not been…you know.  I’m not sure what it has to do with the plot of the movie. Maybe I need to re-watch a few more times.

Anyways, as Father Adam blesses the martial bed, the house attacks him with horrid hallucinations of blood. He comes to the conclusion that the house is possessed and requests for an exorcism from the Chancellor (never actually given a name). Requests such as these take time. Father Adam agrees to join a friend and fellow priest Father Tom on a camping trip. And while away, the demonic presence takes control over Sonny and forces him to murder his family, even Patricia who is the last to go. Its a crazy moment in the film and Sonny is completely deadpan throughout, which makes it even more chilling. Back in the cabin in the woods, Father Adam wakes from a nightmare, a precognition of the crime. He hurries back to Amityville too late and discovers the entire Montellie family slain, all except for Sonny who claims he doesn’t remember what happened.

Things kinda play out and eventually Father Adam discovers that it wasn’t just the house that was haunted/possessed, but that there was a demonic spirit that has now possessed Sonny. The courts of course do not deal in parapsychology, so they lock Sonny in a high security ward where the demon slowly kills him. The priest wants to perform an exorcism, with or without the Church’s approval, in order to save Sonny. But he’s having a hard go at it. Eventually, all things lead back to the house on 112 Ocean Avenue for a very epic showdown between Father Adam and the demonic manifestation inside the meat puppet that is Sonny Montellie. 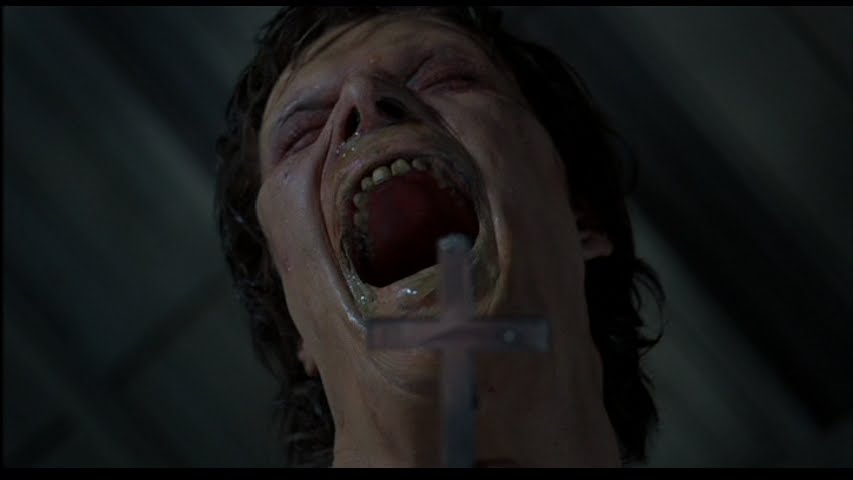 It may be surprising, especially if you’ve seen Amityville II, but this is my favorite of the Amityville series. Yes, even better than 1979’s original masterpiece  The Amityville Horror. I’m not really sure why. Part of it was the insanity that was the plot. The practical effects are also fantastic. And the casting was perfect, even Burt Young seemed natural as the mean spirited bag of dicks father, go figure huh? Innocence lost. Haunted house. Demonic possession. This movie was like The Amityville Horror wrapped inside The Exorcist. A must watch fun ride that doesn’t take itself too seriously.

For fans who love Lucio Fulci’s ZOMBIE and Bruno Mattei’s HELL OF THE LIVING DEAD comes… ISLAND OF THE FLESH EATERS!!!

(available on eBook and paperback)