We close out this years Slashers & Serial Killers in Review with not the best slasher serial killer movie. Not the corniest. Not the goriest either. Stay with me. What made Silent Night, Deadly Night one of the most memorable slashers of the 1980s and how it cemented in our final review of slasher and serial killer movies was the outrage from PTA type super-moms (think Kyle’s mom from South Park) that would shadow over the slasher horror sub-genre for the rest of its days. And yes, i do consider the slasher era to be over. We may get strays in every now and again, but its fundamentally over. Just like the Universal Monsters. Yeah, that 2010 remake of The Wolfman was alright but we need to face the hard truth, the newer Hollywood attempts to recreate the Golden Era feel like a drunk uncle trying to be cool in front of his nephews and nieces with a box of Pop-Its.

Reeling it back in, here is my review of Silent Night, Deadly Night…

The movie opens with a family taking a drive out to see grandpa who happens to be a patient at a mental institution. The protagonist/antagonist (more on that later) Billy is worried they won’t make it back home in time for Santa to visit. That’s right, this is a Christmas move. Thought that might have been implied already. So, seems like old loony grandpa is catatonic and while mom and dad go off to talk with the doc about further treatment, pops looks over at Billy and tells the young boy that Santa only brings gifts to boys and girls who are good. And he asks Billy if he was good all year. No child nor adult is ever truly good, so the boy shakes his head no. Grandpa smiles cruelly and warns him that Santa will be coming to punish him. This obviously scares (and scars no doubt) 5 year old Billy.

As the family makes their way back home, they pass a broken down car with Santa waving them down. It has been established with a cut scene that this particular Santa is a violent criminal, FYI. Billy warns his parents to keep driving. Thanks to crazy grandpa, he no longer trusts Santa Claus and fears that Old Saint Nick will punish them because they have been naughty (also establishing the idea that not just children but adults get punished if they are not good). Despite Billy crying not to stop, the parents stop to help anyway. And why not? In what horror movie do the parents ever listen to the warnings of their children?

The Chapman’s are killed, naturally. But not before Billy is able to escape from the car and hide in a ditch. He watches as the killer Santa drags and attempts to rape his mother. The killer slices her throat in the struggle and then stumbles toward the ditch looking for Billy.  There’s an interesting dissolving sequence with the killer heckling him and the murder of his parents. He has a baby brother too who is crying in the car, but we don’t really find out what happens to him. The assumption is that the baby is killed. Or lives and comes back in later sequels….

Five or six years later, we find Billy in a Catholic orphanage. You know, cause Catholic orphanages are known in fiction to be really nice places to live. He falls under the tutelage of Mother Superior (played fantastically by Lilyan Chauvin) in which she works hard to force Billy to get over his emotional trauma (they actually call it PTSD, which I find interesting for my own reasons) of watching his parents get brutally murdered by making him sit in Santa’s lap, telling him that sexuality is evil, and all that fun stereotypical nun stuff.

We get put in the time warp again and some years later we find Billy (played as an adult by Robert Brian Wilson) all grown up. He’s a nice enough kid looking for work due to aging out of the orphanage program.  Sister Margaret (the “good” Nun played by Gilmer McCormick) helps Billy obtain employment at Sims Toy Store (why a toy store and possible trigger to his traumatic memory? Makes about as much sense as hiring a combat veteran with PTSD to work in a fireworks shop, and yes i can joke about that as I myself am a veteran living with traumatic memory). 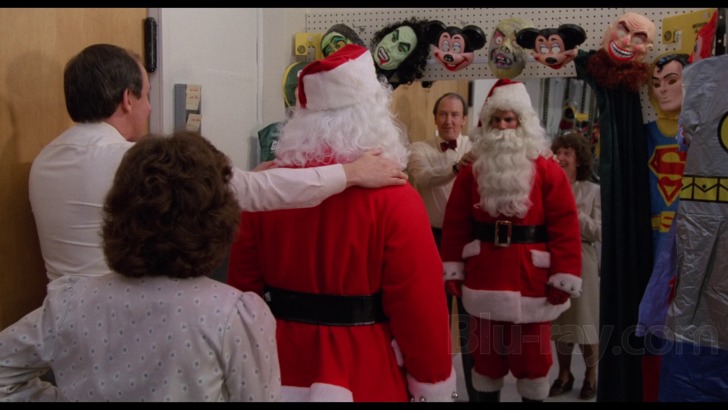 We get some Hallmark styled montages of Billy working at the toy store. And you know what, that kid works hard. He’s respectful to his boss. He helps the customers. Even when he clocks out for the day, if he sees something amiss he fixes it on his way out. He’s a model employee who even gets a crush on another employee. Things seem to be going perfectly until…Christmas arrives. As you can imagine, Billy becomes more irritable. Most of this is internalized. I don’t recall seeing him actually going off on anyone. He’s even still loyal to his boss and agrees (more or less) to put on a Santa suit to take pictures with all the snot nosed kiddos.  This of course prods Billy’s dissent into madness, but even still, you can see he’s trying to cope despite the reoccurring nightmares and bully co-workers.

On the night of Christmas Eve as Sims Toy store closes for the holiday and the company party begins spells certain doom. At this point, Billy is nearly paralyzed with shock, overwhelmed by all the triggers he has been forced to endure. While everyone is getting their merry on, Billy slips precariously toward his breaking point. He follows two fellow employees, the bully and the girl he has a crush on, into the back room where some really naughty activity happens. He watches as the bully attempts to rape the girl he has a crush on (rather horrific moment), this scene is juxtaposed with flashes from his own trauma and the attempted rape and murder of his mother. He wants to help, to do something, but he’s frozen by fear until finally whatever tethered him to reality snaps and he kills the bully and his would-be girlfriend thus beginning his night of mass murdering mayhem that comes to a dramatic conclusion back at the orphanage where he was raised and tormented by Mother Superior.

And that in a nutshell is Silent Night, Deadly Night.

The movie was pitched as another slasher film that utilizes an easily associated gimmicky formula, Christmas + slasher = Hollywood gold. Silent Night, Deadly Night, however, despite all the other predecessor horror holiday movies (you know, like Silent Night, Bloody Night, or Black Christmas), became one of the most despised horror movies of the 1980s, spawning “protests [flooding] Milwaukee radio and TV stations, most from a group calling itself Citizens Against Movie Madness, led by two local mothers” (Variety Magazine) and galvanizing protesters to carry signs with messages like “Deck the halls with holly, not bodies,” and “Santa’s not a hit man.” Denise Giordano, who organized the Brooklyn protest, told the New York Daily News, “The movie violates everything I believe in; it’s taking the spirit out of Christmas.” Bayport, Long Island, resident Dennis Colasunno told the paper he saw the TV commercial with his three young children, and “it scared the hell out of my kids — this commercial has ruined Christmas for my children” (New York Daily News).

One would have thought this would have been marketing gold and Silent Night, Deadly Night would have went on to become the most popular horror slasher of all time. Sadly, it never did, and producers eventually folded and pulled the movie from theaters.

All the reactionary shenanigans ending with the powers that be pulling the movie was the real Christmas tragedy. Had they watched the movie, parents may have discovered that Silent Night, Deadly Night wasn’t just another slasher movie to corrupt the youth of tomorrow. Silent Night, Deadly Night was a watered down version of high fidelity serial killer films (you, the kind that go on to win a bunch of awards for being so progressive) with a deeper morality lesson. Watching the movie, its difficult to discern who the villain really is. In Friday the 13th part 2-X or Halloween or Nightmare on Elm Street its pretty fucking apparent who the bad guy is. But was Billy Chapman really such a bad guy? Yeah. He went fucking nuts and killed a bunch of not so good people who didn’t deserve to be killed. Billy isn’t innocent. The dude went over the edge and down the cliff in an explosion to envy Michael Bay. But Billy was the victim too. Recall what happened to his parents. Recall the decades of continued abuse at the hands of an overpowering authority figure (Mother Superior) who did more damage to Billy’s already damaged psyche than the killer Santa that offed his folks. Recall how hard he worked at being a good guy. No, i think the real bad guy here is Sister Margaret who knowingly put Billy in a situation he could not cope. That’s not just recklessness, that’s criminal negligence and borderline negligent homicide. Sister Margaret knew what Mother Superior was doing was wrong and damaging to Billy, but she allowed it to go on and never reported it. And she got Billy the job at a fucking toy store. Out of all the jobs she could have helped him get, she goes with toys, as if toys weren’t in the least associated with Santa Claus and Christmas. 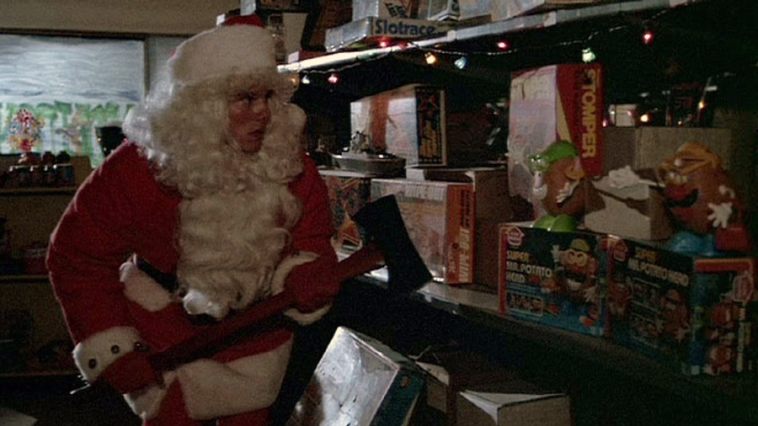 Oh well. Silent Night, Deadly Night has since become a rather popular cult classic, especially among audiences my age who were too young to see it in theaters back in 1984 anyways. This should be a must watch on any horror fans list, Christmas or otherwise. The cinematography and acting and plot does fill watered down, but the consequences and implications of the story feels deeper than it probably should be. Top that with the fun kill scenes, you’ve got yourself a not so silent night of fun.

Houston, Texas, 1985, while investigating the affluent and seedy Gasper family, Rachel Hawkins, a junior reporter with the Galveston Daily News, stumbles upon a story that will make her career.

Billy Gasper, son to the billionaire tycoon Gasper Family is missing. His yacht found near the Port of Galveston, abandoned all but for a seemingly deranged captain. Where are the crew? And where is Billy?

Meanwhile, while searching for his missing sister who was last seen with her boyfriend Billy Gasper, RadioShack manager Mark joins an ex-military security team hired by Mr. Gasper to find his son. Hidden away, Hawkins joins Mark and the hired goons as they race across the Gulf of Mexico to a private tropical island resort.

And don’t forget to check out senior editor Chad Clark’s top reads for 2018!