Nostalgia’s a funny old thing. Looking back over past events, with or without rose tinted glasses, distorts the memory, plays havoc with the senses, even drive people to despair. It can also make bad films seem like Oscar winning works of art. Back when I was a youth (complete with a full head of hair but still equipped with a cheeky endearing smile), there was this thing known as the ‘Video Nasties Bill’, a slice of legislation obviously designed to keep impressionable youngsters like myself free from the corrupting influence of films like The Beast in Heat, Driller Killer and of course The Texas Chainsaw Massacre. The fine Whitehall mandarins who crafted the bill didn’t take into account the craftiness of adolescents, pirated videos and the long dead Betamax format.

I still managed to see most of the so-called ‘Nasties’ in an age where these gorefests were as rare as rocking horse shit. Not all horror films made their way onto the list of banishment however. Some were released on VHS with all the juicy bits cut out. Maniac, the Friday the 13th offerings, Dawn of the Dead – all of these were shorn of their glorious blood soaked special effects scene. But I still enjoyed them, cut or not. I was young, shouldering a schoolyard reputation of the quiet horror hound. Amongst the ‘cut to shreds’ offerings I watched was an American slasher flick called Rosemary’s Killer here in the UK, better known as ‘The Prowler’ on its home soil. My memory of thar film was  a good one so when Thom offered me the chance to review it, I jumped at it.

As I said, nostalgia’s a funny old thing.

The Prowler, released in 1981, was part of a wave of ‘slasher’ pics hastily commissioned in the wake of the success of ‘Halloween’ and ‘Friday the 13th. The genre was a good earner. All you needed back then was a good-looking teen cast, an out of the way location and a hook to hang the film on (mostly memorable dates or memorable ways of murdering people). If your budget stretched to it, you could draft in the ‘Meistersinger of Monstrosity’, Tom Savini,to handle the wetwork. The Prowler is no different. The cast,, headed by Vicky Dawson, are all young fresh-looking teens, the setting is the fictional town of Avalon Bay and Mr Savini is on hand to provide the gore. So far, so good.

The film kicks off with old newsreel footage of G.I’s returning from WW2 then segues into a break up letter from Rosemary Chatham breaking up with her sweetheart as he’s been away too long. Bit harsh, I thought. The poor guy’s been off fighting Nazis, not having a jolly with the lads in Ibiza.

Cut to June 1945 and a graduation party is in full swing. Rosemary Chatham and her new love are in attendance when they do the honourable ‘teen in a horror flick thing’ and go off to a secluded spot to make out before being rudely interrupted by an army uniformed assailant with a pitchfork. The night doesn’t end well for the two lovers, but the killer leaves a rose behind at the scene. Considerate.

Flash forward to 28th June 1980 and the graduation ball is back on after a hiatus of 35 years. Organised by the principal character Pam Mcdonald (Dawson), the town veers between excitement at the ball and the town old timers reaction of ‘pesky kids with their long hair and pot smoking. The town sheriff decides to go off fishing rather than facing drunk teens and leaves his deputy Mark London (Christopher Goutman) in charge. As night draws in, the kids head for the ball, leaving stragglers conveniently back at their dorm to get picked off at the killer’s leisure, a kind of serial killer warm up if you like. These scenes are interspersed with our army uniformed killer, sheathing knives, bayonets and loading a shot gun.

After the first two victims are discovered, the ball is placed on lockdown but as ever, one of the characters decides to go for a dip in the pool, meeting her maker early and also causing one of the chaperones to meet an untimely death.

London and Mcdonald, meanwhile, break into the house of Major Chatham, Rosemary’s father and deduce that the original killer was never caught. The last act lurches from Rosemary’s desecrated grave to the unmasking of the murderer, summarily dispatched with a shotgun blast to the head and a cheap jump scare right at the end of the film.

Nostalgia. We keep coming back to that. In my mind, The Prowler, as seen by the 13 year old me, was a tense taut horror masterpiece. Seen through older eyes, it’s anything but. The actors seem tranquilised, even when threatened with impending death. Dawson’s reaction to her friends being offed by a gas mask wearing psycho consist of wide eyes, a gasp, then normality. Between the killings, the film meanders along at a sedated pace, showcasing some very bad dancing and a band that only seem to know one song. Ok, I hear you say. It’s a slasher film, not Citizen Kane. That’s a valid point but when set aside Friday the 13th and Halloween, The Prowler falls short of the mark. Director Joseph Itzi stated that he was attracted by the ‘dream-like quality’ of the script. To my mind, this is more like a coma than a dream. 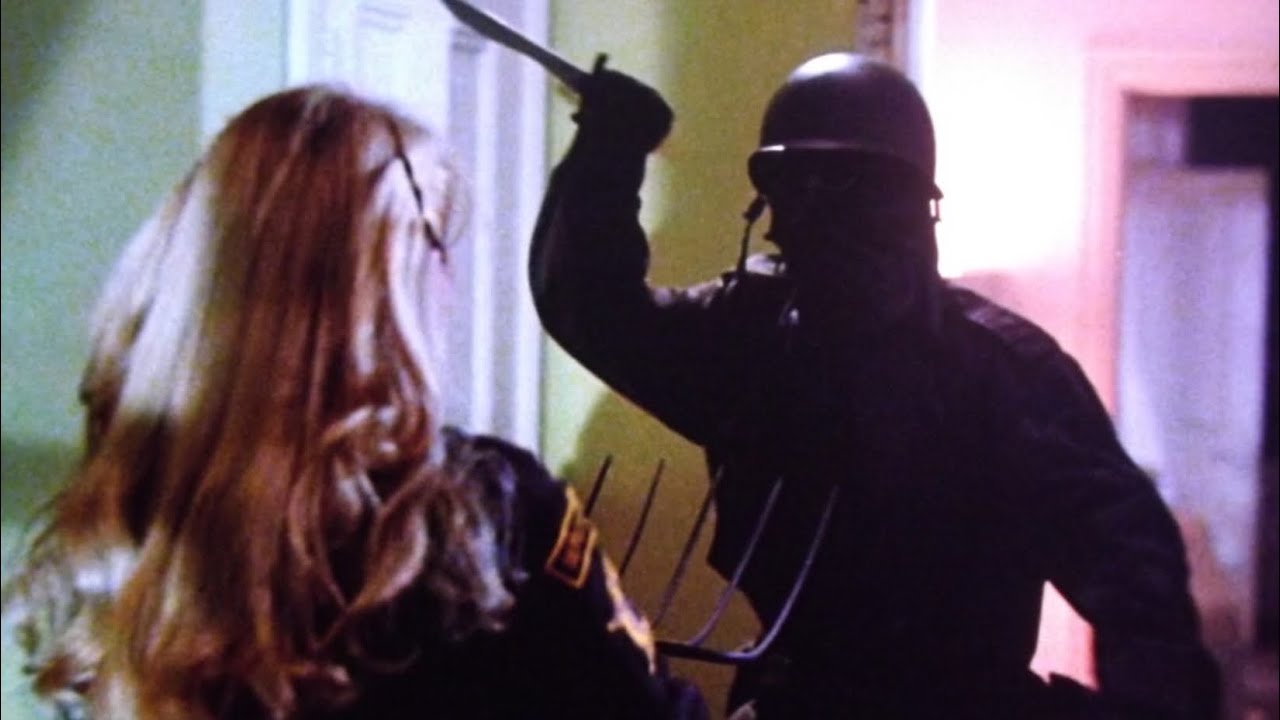 The saving grace is Tom Savini’s excellent effects work. Bayoneted skulls, bayoneted throat and an amazing exploding head showcase a man at the height of his powers. But even these scenes take too long to get to. Instead, the viewer has to endure bad dancing and that excruciating band.

Maybe I’m being a little to harsh or maybe time hasn’t been kind to The Prowler but I didn’t feel any tension, only irritation at the Bernard Hermann-esque squealing violin soundtrack, disappointment at the acting and boredom at the filler scenes between kills.

Nostalgia definitely has much to answer for in this case.

Born in the leafy peaceful surroundings of Leamington Spa, J.G Clay is the Midlands Master of The Macabre. Now in his early forties and residing in the leafier English county of Northamptonshire, Clay’s boyhood dream of bringing his unique combination of cosmic horror, dark fiction and science fiction to the masses is being realised. With the first volume of ‘The Tales of Blood And Sulphur’ under his belt, he is poised to unleash Gods, Monsters and weird events upon the world. Under Clay’s guidance, the Dark will become a little darker and Horror will go One Step Beyond. When he is not destroying worlds, J.G likes to spend time with his family and friends, exploring the world of bass guitar, adding to his eclectic collection of music and watching as much geek TV and film as his eyes and brain will allow. He is an avid reader and a long suffering but ultimately optimistic fan of Birmingham City FC. He hates cucumber, extremists of all stripes and colours and reality TV shows. 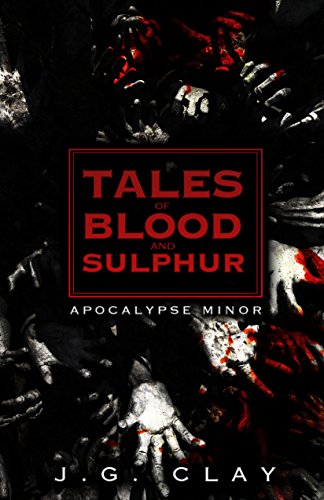 “Eleven Tales steeped in Blood and reeking of Sulphur”